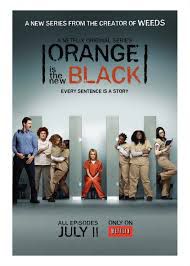 As with any book-to-film adaptation, there are clear differences between Piper Kerman’s 2010 memoir Orange is the New Black: My Year in Women’s Prison and this summer’s Netflix Original adaptation, with Weeds creator Jenji Kohan at the helm.

There are dozens of ways the show changed in its book-to-TV adaptation. The character of Delicious in the memoir is renamed Taystee in the series, Yoga Janet becomes Yoga Jones, the guard “Gay Pornstar” earns the even nastier nickname “Pornstache.” “Crazy Eyes” is Latina in the memoir, and isn’t NEARLY as aggressive as her African-American television counterpart. In the memoir, Piper’s fiancé Larry is basically perfect, on the show he’s a bordeline-offensive Jewish cliché who jump-starts his writing career by stealing Piper’s best prison material for his Modern Love column (a real-life event that wasn’t nearly as creepy in real life) and a segment on a This American Life-like radio show. And, my personal favorite, the prison jackets are “ugly” in the memoir, on film those coats are so bad-ass I’ll bet you my Netflix subscription that Old Navy and Forever-21 are racing each other to see who can mass-produce that shit by Christmas first.

As a memoir, Orange is the New Black is cover-blurbed by Eat, Pray, Love author Elizabeth Gilbert, and this makes ALL the sense in the world. Orange is the New Black is of the Eat, Pray, Love tradition: a skinny, blonde, upper-middle-class white woman becomes a fish out of water and through her misadventures, finds herself. The world is interesting enough, the prose is good enough, every problem is resolved and tied up with a neat and pretty bow. I don’t mean to damn with faint praise. The book works. It’s a good book. If you like this type of memoir, you should read this book.

As a television show, Orange is the New Black is a game-changer. We start with Piper as our touchstone, but we quickly find ourselves amidst an ensemble of female leads who are black, white, Latina, old, fat, gay, transgender, track-marked, meth-teethed, or, in other words, the kinds of women that usually get two lines on NCIS before they are shot or led away in handcuffs. This is truly a feminist’s show. And it’s not just feminism for cute, young white girls (see, well, Girls). It’s feminism for women, all women, we all see ourselves on this show, this show says no matter what we look like or where we come from, we are worthy of being watched and listened to, our stories are worth caring about.

Instead of slapping the Bechdel Test on this show (like I’ve had to do with almost all other new media I’ve consumed this summer), I had to do a REVERSE Bechdel Test on this show (Are there two named male characters? Do they talk to each other? Do they talk to each other about something other than a woman?) I’m not sure this show passes on account of that last question. And after years of watching film and television fail the regular Bechdel test, I’m okay with that.

This isn’t to say Jenji Kohan for the win, Piper Kerman for the lose. On the contrary, Piper Kerman is a consultant on the show and appears to have a lot of influence on the content. So Jenji and Piper both for the win, together they’ve made a hell of a team. I usually hate giving the adaptation more props than the book it was based on, but with Orange is the New Black, I don’t have much of a choice. As a memoir, it played right into its genre. As a television show, it’s changing the cultural conversation of who is worthy of having their story told. Whatever splash it made as a memoir can’t compare to the tidal wave it’s made as a television show. I can’t wait to see the aftershocks that follow.