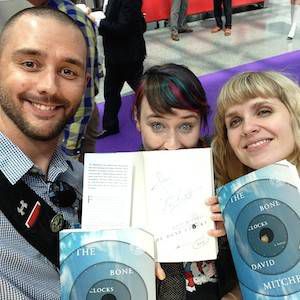 Because we nearly didn’t.

It was a time of great confusion. May 30, 2014. The second day of BEA for the four of us. The jovial, “Oh my goodness these books are all free” attitude of that first halcyon day had faded. People were getting crabby. After so many hours in a convention centre, attendees were forgetting their families, their humanity, and what it’s like to spend less than $12 on a bottle of water.

The David Mitchell signing was scheduled for 2 pm that day, but people started milling early. Random House would later tell us how surprised they were by the massive turn out for David Mitchell, which is totally understandable. It’s not like there was a giant 40′ x 50′ banner in the lobby of the convention centre advertising his new book, The Bone Clocks, and the signing and everything. Unless… We were told that at about 1:30, Random House would begin to give out tickets for the signing, and if we stayed near-ish the desk at the front of the booth we would be fine. We camped out there for a while. I lit a small bonfire and Josh made s’mores. Liberty composed epic poetry. Rachel was pregnant. We bonded. Occasionally, other Rioters brought us provisions. We knew we had a long wait ahead.

But then we were told to go and find the end of the e. lockhart line, because David Mitchell’s line would start there. Now e. lockhart, as it turns out, is kind of a big deal, and the line of people trying to get that book signed was approximately 48 miles long (conservative estimate). We used the rest of our provisions searching for the end of the line, but when we got there, something felt wrong. It didn’t feel likely that this place, somewhere south of Newark, New Jersey, would really be the start of the David Mitchell line. I left the group to return to the Random House booth to investigate, where they were talking about handing out the tickets there. I responded by texting Josh. I am proud of how I kept my response reasonable and appropriate to the situation. This was when things got crazy.

So, it turns out that the different Random House reps were suggesting different places for people waiting for the David Mitchell signing to line up. But none of these were “official” lines. So eventually, someone had the job of putting all the lines together. That job belonged to Blue Shirt Guy, who you can see in the image below holding a large stick and attempting to guide the obsessive crowd. Blue Shirt Guy didn’t have an easy job trying to convince people to be reasonable in his quest to relocate the line somewhere sensible and safe. In the photo below, you can see him arguing with a young woman who repeatedly screamed, “HOW LONG HAVE YOU BEEN WAITING FOR DAVID MITCHELL?” and a gentleman who, at one point (after stomping on the same woman’s foot no less than three times) announced, “I AM SEVENTY YEARS OLD. I HAVE A HEART CONDITION. I CANNOT DO THIS.” and stormed off.

He was the first casualty of the David Mitchell Signing. But he wouldn’t be the last. Not pictured: the guy who exclaimed, “IF WE ALL AGREE ON A LINE, THEY’LL HAVE TO ACCEPT IT!” and tried to Occupy Wall Street us into some kind of collective David Mitchell storming experience. He was ignored.

This was around when Rachel’s cell phone cut out. You know how in an earthquake, there are so many requests for help that the cell phones can’t keep up? This was exactly like that.

At this point, we realized this was no ordinary author signing. We were lost. Blue Shirt Guy had no control over the crowd. At least two people had their eyes scratched out (metaphorically). There were rumours of lost limbs further back in the non-line, we had already lost the guy with the heart condition, and I was frankly getting quite thirsty. We experienced horror, confusion, fear, and selfies. Eventually, Blue Shirt Guy called in reinforcements. Blue Shirt Lady (there seems to be some kind of dress code at Random House). Blue Shirt Lady was uninterested in everyone’s bullshit about fairness and whose line was first and who had a heart condition and who was pregnant. She just wanted a damned line. And you know what? She got her damned line. (I fell in love with her a little bit that day.)

Blue Shirt Guy had done his best, though, and we told him so. He had survived. Not everyone would.

Soon the tickets were handed out. They were red, having been stained by the blood of those lost in the great line-combining battle of fifteen minutes prior, but we didn’t care. We had tickets. A ticket guarantees you a copy of the book and a signature. We were in. But as the line moved, it became increasingly clear that we would not be able to stay together. After the terror we had experienced, we knew not what it would mean to carry on our journey separately. The separation, at the Battle of Keeping the Aisle Clear, was emotional and wrought. Soon we were almost there. We could see David Mitchell. We could hear his soft British accent and sense his dapper gentlemanliness. Would anyone ever tell him of the casualties? The good men and women lost on this day? The people who needed snacks? We knew it would never be us. (What’s that, you ask? Why is my book signed to Peter? Oh yes. Well, that would be because I wasn’t actually in line for myself, friends. No, I was in line for one Peter Damien, fellow Rioter and non-BEA-attendee. Feel free to share accolades regarding my selflessness in the comments below.)

In the end, we survived. And we grew up that day. We learned a little bit about life, a little bit about love, a lot about crowd control, and way too much about how alarming the behaviour of excitable book people can be. But I know that I no longer think of Josh, Rachel, and Liberty as my fellow Book Riot contributors. I think of them as my compadres. The only people who have seen the hell I’ve seen.