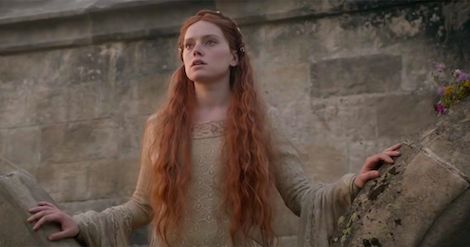 I’ve been a Hamlet fan since reading it for a high school class senior year, so I was incredibly excited when I saw a trailer for Ophelia on Tuesday, a retelling of the story from Ophelia’s point of view starring Daisy Ridley. It’s the kind of Hamlet adaptation not seen often on screen.

One of my big problems with Shakespeare’s plays is how women can be treated, a weird feeling since many of his plays have such strong female characters.

In his tragedies, however, all women are usually killed, including in Hamlet. Spoiler alert: Ophelia drowns in Act IV after descending into madness, and we only learn about it through Gertrude.

Ophelia only appears in five scenes (and is mentioned in a sixth when Gertrude announces her death). Ophelia’s father manipulates her along with Claudius, trying to prove Hamlet has gone crazy. When Ophelia does confront Hamlet, he rejects her and tells her to “get thee to a nunnery.” In a following scene, Hamlet tells her that a woman’s love is brief.

Ophelia’s character has been open to much interpretation, including why she goes mad, and there is more of her story to tell.

Based on Lisa Klein’s novel Ophelia, the movie promises to give us more of Ophelia’s story and answer the questions we have.

Here is the official synopsis:

Set in medieval Denmark and spoken in a modern tongue with a poetic twist, it recalibrates the classic Shakespearean tragedy of Hamlet so that its unspoken, complex heroine may share her own story. As a rebellious and motherless child, Ophelia (Daisy Ridley) is taken into Elsinore Castle by Queen Gerturde (Naomi Watts) as one of her most trusted ladies-in-waiting. Soon enough, Ophelia captures the affections of the young Prince Hamlet (George MacKay). A passionate romance kindles between the two in secret as the kingdom is on the brink of war amidst its own political intrigue and betrayal. When Hamlet’s father is murdered and the prince’s wits begin to unravel into an insatiable quest for vengeance, Ophelia sharply navigates the rules of power in Denmark all while struggling to choose between her true love and her own life.

Shakespeare, including Hamlet, is frequently adapted on film, some of which I have problems with. There’s Franco Zeffirelli’s Hamlet adaptation starring Mel Gibson, which makes me want to throw things at the screen because of the cutting. I’ve never been able to sit all the way through Kenneth Branagh’s uncut version with its four-hour running time (and you thought Endgame was long). Then there’s the adaptations that uses Hamlet as its source, including The Lion King and Rosencrantz & Guildenstern Are Dead.

None of those interpretations focus on the women of the play, though. A production focusing on Gertrude would be just as interesting as Ophelia’s story. Claire McCarthy’s film will give us that woman-forward focus, including expanding on Gertrude’s story.

It’s the sort of retelling that appeals to someone like me, who wanted more for Ophelia in Hamlet. There’s so much space for to tell the story of her love and grief.

Unfortunately, there’s already some bad news for those of us who want to see Ophelia in a starring role. Ophelia was featured at the Sundance Film Festival in 2018, and the reviews have been mixed. The movie has a Rotten Tomatoes score of 59.

One review calls Ophelia “fan fiction no one asked for,” saying the film completely changes the story and makes Ophelia a different character as a result. Another review calls the film a “disaster” and  says “this project is madness with no method to it.”

It’s disheartening, but Rotten Tomatoes also has a 100 percent audience score, based on over 800 users. Often audiences think differently than the reviewers, and Ophelia may be one of those movies.

Ophelia opens June 28, and you can watch the trailer below.