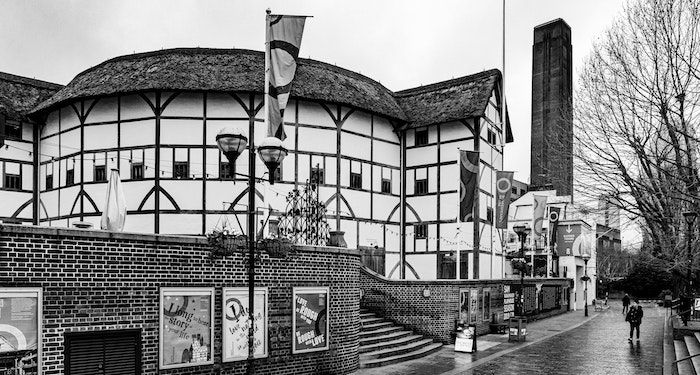 April 26, 2020 marks the 456th anniversary of William Shakespeare’s birth, and while that is certainly noteworthy, it is not the reason that Shakespeare has been all over social media in recent months. At least, it’s not the only reason. When schools shifted online, along with most of our daily social interaction, culture shifted online, too. Now, there are more ways to experience Shakespeare online than ever before.

This comes in especially handy for students who are continuing their studies from home. They can watch, listen, or even participate. The possibilities are endless.

Sir Patrick Stewart may be best known for playing Captain Jean-Luc Picard, but he was a trained Shakespearean actor long before he ever graced the bridge of the Starship Enterprise.  He began his career in the late 1960s with the Royal Shakespeare Company, spending more than 25 years as a member and continuing to play Shakespearean roles on stage and on screen throughout his career. Even Captain Picard was known to quote Shakespeare now and then.

It only makes sense, then, that when Stewart looked for some small way to bring comfort to people in these difficult times, he turned to the words of Shakespeare. Each day he posts a reading of a Shakespearean sonnet, generally in order, and, sometimes, gives a little history lesson or bit of commentary.

Sonnet 18. Perhaps the most well-known sonnet in the book. Speaking of the book, a little backstory on that too. #ASonnetADay pic.twitter.com/XjSDIntMos

Other people have joined the challenge or used it as inspiration for their own challenges, reading a poem a day by a certain poet or from a certain collection. Fitting, since April is National Poetry Month.

The Shakespeare Theater Company in Washington, DC, started the #ShakespeareChallenge in response to the theater’s recent closing because, as we all know, the show must go on! Here Artistic Director Simon Godwin explains the challenge and makes his own contribution.

Artistic Director Simon Godwin has issued a challenge—a Shakespeare Challenge! Record your performance of a favorite Shakespeare monologue and share it on social media with the hashtag #ShakespeareChallenge, then tag your friends and challenge them to brush up their Shakespeare. pic.twitter.com/3PZ7D88PZt

To date, they’ve received more than a 100 submissions from around the world, including performances in four different languages.  They’ve kept things going, offering a whole month of special programming, every Wednesday through May 13. The Shakespeare Hour is free to members and $10 for non-members.

Ian Doescher, author of William Shakespeare’s Star Wars, set a personal challenge to read the Folger’s Shakespeare Library editions of the plays and poems, which are available both in print and online. He invited anyone interesting in doing a little light Shakespearean reading to join in. He created a schedule of readings, and he has video introductions from Shakespearean scholars. Participants are reading Hamlet until April 28, and The Rape of Lucrece is up after that. Here’s the introduction to the Hamlet read-along from Ralph Alan Cohen of the American Shakespeare Center.

The Primary Shakespeare Company specializes in making Shakespeare accessible to students in primary school. To support families during quarantine, they are offering weekly standards-based learning resources, focusing on The Tempest. There are cross-curricular resources for each day of the week, including reading comprehension, math, science, dance, music, and games. Downton Abbey’s Hugh Bonneville is a part of the project, too.  Check out this video retelling of the play that kicks off week one:

The Globe has a ton of online resources, including an extensive video library of clips of performances, interviews, and behind-the-scenes footage. They also have an extensive video library of full performances. These are normally only available for rent or purchase, but they are currently offering select titles for free via YouTube. Titles are only available for a limited release. Next up is Romeo & Juliet, running April 20–May 3.

Give me my sin again…

Take a sneak peek at Ellie Kendrick as Juliet & Adetomiwa Edun as Romeo, as they meet for the first time at the Capulet ball, ahead of our free stream of #RomeoandJuliet 💔

Will you be joining us on YouTube tomorrow night at 7pm?https://t.co/lilxZ3pbjz pic.twitter.com/QhcaCKSAgD

There are lots of stories about how Shakespeare found himself quarantined during a plague or two, and that great works like King Lear are the result.  It’s too soon to tell if anyone is going to be quite that productive during the current crisis, but, if nothing else, everyone can spend a little extra time getting to know Shakespeare and his works online. That’s enough of an accomplishment.