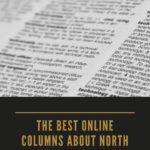 Little is nerdier than writing words about reading words about, well, words. With that tortured introduction out of the way, here are my favorite internet series, columns, and blogs about the English language (from American and Canadian perspectives). Embedded in each column are the personality and particular interests of the author.

If Social Justice is Your Bag: Chi Luu at JSTOR Daily

Computational linguist Luu is terrific at getting under the hood of everyday or overlooked language patterns. She links to academic research without being too wonk-ish. Have you ever wondered exactly why “Boaty McBoatface” is a funny name for a boat, or “Mister Splashy Pants” doesn’t seem like the most dignified name for a whale? Luu has broken down why. (And if you’ve never found yourself wondering about these, what on earth are you doing with your life?)

Luu also excels at making politicized language controversies accessible to laypeople. Her interests are incredibly broad though typically contemporary, from the tactics of Nigerian scam emails to the complex linguistics of consent. You get the sense, perusing her topics, that every social pattern has an interesting linguistics-related kernel waiting for someone like Luu to excavate it.

If Weirdness is Your Thing: Dan Nosowitz at Atlas Obscura

Journalist Nosowitz doesn’t focus on language, but does write entertainingly (and often humorously) about it. As befits the ever-charming site Atlas Obscura, which delights in hidden corners of history and society, Nosowitz is interested in quirky corners of language.

My favorite Nosowitzism is still his dive into the ubiquitous Vietnamese surname Nguyen and its many pronunciations. The exploration of why Canadians say “eh” is also charming.

If the Internet is Your Obsession: Gretchen McCulloch at WIRED

McCulloch is the bursting-with-enthusiasm linguist behind the appropriately named podcast Lingthusiasm, as well as the delightful recent book Because Internet: Understanding the New Rules of Language. And she has the unusual distinction of being WIRED’s resident linguist, where she focuses on technology and internet language.

McCulloch is concerned with language justice, for instance the unfair marginalization of certain languages, but treats these weighty topics with a light touch. An example is the unnecessary dominance of English as the basis of coding languages. Just one of the ways she’s changed my views on language is in her Lingthusiasm discussion of different conversational styles: high-consideration vs. high-involvement. I’d always considered high-involvement chatters (who frequently talk over each other) to be rude interrupters. But it may just be a distinct, and common, conversational culture that people are socialized into and has little to do with impoliteness.

If Transatlanticism is Your Jam: Lynne Murphy at Separated by a Common Language

This blog is the baby of Lynne Murphy, an American linguist living in the UK. She posts sporadically but with pleasing attention to detail about the intricacies of language differences between the two countries. In each post she provides alternate spellings of every ambiguous word, such as chil(l)i, proving that she has a better ear and eye for divergence than most people.

A good starting point is her Words of the Year series, where she chronicles generally under-the-radar terms that have crossed over from one side of the pond to the other. For instance, the most recent U.S.-to-UK word of the year is gotten (as opposed to got).

For more reading and listening about linguistics, try:

“Why I Stopped Italicising Non-English Languages”

“The Dream of a Universal Language”