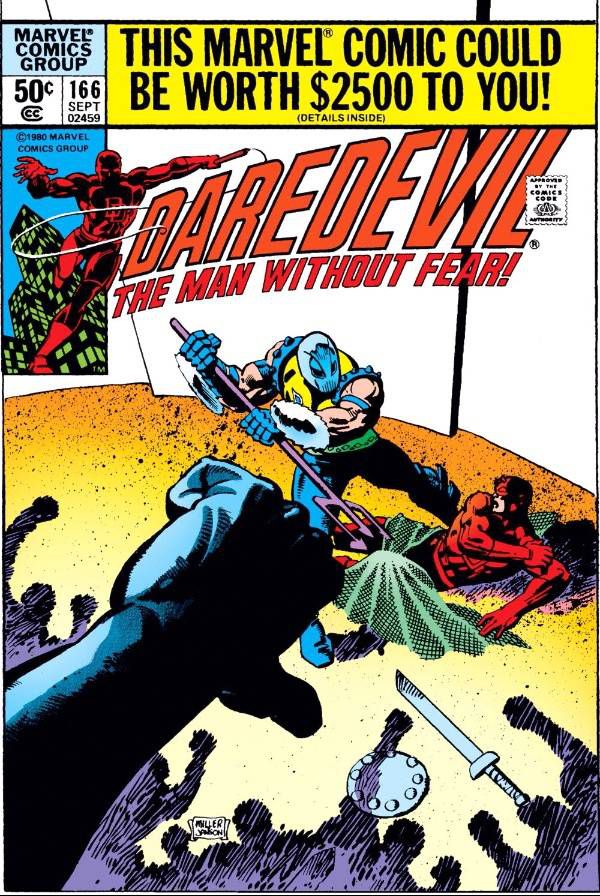 After the premiere date of the new Daredevil series was announced, I decided to make my Marvel Unlimited subscription count by reading some old Daredevil issues. I should preface this by saying that I tend to get a bit impatient when it comes to reading older issues. The writing tends to describe what the art is already depicting, and sometimes it can get a little silly. Of course, a lot of these comics were for children, and the medium was still pretty young compared to what it has morphed into today.

So I promised myself that I would go into this series with an open mind, and I was greeted by this gem: Daredevil #166 – Till Death Do Us Part.

Till Death Do Us Part was published in 1980, and was scripted by Roger McKenzie with Frank Miller as co-plotter, and penciler. In this particular issue, Matt Murdock’s best friend as well as fellow attorney, Foggy Nelson, gets married, and Daredevil goes up against the Gladiator.

Betsy Beatty, a social worker, is held hostage along with a group of children, and other patrons at the museum by Melvin Potter aka Gladiator. Gladiator declares his love for Betsy, and tells her that he knows she loves him too. Betsy, of course, shuts the Gladiator down and this causes him to think that her love must be earned in battle. That’s where Daredevil comes in.

You have the action that you would expect in a superhero comic but what I’ve come to love in this particular Daredevil run is the way the hero interacts with his villains. Betsy was Melvin’s social worker while he was on parole and as someone who was friendless, the support he obtained made him believe there was something more to it. There’s various moments in this issue where it’s clear that Melvin believes he’s a gladiator like when he thought he could hear spectators as he fought Daredevil. When Daredevil does eventually beat him, the issue doesn’t just end with the cops taking him away. It ends with Betsy wanting to help Melvin get better and Daredevil alluding to have his alter ego, Matt Murdock, represent Melvin as his attorney.

This is important because it makes the criminal justice system less punitive than we’re used to today and more about rehabilitation. It’s about punishing the crime and helping the individual to become a productive person in society. With those suffering with mental illness, the support is even more important to avoid re-offending.

This issue was my first step in becoming a Daredevil fan, and I hope to continue to be a fan as I read more about the character. Of course, the issue had its ridiculous, and hilarious moments. My favourite is when Foggy does a fraternity dance with his pal, Porkchop Peterson (yes, that’s his name).