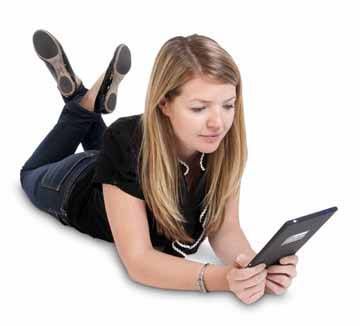 One time, my sister jokingly told me that she had only ever finished one book in her life: The Miraculous Journey of Edward Tulane by Kate DiCamillo. I suppose if you were 10 and only going to read one book in your life, there are worse books you could have chosen, but I’ll never forget how I felt like I had failed as a book-loving sister. I just couldn’t seem to convince my sister that books were the-best-thing-ever. Seeing as I spend most of my free time (and, now, my time at work) telling people which books they should read, this was a bruise to my ego. Even worse: my sister did become a reader, but I had nothing to do with it. Her Nook did.

You see, once the technology was put into her hands, and every book imaginable at her fingertips, she found what she liked. I’m sure you’ve guessed by now that it is not what I like. I was recommending book after book, but none of them would take because we have vastly different tastes in reading. Now that I know a little bit better what she likes, I think I do a better job at recommending. Even so, she discovers most of her favorite books on her own and reads them to her heart’s content on her Nook or her phone.

I’ve seen people claim that ereaders are a fad. I don’t think so. Maybe we won’t always have designated devices for reading, but digital books are here to stay, especially for people like my sister. Sure, I’ve fallen in love with ereaders and the ability to carry hundreds of books in my purse if I like, but I don’t need it. If you took my ereader away from me tomorrow, I’d survive. But my sister? She grew up with it. Since she was in elementary school, she’s been able to carry an entire library’s worth of books on her person.

Okay, you say, that’s just one kid, from a family of readers, no less! Sure, that’s true. Maybe my sister would have eventually been exposed to books she loved on her own, without the help of her ereader. I would argue, though, that she discovered her love for reading much more quickly with the help of her Nook. Now, I hope, it’s here to stay. I guess I’ll have to catch up on my contemporary YA romances.