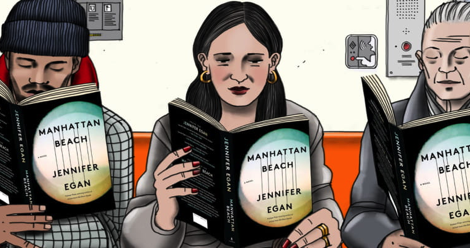 The winner of New York City’s second “One Book, One New York” campaign is here. Out of five books, New Yorkers voted to read Manhattan Beach by Jennifer Egan.

The first year of the all-city reading campaign was a resounding success. Barnes & Noble reported a 400% increase in sales in Americanah, and checkouts for the title doubled at the New York Public Library in just two short months.

This year, the Mayor’s Office for Media and Entertainment partnered with New York Magazine and Vulture to present five new titles for New Yorkers to vote on. They were:

While numbers for how many votes were received this year are not published, it’s no surprise that Manhattan Beach came out on top. Egan is a Brooklyn native as well as a Pulitzer Prize winner. Manhattan Beach is her fifth novel and her first work of historical fiction.

Part historical drama and part noir thriller, the novel is the story of Anna Kerrigan, who works as the first female diver at the Brooklyn Navy Yard during World War II. While repairing the ships that are instrumental to America’s victory, Anna also searches for her missing father with the help of a mysterious man somehow linked to his past.

For this year’s campaign, Scribner, a Simon & Schuster imprint, donated 1500 copies of the book to the 219 NYPL branch libraries. The Mayor’s Office has also released a Reading Guide for book clubs to work through together. If you’re a New York resident, check back on their page to see what events and activities will be offered throughout the summer in connection with the campaign.