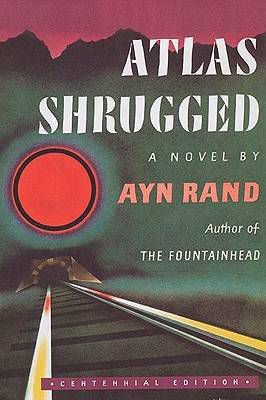 I’ve had my head in the sand for the last couple months, avoiding the inevitable slide into election season. But then last week I read Rachel’s awesome political reading list and I actually started to feel excited about politics again. Not elections, necessarily, but the process of being an engaged citizen.

Rachel’s post also reminded me of the political tome that has been hanging over my reading life since I was 14 years old – Ayn Rand’s Atlas Shrugged.

My flirtation with the book began in ninth grade. My civics teacher made us take a series of political quizzes to find out where we stood on the issues. In addition to a standard Democrat/Republican quiz, we also took a modified version of the World’s Smallest Political Quiz, a 10-question quiz that will place you in one of five parts of a political spectrum: Libertarian, Liberal (Left), Centrist, Conservative (Right) or Statist (aka Big Government).

On my first try, I scored all the way to the top of the chart Libertarian – a perfect score for “maximum liberty on both personal and economic matters.” I think if they’d asked any more questions I could have slid myself off the chart into Ron Paul territory, no problem.

The person most excited about this result was my uncle, a hardcore Libertarian himself. I think he must have been hoping to covert me to the cause, because that year for Christmas – instead of cash or a Best Buy gift certificate or other appropriate gift for a high school freshman – he gave me copies of both Atlas Shrugged and The Fountainhead.

Despite my early reputation as a fast and voracious reader, I have never been able to read Atlas Shrugged. The copy my uncle bought comes in at 1,200 pages. It weighs 3.2 pounds and is almost two inches thick. It’s really too heavy to carry around, although I distinctly remember a time – I can’t quite remember when – that I toted it around in my purse trying to read the damn thing. My best effort at the book was a period in college when I pledged to read a certain number of pages a day to finish it over a semester. I think I got about 400 pages in that time before I gave up all over again.

And yet, despite my inability to read the book (and, admittedly, waning interest in even trying), Atlas Shrugged has been in the boxes of books that I’ve moved every year (sometimes twice a year) since I was 18. It sits on my bookshelf, a bookmark stuck in from my last attempt at reading it, waiting until the day I finally take the plunge or toss it in my donation pile.

I remain at least a little optimistic I may, someday, tackle the tome. A different uncle gave me a copy of Infinite Jest as a high school graduation present, which I finally tackled three years ago. (No, I have no idea what the deal is with my extended family…). I have a vague idea that I may read Atlas Shrugged someday, I just don’t know when. For now, it retains the honor of the book hanging out on my To Be Read pile the longest.