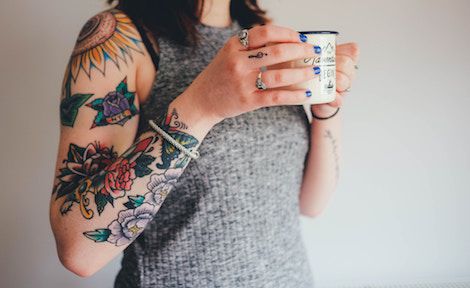 Tattooing has been part of the communicative culture of humanity for many thousands of years. According to the Smithsonian, tattoos have been with us since at least 3250 BCE, the dating suggested for two of the oldest mummies ever found. Ancient tattooing was most prevalent among the Austronesian people, who punctured skin using a small hammer and thorn, fish bone or shell. Tattooing was also documented among the Papuans and Melanesians, as well as the Ainu people of Japan, Berber women in North Africa, Native Americans in pre-Columbian America and the Picts of Iron-Age Britain. 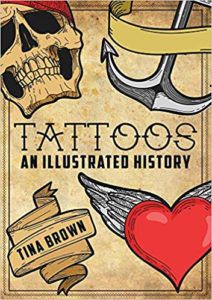 It’s commonly believed that the modern fascination with tattoos dates to James Cook’s voyages to the South Pacific in the 18th century, when the word ‘tattow’ was imported to western languages. Though tattoos weren’t unheard of at that time in the west, the first documented professional tattooist in Britain popped up for business in the mid 1890s, servicing, among others, royals who wanted their own art, according to Tina Brown in Tattoos: An Illustrated History. Some 50 years before, Martin Hildebrandt opened the first tattoo studio in New York City. Civil war soldiers were frequent visitors (both Union and Confederate) and Hildebrandt went between camps offering his tattoos to soldiers and sailors, to aid identification in the event they died in action. David McComb uses 100 Years of Tattoos to explain the emergent adoration for the form from 1914 to the present day, covering 100 years of war, fashion, art and resistance.

Of course, you can’t discuss tattoos without considering a series of crucial issues—the first being that people throughout history have been forcibly tattooed, whether on Auschwitz inmates during the Holocaust, or the tattoos imparted on slaves to mark them as chattel (a system that continues on livestock to this day). As far back as Ancient Rome, slaves and gladiators were tattooed on their faces, a practice that was only rescinded with the rule of Constantine, who banned the practice for religious reasons as Christianity took hold.

The second issue to take account of is the potential cultural appropriation of some tattoo applications, which is an ongoing conversation in a modern and globalised world. Celebrities with tattoos of traditional Native images and symbols have been criticised, and Maori patterns arguably are in safe hands only with those of appropriate descent. Symbolism is incredibly deep in this art form—in The Tattoo Dictionary, Trent Aitken-Smith extensively digs through the annals of human history to offer up a series of meanings for some of the most popular tattoos in the world- from sailor’s swallows and Mexican skills, he reveals the stories behind the images in a wider look at tattoo culture. Though not prescriptive, the book certainly made me check myself—some art just isn’t mine to appropriate. 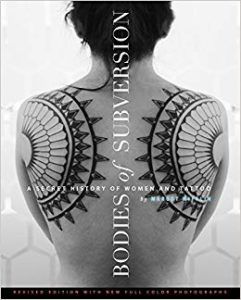 In Bodies of Subversion, Margot Mifflin presents a history of women’s tattoos, a subculture that dates back to the 19th century. The photographs here are absolutely stunning, and you can see the throbbing truth of bodily autonomy, independent thought and furious resistance in the ink etched on these women, especially in the suffragist ’20s and the feminist 1970s. Among other things, she discusses the use of tattoos on mastectomy scars and details the rise of both cosmetic surgery and tattooing with the growth of body anxieties. If you read nothing else on the topic, this book is the one to learn from, since tattoos are often seen as a construct devised by white men for white men, though the deeper history is much more diverse, more welcoming and endlessly more daring.

My father detests tattoos. In his mind, they are a vital part of the criminal classes, and in this his history is pretty good. When you give it thought, many infamous groups have long exercised autonomy through ink, from the Yakuza to La Stidda and prison tattoos. In Russian Criminal Tattoo Encyclopedia by Danzig Baldaev, photographs, drawings and text combine to tell the tale of thousands of tattoos documented by a Russian prison attendant over a lifetime.

Setting aside the puckered history and subcultural dominance of the tattooing world, there’s no denying the beauty of the art. High Voltage Tattoo by Kat Von D shows tattooing in its mainstream light and discusses the modern methods, pigments and collaborations that make up her studio operation. In The World Atlas of Tattoo, Anna Felicity Friedman tracks the globe to find the most incredible illustrations and shows both a little geographical history as well as depicting styles moving from indigenous to diaspora communities. 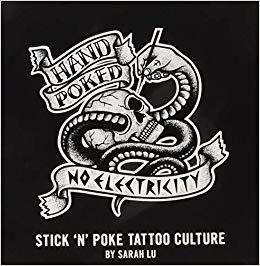 A recent trend for hand poked tattoos led to me check out Hand Poked No Electricity by Sarah Lu, a little resource that shows the history and the love in hand poking to create beauty. Or if you just fancy an inspirational wander down a lane of intricacy, check out Inked by Lola Mars, which packs a proper artistic punch on the coffee table.

Rioters, tell me about your ink! What it means, what it’s for, how you stumbled upon your fascination!