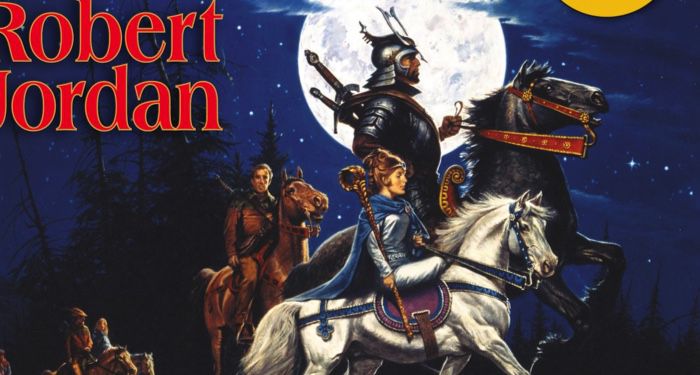 Robert Jordan’s Wheel of Time series has been with me for more than half my life. At 14, I spotted a tome of a book sitting on a friend’s bookshelf one day and she introduced me to The Eye of the World, telling me that she knew I would love it. I bought a second hand copy from my favourite used bookstore for about €3 and settled in for a long read, pushing my legs under my duvet as I arrived in the Two Rivers, abandoning homework and chores for this new world.

Jordan published The Eye of the World in 1990, five months before I was born. I read it for the first time 14 years later, while longterm fans were waiting for the 11th book to hit the shelves. And just a few years later in 2007, Robert Jordan passed away, the last of his books unpublished until Brandon Sanderson took over and completed the final three.

I read them day and night, swallowing the many thousands of pages in big gulps of adventure. When Rand Al-Thor learns he is the Dragon Reborn, destined to bring ruin to the world even as he saves it, he must go from farm boy to king almost instantly. I spent hours imagining myself in the White Tower at Tar Valon, falling in love with the characters and feeling their devastation as their world starts to crumble around them in advance of a long-foretold Armageddon.

While I read, I explored the internet to find out more. Whispers of films and TV shows were almost constant in those days, but I always wondered how anything could do justice to the world Jordan had built, immersive and huge as it was. This was before Game of Thrones hit screens with its furious battles and blood-letting, and before The Witcher brought Geralt to a wider audience. Back then the fantasy series committed to screen were boy wizards and Gandalf, and it seemed nobody was really invested in bringing 14 books (and a prologue novel) to life.

By the time Sanderson published The Gathering Storm (book 12), I had caught up, and read the last three books in the days immediately after they were published. I hadn’t been that enthusiastic about new releases in years. When A Memory of Light came out in 2013, I was sad to say goodbye to the characters I had spent almost a decade with, but I also loved the finish, the end of the story finally known after so much waiting. I was 23 when the series ended.

And then I left behind Nynaeve and Moiraine, Rand, Mat, Perrin and Egwene. I left them in their world and spent some years doing my own growing up. I never read Jordan’s Conan the Barbarian novels, nor any of his other work either. When The Wheel of Time Companion was released in 2015, I picked up a copy but never dived into it properly. I suppose I felt the past belonged in the past.

I was scrolling through Facebook one day and saw an update from a Wheel of Time page I had followed for years but largely forgotten about. The update said Sony would be producing a TV series. I scrolled on. I had heard announcements like that before. But perhaps the advent of lengthy fantasy television had made all things seem possible. Amazon joined the production and ordered the series. It started filming in 2019, and over the past weeks and months casting announcements and a slow drip-drip of information have been spiking in my feeds. In the middle of the pandemic lockdown, a tiny, short trailer showing a slice of Emond’s Field was released and I felt a familiar, nostalgic joy in my belly. This was real.

I made one of my best friends through The Wheel of Time. We were teenagers at the time, both visiting a mutual friend in hospital. We started talking about books as she napped and discovered our mutual love. He sent me a message about eight months ago, locked down and separated from me across London. He told me he’d started reading the Wheel of Time again. I didn’t know why he was doing it, but a few months later I got the same urge. For the first time in a long time, I picked up a copy of the prologue novel New Spring, and started to read.

I’m six books into my reread now, a quick pace in just a few short months, faster than I read them as a child. There are things I still adore, and there are things which now cause me some challenges. Jordan often sizes his male and female characters up against each other, with both sides insisting the other are hopeless. His female characters and their clothing choices are subject to lengthy paragraphs of consideration. Nynaeve pulls her braid so often that I wonder if her head wouldn’t ache.

But the pull of the world remains, the women with huge magical power, seen as equal or stronger than the men they work alongside, the men conscious of their choices and their impacts on others. There are over a dozen countries featured with their own histories and cultures. Jordan’s world was diverse and multicultural and I still love reading it.

For the fans who had envisioned their own versions of the world, the casting announcements have sometimes proved controversial—such and such is too old or too young. That’s not how they’re described in the book. Why isn’t he taller? Actors of colour have been cast in many of the biggest roles on offer, which has led to plenty of eye-wateringly tiresome racism.

But for me, it feels like my oldest friends are coming to visit, and I can’t wait. I’ve slowed my reading pace so I can enjoy my re-read for longer. The first time around, it went by all too quickly.