Personally, I couldn’t care less about the content of a book if its book cover art is lifeless and humdrum. At least that has been my thought  process on books the last couple of years. Maybe it’s my age or maybe it’s my Tourette Syndrome that causes me to look at things differently.

I used to constantly read book reviews from Publisher’s Weekly, Kirkus Reviews, and Amazon and only be concerned with the content and validity of a book. I based my personal book purchases off of reviews and I helped build library collections at work solely based off of book reviews. This was logical and professional in many ways, but then I started thinking: If I’m a library patron or a potential book buyer, wouldn’t I be more likely to be drawn toward a book whose book cover just spoke to me? Many library patrons I have spoken to over the years have confirmed my suspicions. When books are displayed in such a unique way (think book displays) and their book cover art is visually appealing, they are more likely to at least pick up the book to read what it is about. When a book has a bland, monotonous book cover, they will more often than not pass it up.

When I hear people say “Don’t judge a book by its cover,” I think about how this saying used to ring true. These days, however, that is not the case. There is a reason book cover art has become much better over the years. The book industry has drastically changed and “the reality of the book industry is that the vast majority of readers do indeed use the cover of a book as a deciding factor in not only whether or not they should buy the book, but if they will enjoy it as well.” Think about it, there are literally millions of books out there in the world competing to be purchased or checked out. It makes sense to have a book cover that is awesome. It provides people with a quick glance of what the book is about. In an article published by The Guardian, the importance of judging a book by its cover is highlighted: “The ‘at a glance’ bit is crucial because each title has 100,000 competitors on the shelves around it vying for the reader’s attention. A glance is often all you get.” If a glance is all you get then the book cover better be top-of-the-line. It is important to note that a book cover’s art should not be misleading. The cover should at least tell a potential reader a little bit about what the book is about.

Here are some examples of book covers I feel are visually appealing: 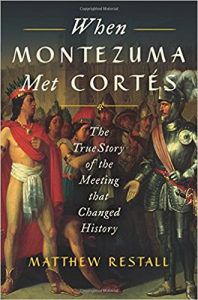 The book cover on this one is appealing because it places Montezuma and Cortes in such a way that it appears they are about to have a duel. It’s an “Us versus Them” book cover. If you know anything about Cortes and his fellow conquistadors, you know they conquered the Aztecs in 1521. This cover image is relevant. 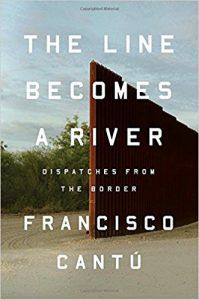 The Line Becomes a River: Dispatches From the Border by Francisco Cantu

This book cover was visually appealing to me on a personal level. Having grown up in a border town, the image of the border wall on this book cover told me what I needed to know about picking this book up. Little do many know that a border wall already exists. I have seen it many times in person and it sickens me every single time I look at it. The cover is also not misleading because the book is exactly about the border as told by Francisco Cantu, a former U.S. Border Patrol Agent. 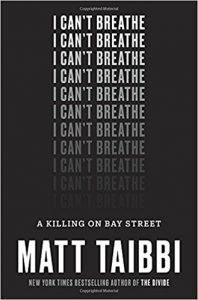 I Can’t Breathe: A Killing on Bay Street by Matt Taibbi

This book cover is not the most visually appealing but the message it conveys makes it all the more appealing. The words “I Can’t Breathe” can be seen on the book cover. You will notice the words begin to fade until they are almost not visible anymore. This symbolizes Eric Garner’s breath as his life was taken from him on that fateful day in 2014. That is all that needs to be said about this amazing book cover.

I am sure you have noticed many book covers that are genuinely boring, bland and misleading. It just happens sometimes. But you have also noticed books whose book covers are truly amazing. They draw you in and leave you wanting more. It should also be noted that an amazing book cover does not necessarily mean an amazing read. Some books are just not very good. Which book covers have you seen that were the most visually appealing?