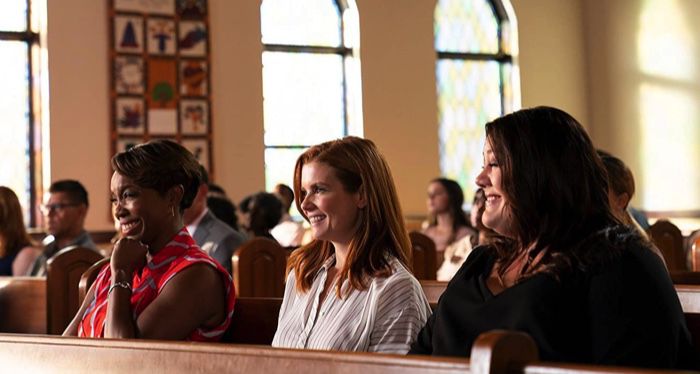 I recently joked on Twitter that we should just start sending romance novels by queer authors and writers of color to Ryan Murphy (creator of Glee, Pose, and Hollywood), because Netflix would basically give him anything.

But maybe it wasn’t a joke.

On May 19, Sweet Magnolias premiered on Netflix. The first season is a delightful introduction to the town of Serenity and the three friends at the story’s center: Maddie, an almost-divorced mother of three; Dana Sue, the owner and head chef of the best restaurant in town; and Helen, who seems to be everyone’s lawyer for everything. The three have been friends for a long time, and have decided to go in together on a new venture. They also have to deal with their own personal issues, which can either be exacerbated or improved by the help of those around them.

Sweet Magnolias is based on a series of the same name by romance author Sherryl Woods, who is the prolific author of well over 100 romances. I haven’t read the series, but from reading the descriptions of the first five books it seems the Netflix series has done more than just diversify the cast. They’ve made some of the storylines more contemporary, including making one of the leads an actual fat woman who isn’t ashamed of her size. (At least not yet; but the series might be ongoing.)

There’s another series adapted from romance that premiered on Netflix last year; you might have heard of it. Virgin River tells the story of a woman looking to start a new life as a nurse practitioner in a small town that has a lot of secrets. The show is adapted from a series by Robyn Carr, a similarly prolific author. (Just as a side-note, since we’ve now got the beginning and end of the alphabet, I wouldn’t be surprised if some Debbie Macomber series was next.)

As actual stories, these two don’t have much in common beyond their small-town setting. But as properties, they have similar elements:

This may not mean a lot, but they’re pretty devastating points for a queer reader of color who would love to see some of her favorite properties by authors of color and queer authors adapted for the small screen. It’s particularly interesting when you look at the original material that Netflix has acquired over the past few years, or even the YA properties. Original romcoms like Always Be My Maybe, which was written and produced by Asian Americans and the talk of Twitter throughout its release weekend. The movie adaptation of YA favorite To All The Boys I’ve Loved Before and its sequel were hugely successful. And yet we can’t even get a 90-minute adaptation of a contemporary adult romance. There are so many romances that were practically written for the screen, and Netflix could be churning out five or six a year if they played their cards right.

Rafe and Xeni would be so easy to film, location-wise. And I would watch them on repeat.

I’ve written before about series that it would be just as easy for Netflix to adapt, with low overhead requirements. Something like Alisha Rai’s Forbidden Hearts series, which is set in a town the size of Serenity. There might only be three books, but limited series are great for Netflix.

Or could you imagine something based on all of the connected Christina C. Jones series?

The Dance Off series.

And if we’re talking small towns with personalities, the town of Henry Adams, in Beverly Jenkins’s Blessings series, is the obvious next choice. It has all the same elements of the other two series, without the need to be creative with casting.

There’s obviously a bigger discussion about what and whose stories get adapted for any kind of film, whether it’s for streaming or cinematic release. We know that it’s not because there aren’t books worthy of adaptation, and we know it’s not because authors don’t want their movies made. It’s about what doors we are actually being brought through, and who is advocating for us.

Romance has two advocates within the film industry at the moment: Bea and Leah Koch from The Ripped Bodice, who have a partnership with Sony; and Frolic Media, who just signed a partnership with CBS. The latter have made some missteps on their site, but cover a diverse enough amount of content that I would hope they will be advocating for works by marginalized people. Bea and Leah have already shown with their work onsite at The Ripped Bodice and projects like their Diversity Report and the Ripped Bodice Awards for Excellence in Romantic Fiction that they are willing to do the work and use their privilege for the good of others. And we can only hope that after having proven herself with Bridgerton, Shonda Rhimes will give us something reminiscent of Thursday Nights…just with more functional romantic relationships. With major production companies and budgets working to help authors of color tell their stories on film, we could have stories told with the same care and quality as original stories currently told by Netflix.

Imagine what Deadly Sexy could have been if the creators hadn’t had to fundraise on Indiegogo.

And obviously, we have more to see when it comes to Netflix and Romance. Shonda Rhimes’s Bridgerton series is going to be pretty amazing, even though the same issue with casting—colorbending a very very white series by a white author—isn’t helping anyone out in the long run. And Lyssa Kay Adams’s Bromance series has been optioned for…something. (I don’t know if it’s a series or feature-length projects.) Which is quite impressive considering she’s only going two books out in an ongoing series. The Bromance Book Club will lend itself well to the screen, that’s a given.

But if they make Thea a redhead, I will riot.