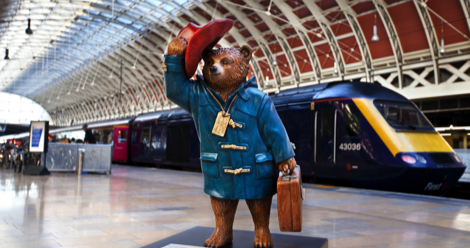 When I first became an immigrant in the United Kingdom, my mom bought me a Paddington bear at the Paddington train station in London as a keepsake, to remind me of my family. Thinking back, it was done spontaneously, but it was extremely suitable: Paddington is a Peruvian bear, a Latin American bear–and I am Brazilian-Colombian, also Latin American, and I was moving to the UK for the first time. I kept that bear near me for quite a few years, but have unfortunately misplaced it and don’t know where it is right now. Still, I still think of Paddington bear fondly, as a symbol of people who are pro-immigration, as a metaphor for helping refugees and immigrants who have left everything behind and are looking for something new in a truly messed up and cruel world.

Because of this personal connection I have to Paddington as a character, I was saddened to hear that his creator passed away this week. Michael Bond was forthright about who Paddington is in a 2014 interview to The Guardian. As the Paddington motion picture was debuted in cinemas, Bond explained what inspired the character in the first place: the evacuee children he saw pass through Reading station from London. He said: “They all had a label round their neck with their name and address on and a little case or package containing all their treasured possessions. So Paddington, in a sense, was a refugee, and I do think that there’s no sadder sight than refugees.”

With this context, it’s important to think about what Paddington’s story teaches us about refugees and immigrants. Let’s recap the wonderful story: Mrs Brown runs into a nameless bear in Paddington train station in London. The bear is alone, the narrator even refers to the bear as “it”. This is an indication of difference: the bear is only assigned personhood when it speaks English and when the people can understand him. If we read the bear as an immigrant or refugee, we can see him as a metaphor for how natives of a country might experience an outsider. A bear: someone this British couple doesn’t recognize as common to their eyes, someone who is new to the country, someone who stands out. And the bear is by himself, obviously out of place–but nobody but Mrs Brown notices him for long enough to ask if he needs help, or a place to stay. Why does humanity, save for a few of us, turn away from those who are in need? Why do people walk past the bear without asking if he is okay? Why does Mr Brown show resistance when Mrs Brown quickly decides to adopt this bear in need? This bear is fictional and he is, after all, of a different species, but the fear of the Other and the reluctance to help the Other is very much real–especially in today’s society.

As a newcomer to this new city and country, the bear struggles with self-identity. He cannot tell his new parents his name, for it is in Peruvian and no one will understand it. This is interesting: non-anglophone names often get branded as weird and unpronounceable and Bond was certainly British and white, so it makes sense that he would write it like this. However oblivious to how problematic this is Bond was, this is essentially how the bear became Paddington: he was given the name of the station he was found in. Bond was, of course, well-intentioned, but immigrants and people of color with non-English sounding names get asked to change their names into something more palatable and pronounceable all the time. While Mrs Brown welcomes Paddington to the UK, it is a type of conditional welcome, one that demands assimilation and compliance. But Paddington can’t really choose much else, even if he didn’t want to, he has to accept the help he is given.

This is often how immigrants feel in countries where their humanity is conditional, depending on how economically anxious the citizens are that year. As an immigrant in the UK for example, I have even struggled in left-wing spaces even though I long to be politically active because it always seems like I exist in a grey political area. My status and the legitimacy of it can be negotiated at any time, depending on whether the electorate is being openly racist or not.

Immigrants also feel pressure to assimilate like Paddington did, even if it’s not always as overt. In a subsequent scene, Paddington causes a ruckus by ravenously eating cake on a table at a buffet. Of course he does, since he’s a bear and he doesn’t know how to use cutlery, but this could certainly be read as a dramatic clash between cultures. Immigrants are often asked to subscribe to etiquette and customs they are not fully aware of, sometimes coming across as rude if they fail to assimilate or to submit to rules they don’t know.

Despite these messages, I do believe Bond meant his book as a largely pro-immigration, pro-refugee story. While Paddington’s differences can be read as demands for assimilation, it’s also obvious that the Brown family attempts to accommodate his needs and differences throughout the book. With the current political climate, many people may see his death as symbolic, especially when we remember that the Paddington motion picture premiered during pre-Brexit Britain, when hostility towards migrants was at an all time high. However we read Bond’s death in a grim climate for immigrants and refugees alike, it’s important to remember the ultimate message he wanted to instill onto British society: that Paddington is not only welcomed to the UK by Mrs Brown, he is also welcomed to her family and her home. As we move forward, perhaps Paddington can be a reminder of how hard life can be for the Other and how citizens of a country could make it better by trying to understand and welcome those differences.