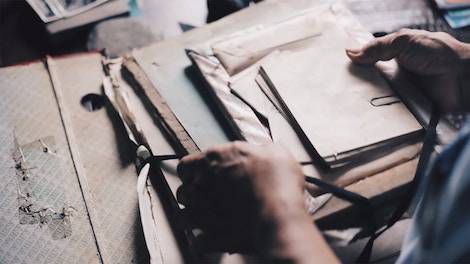 I’m currently elbow-deep in a relationship with a photographer who, during her life, never shared her work with a single soul. Vivian Maier was a Chicago woman whose street images were discovered by accident at an auction after she died. The person who found them, John Maloof, had originally purchased them with the hopes of finding some inspiration for a project he was working on. But he saw something else in the photos, an extraordinary talent on par with the likes of Ansel Adams, and Maloof changed the course of his work to figuring out who, exactly, Vivian Maier was.

The story of her work and the discovery of her work — as well as, obviously, plenty of her incredible photographs — are highlighted in the film Finding Vivian Maier, available for streaming on Netflix, as well as in the book Vivian Maier: Street Photographer edited by Maloof.

I learned of Maier through a photography class I was taking last year. Her name came up as someone who was a master of the self portrait in a time before we held boring debates about selfie culture and narcissism. Maier took rolls and rolls of self-portraits with her camera. They were exceptionally creative works: as seen in the piece of street art above by Chicago artist Kobra, Maier used reflective surfaces around her to capture herself and the world around her. The art here is a rendering of one of her most well-recognized photographs, which she took of herself in a store window, capturing the busy street behind her.

The same day I took the train down to Chicago to see this piece of art was the same day that I found myself wandering a tiny permanent exhibit of her work at the Chicago History Museum. The exhibit is so small and tucked away, that I was able to spend nearly an hour in there by myself, looking at image after image of people, of Chicago street scenes, of the suburbs I knew from my own childhood in the area. Maier loved to capture tragedy in her images, and perusing some of the shots she took in the aftermath of a local tornado put me right back into my own childhood, remembering where I was during one of the biggest, most destructive tornadoes in local history (it happened to be the day my mom and I moved from our house and into my grandparent’s home, signaling the finality of her separation from her husband).

My walk with Maier on that day happened while in a parallel universe on the internet, news broke of a found manuscript by Maurice Sendak. My immediate reaction — as is always my reaction with found manuscripts — was frustration.

It is always awful when we lose people whose work we love, but there’s something kind of weird about unpolished work coming to light. In some ways, these discoveries can feel like a crass way to make money off a legacy. But that aside, speaking from the perspective of a writer myself, I always have a moment of being taken aback by the idea of having no say in the future of a piece of work not yet known by those who are part of my career.

I’ve spent many years telling people that when I die, I want my personal artifacts burned. I studied archival work, thinking that my career might take me into archives, so in the back of my mind, the possibility of having things I would prefer not to be seen after I die lingers. It’s less about the discovery of something unsavory and more about the fact I have no say in how or where that work might be used. That work loses a context to it.

I never wanted people to see my garbage work, and for years, I’ve projected those feelings onto the works of other creators. Would Dr Seuss be happy a new book of his emerged from piles on his desk? Would Maurice Sendak want his newly discovered title published without any editorial input or any sort of normal process whereby his other works were shared? And at what point do we begin trying to publish letters and journals, correspondence and other personal effects? If you’re not around to make a declaration and haven’t delineated how you’d like your work to carry on after you, it feels like a thin line to stand upon.

Is it or is it not authorial intent when something hasn’t been shared? In the case of posthumous work discovered years, perhaps decades, perhaps centuries, is there a statute of limitation?

But then, I think of Vivian.

During her life, Vivian didn’t share her work at all. People knew she took photos, and people knew she was “kind of weird.” She was a pack rat, perhaps even at the level of hoarder, and though I’m not a medical expert, from what I’ve read about her and heard, it’s hard to imagine she wasn’t struggling with some kind of mental illness. Vivian, who worked as a nanny, would take her charges with her to take photos, dragging them along with her on the subway to visit places like Chicago’s stockyards. She’d spend hours upon hours taking street shots. Because of her camera preference, she was able to get close to people and capture them exactly as they were in the moment, without their suspicions about being photographed ever being raised.

There were people who came into the Maier exhibit while I took a rest on one of the exhibit sitting benches. It was a group of younger children with a teacher. The teacher asked the kids to pick a photo with a friend and to tell a story about it in three sentences. I sat and listened, and I loved overhearing one of the kids saying she didn’t see the person who was in one of the photos and the adult pointing out the shadow behind him. The child’s face lit up.

Sitting there with those photos, something shifted in me. I was — and I am — part of what I always rejected. My mind couldn’t get enough of this photographer and couldn’t wrap itself around the entire legacy of her life. She had incredible talent and sharp eye, and, as a lot of her photos suggested, a great sense of humor. She knew how to look at herself and how to position where to put herself in the frame. Vivian was here, but so were these buildings, so was this scene, so were these other people. She was in front of, as much as behind, the lens. The person telling the story as well as the person who was as much a part of the story.

She died, of course, so I’ll never know.

Perhaps Vivian meant for her work to be found in the future. Perhaps — and this is a theory floated in the film — she couldn’t find someone who could print her pieces the way she preferred and couldn’t afford the print maker in France she knew as a child. Perhaps, as sometimes happens, she became so caught up in the making of art, in the making of a life that thrived on capturing things as she saw them, that it never struck her to take the time to do something with those shots.

Vivian, if the stories told about her can make up even a fraction of who she was, was complex, challenging, difficult, and lonely. And it’s possible that, while she didn’t plan to share her work with others during her life, she left it for the purpose of her life taking on another one upon her death. Her camera, maybe, was her constant companion, and the tool through which she takes on a story she doesn’t get to control, despite being the one behind it.

And maybe that’s it entirely.

There might be something uncomfortable or itchy about a found piece of work from a beloved (or even unknown, but exquisitely talented) writer that emerges after they pass. But, whatever the value is, it no longer belongs to the creator. It belongs, instead, to the consumer. To those who find the work, who choose to do something with it, and those who choose to pick it up. They ascribe the value and the story. It’s possible the work wasn’t meant to be seen or shared. But it’s also possible that work was meant to be shared. That it was a part of a whole of a story of a person, whose life gets to play out in ways that they could never imagine when they were still alive.

The value of that work no longer belongs to the creator. Instead, it’s made through the hands and eyes and ears of those enjoying it.

Top photo is credited to me, the rest are Vivian Maier’s.