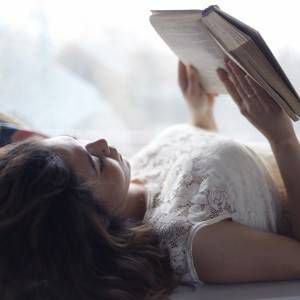 This is a guest post from Claire Handscombe. Claire moved from Europe to DC in 2012, ostensibly to study for an MFA in Creative Writing but really – let’s be honest – because of a West Wing obsession. She loves books almost as much, though, and hopes to see her novel on the shelves in the not-too-distant future. Follow her on Twitter @clairelyman.

On a recent visit to Strand Books, down in the memoir section where I was looking for Arthur Miller’s Timebends, something caught my eye: a book I have owned and loved and recommended for years. 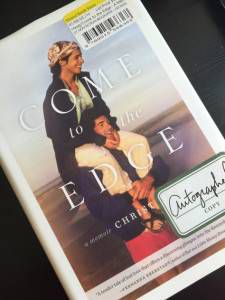 There were three physical copies of Christina Haag’s Come to the Edge in our apartment already. My own is personally signed to me by its author; I bought one for my flatmate’s last birthday; the third is because on my first attempt at buying this present, I was sent one with a minor coffee stain on the pages. My flatmate might not have minded: she’s a dog-earer; that’s how she expresses her love of books. It is not, however, how I express mine. And this book deserves better than that. I got her a new one, but kept the old one for – well, I’m not sure what for, exactly.

You would think, given all of this, that I would not need to buy this book staring across at me from the Strand shelves, even if it was the hardback, which is trickier to get hold of these days and the only version I buy for other people, because, to me at least, its cover is a much better reflection of the tone of the book. But I pulled it out anyway, with vague intentions of surreptitiously going to put it, gorgeous cover up, on the table for “New York Authors!”, increasing its odds of being discovered. When I pulled it out, though, I saw that it was signed by the author. And in pristine condition. And impossible to just leave on the table for someone else to find. Because, what if they didn’t appreciate it as much as I do? As much as it deserves to be? Also because, when I posted this dilemma on Twitter, one of my followers responded: “Rescue the book you love, for as Kenny Loggins says, if you find she helps your mind, better take her home.”

The first time I bought Come to the Edge was in 2011. And you know how, sometimes, you are swept off your feet when you least expect it? This book was like that. Christina Haag writes so beautifully, so elegantly; she makes New York City in particular come alive. And if you’re a romantic like me, your heart will soar and then break along with hers as she meets and gets to know and falls in love with and is separated from John Kennedy. I was up till 2 am reading, some nights; I was away from even Twitter for vast chunks of time.

And then I bumped into the author online and she was just as lovely there as she had seemed in her memoir. I am incredibly loyal to books I love; I am incredibly loyal to people whom I admire, and even more so when they are undeservedly gracious and kind to me. When these two things come together, chances are I will never stop talking about the book in question. True to form, it’s been almost four years, and I still haven’t.

In those four years, I’ve moved from Europe to the US and completed an MFA in Creative Writing. When I moved, I brought the books I couldn’t bear to leave behind. Earlier this year, I finally got to meet Christina Haag and have her sign my already-treasured copy of Come to the Edge. (She is lovely in person, too.) In those four years, I’ve recommended this book countless times. My mum has read it. My closest friend back home in London has read it too, pausing to email me a few words from it at one point with the subject title “Great sentence.” Later, she proudly showed me how well she had taken care of the book, how flawless she had kept it. In my book-love language, this equates to profound respect, and she knew that.

I don’t buy Come to the Edge for just anyone. I buy it for people who love good literature and who understand the importance of this memoir to me and its influence on my own writing. I don’t know yet who this Strand-bought, autographed copy is for. I do know, though, that it will be someone who loves books, and someone who loves me, and someone who will understand that in giving them Come to the Edge I am giving them a tiny piece of my soul.