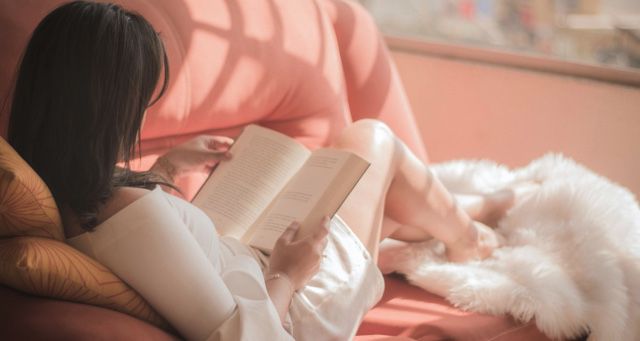 I love people’s stories of becoming a romance reader. Sometimes the stories are brief, because books can pass like beloved heirlooms. Other times the tales have the air of a fantasy adventure, of stepping through a portal to discover magic and wonder despite other people’s disbelief. Rather than hoarding gems like dragons, romance readers tend to invite others through the portal. They risk the ridicule that can come with believing in magic or loving a derided genre. My story isn’t necessarily the most epic. Still, I hope there’s a detail in it that may entice another intrepid soul to embark on their romance journey.

I grew up in a house full of books, but my mom was an “I’ll read anything except romance” kind of reader. You know the type; they’re the literary version of music lovers who listen to “everything but rap and country.”  Looking back, I can see she was depriving herself; internalized misogyny isn’t easy to dismantle. She adored books I now recognize as romance-adjacent, in that they trafficked in relationships and included sex on the page. She was an avid reader of the Clan of the Cave Bear novels and John Jakes’s Kent Family Chronicles. Nowadays she enjoys Philippa Gregory’s books about Tudor England and Diana Gabaldon’s Outlander series, which likewise have crossover appeal between romance readers and historical fiction readers.

That “we don’t read romance in this house” message became internalized, as often happens with refrains heard in childhood. The mix of horror, sci-fi, mystery, and other genres on my living room bookshelves mirrored the way many bookstores, and indeed greater society, treat genre fiction. Books that adhere to genre conventions can be great, unless it’s romance. Romance is poorly written, formulaic drivel for sad, lonely women to read. Let them find that somewhere else.

I see in hindsight that I, like my mom, was romance-curious. One of my favorite parts of the Little House on the Prairie series I read and reread as a child (and would caution contemporary readers against due to its virulent racism) was Almonzo’s courtship of Laura. The details: so sparse! The feelings: barely expressed! Yet the scenes of Laura being ferried by her beau on a sleigh between home and work, cozied in blankets against the bitter cold, were the most dreamy passages I’d read to date. I had the same instinct the more I read, to spin out barely-there intimations at love and romance into deeply-felt, passionate prose.

Out of Context Quivering

Middle school sleepovers were where I finally noticed romance novels in other people’s homes, sometimes stacked several deep on groaning shelves, as is their wont. My friends and I scoured the books for the steamy stuff, performed dramatic readings rife with quivering flesh and yearning mounds, and giggled ourselves to delirium. Had I been less obedient, I might have read one of these naughty books cover to cover. Alas.

This obedience intersected with my religious upbringing. The deep shame around sex kept me from reading about it, learning about it, or considering my relationship to it at all. The broader anti-romance stance is undoubtedly part of a larger system that keeps people from being themselves, which is the real shame. I would never say that romance novels are the best place to learn about sex, but they have served as a positive influence on plenty of readers.

In high school, I became a devoted reader of Maeve Binchy, whose sprawling, soapy novels about Ireland were, I can see, also romance-adjacent. They didn’t quite hit the mark given they rarely ended with an optimistic outlook for couples who held the spotlight in her intertwining storylines. I picked those up because a cool girl in my music class talked about them and I wanted to be in on the conversation. The takeaway there is to talk about the books you like; you never know who’s listening.

Feel free to call me a boomer (I’m actually on that weird Gen X/Millennial cusp) while I express some nostalgia for the serendipity that happened in the days before on-demand everything. While sleeping over at a friend’s, I woke up first, which always happened and yet I never prepared for. Needing to entertain myself in a house without cable television or internet, I picked up a book I found lying around. It was Jewels of the Sun by Nora Roberts.

I didn’t know at the time that Nora was a common gateway to becoming a romance reader. The book didn’t have a clinch cover showing breathless and semi-naked desire. That meant I could bring it into my own house without risking scorn. Moreover, the back matter made it sound akin to one of my beloved Maeve Binchy books. I borrowed it, raced through it, and bought the rest of the trilogy as it came out. Honestly, they were not the books of my heart, but I read all three happy endings with great relish.

Following Nora’s Gallaghers of Ardmore trilogy, I unfortunately fell into a non-romance lull. I read mostly literary fiction and was unbearably snobby about it. Was I an insufferable dingaling who also only wanted to watch indie movies and listen to indie music? I’ll give you one guess. College can have this effect on the highbrow-lowbrow pendulum. The good news is that recovery is possible.

Despite my resistance, my romantic streak never diminished. Romantic literary fiction like A.S. Byatt’s Possession and Haruki Murakami’s Norwegian Wood were the kind of books I was consistently drawn to. I could have continued in that direction, becoming like my mother and denying myself the thing I clearly wanted. Instead, I began to listen to the brave, cool people in my sphere who were open about reading romance. And thankfully, I had mostly worked through the hangups that made me so uncomfortable with sex and sexuality.

The romance portal deemed me, flawed but ready, worthy to pass through a second time. This gracious invitation led to reading Romancing the Duke by Tessa Dare. I discovered magic again. I could see the full scope of what romance offered: rich characters, humor, satisfying plots, and hope. The reductive view I had of romance was shed utterly in favor of something like radicalization. That hope and love are engines that can make lives immeasurably better. I was finally becoming a romance reader.

Now I talk to my friends about romances I adore, in case anyone harbors trepidations or curiosities as I did. I’m thankful to the people who pushed me toward Maeve Binchy and Tessa Dare. I now aspire to inhabit that role myself. My favorite is personalized romance recommendations, though I have universal ones as well, like Indigo by Beverly Jenkins and American Dreamer by Adriana Herrera. And if you’re looking for sports romances, queer romances, or Hogwarts house pairings, we’ve got you covered with plenty of recommendations.

For more about romance journeys, I can recommend the current season of the Fated Mates podcast. The hosts are going deep on the formative romances of their lives. If you’re hearing the call to adventure, I urge you to heed it faster than I did. If you’re well on your journey, let me know what you’re reading! Our magic strengthens as we share it.