We’ve seen a fair number of copyright controversies in the last year or so. First up in May 2018 there was the ‘Cockygate’ controversy, where author Faleena Hopkins learnt that trying to copyright the word ‘cocky’ in romance titles is a losing battle. Then in February 2019 we had the ‘Copy Paste Cris’ scandal, where it turned out that someone had been plagiarising a lot of prominent figures in the romance novel community. But there’s one more controversy which people have paid comparatively little attention to (though Courtney Milan did comment at one point), and that’s the saga of the Omegaverse lawsuit.

What exactly is Omegaverse?

Basically, it’s a sub-genre of erotica revolving around a specific kink. Humans come in three ‘dynamics’: Alpha, Beta, and Omega. These dynamics have different physical markers taken from animal behaviour. This mainly boils down to the fact that Alphas have a penile knot. They’re also very dominant and are biologically attracted to Omegas, who are submissive. Scent-marking and periods of heightened sexual behaviour (known as ‘ruts’ for Alphas or ‘heats’ for Omegas) are also common tropes, as is a degree of sexual violence.

Omegaverse is an old and well-established niche in fan fiction. There’s also plenty of it in published fiction, but it’s usually M/M there. The number of F/M published Omegaverse books is relatively small. By far the most famous F/M author is Addison Cain, who arrived on the scene with Born to be Bound in 2016. She has since become the most well-known writer of straight Omegaverse fiction. It appears that she also considers herself the original writer of straight Omegaverse fiction: 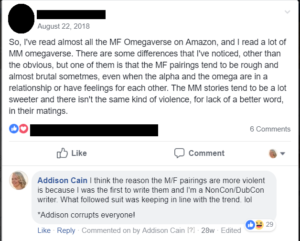 Zoey Ellis is a relatively new author who also writes F/M Omegaverse. Her first book, Crave to Conquer, came out in January 2018. In April 2018, Cain and her publisher Blushing Books filed DMCA takedowns against her books – reportedly including one which hadn’t come out yet – alleging infringement of copyright. Retailers did eventually reinstate these books. However, in October Ellis brought a lawsuit against Cain and Blushing Books. This was basically for damages resulting from Cain’s actions but also covers a range of other issues. 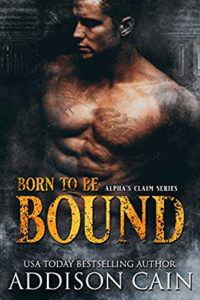 Omegaverse Lawsuit: What Went Down

This does get a little involved at times, so I’m going to try and break it down to the basics.

In January 2018, Ellis’s Crave to Conquer came out, with a decent amount of buzz behind it. In February, Cain messaged Nora Ash, a mutual acquaintance of both authors who also writes M/F Omegaverse, to say that a fan had told her CtC was very similar to her own BtB and to ask whether she ‘need[ed] to be worried.’ Ash reassured her that Ellis’s book was nothing like hers.

But Cain disagreed. After reading it, in April she filed a DMCA takedown on Ellis’s entire series, which at this point was two books strong and had a preorder up for Book 3. (Blushing Books denies having filed a DMCA on the preorder book). Cain claimed that a number of elements, which Ellis calls common tropes of the genre, actually belong to her. Below is a section of the DMCA notice which cites some of these supposed similarities. 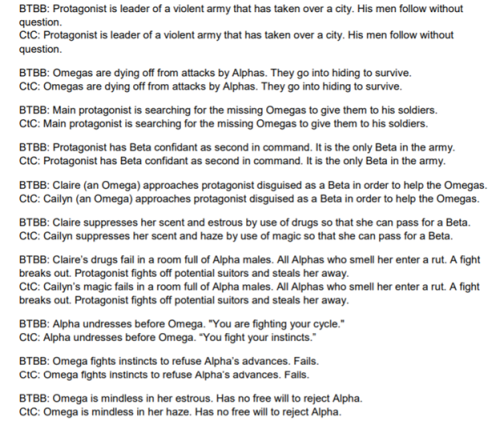 Some of these things are what I personally would consider extremely common elements of the Omegaverse, such as an Omega being mindless in her heat or using suppressants to hide her dynamic. Moreover, it’s a sub-genre which is drenched in themes of non-con and dub-con. Omegas fighting their instincts and Alphas commenting on it shouldn’t be surprising plot points, in this sort of book.

Anyway, Ellis filed counter-DMCAs in May 2018 to get her books back up, but then received an email from Blushing Books informing her that unless she took all her work down again they planned to pursue legal action. 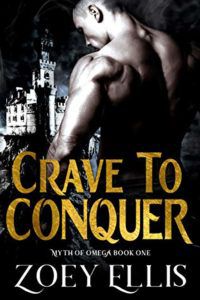 What’s The Lawsuit For?

Partially, of course, the claim is for damages, since Ellis lost thousands of preorders when retailers took her books down. Plus, she’s gained a reputation as a plagiarist. But it’s also for copyright misuse. This involves things like Blushing Books claiming it trademarked its name, when actually their attempt at trademarking themselves was abandoned in 2013.

My Take On It

I’ve read both of these works. For what it’s worth, I’m not 100% convinced Ellis plagiarised Cain, though I’m open to the possibility that I’m just not a very observant reader. I didn’t really enjoy Crave to Conquer (I found it fairly boring) but nor did I feel like it was identifiably a ripoff of Born to be Bound.

It’s also true that Cain has engaged in some behaviour which I don’t consider appealing. For instance, she’s asked her fans to go upvote positive reviews of her book and downvote negative reviews (see below). It may not be technically against guidelines. But an author recently attacked me for my negative review of her book, as part of which she rounded up her friends to try and ‘drown out’ my review like this, and I can’t help feeling wary of such targeted author interference in reviews. 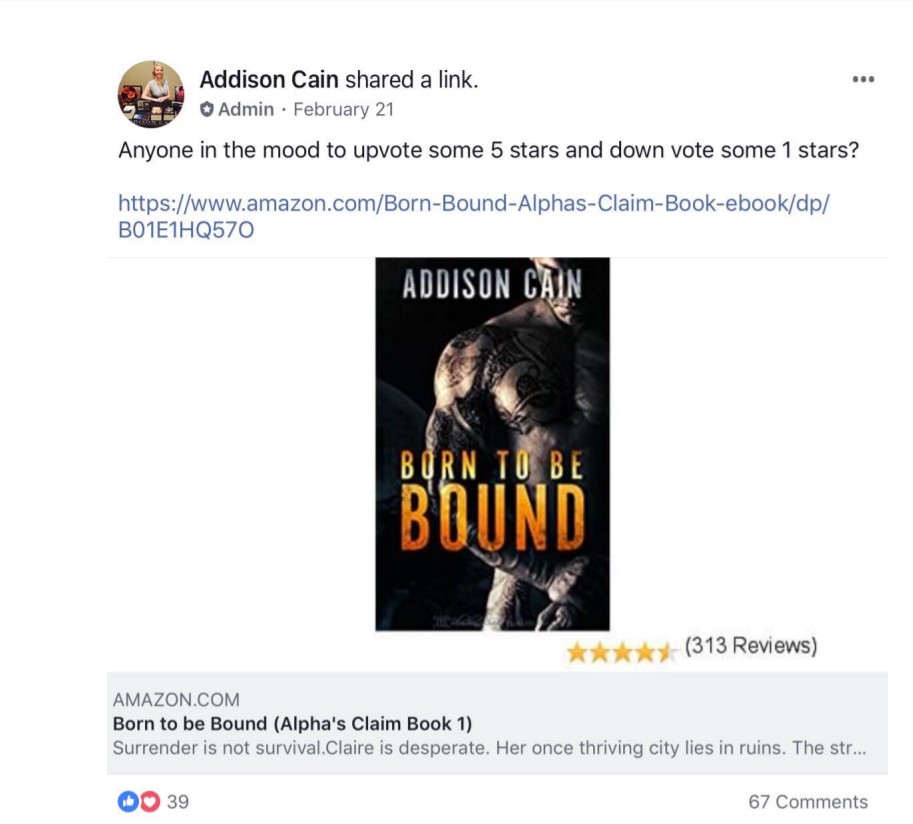 However, despite her possibly dubious claim that she was the first to write heterosexual Omegaverse, Cain freely admits that she doesn’t own the tropes of the genre. She’s actively supported other Omegaverse authors. Moreover, some of the things Ellis is alleging in her lawsuit (such as that Cain bullied and harassed other authors) are unsubstantiated.

It’s a fairly difficult case, and I’m keen to see the outcome.

You can find Cain’s personal take on it here, and here is a blog post by one of her supporters. I also recommend this writeup by an experienced lawyer.