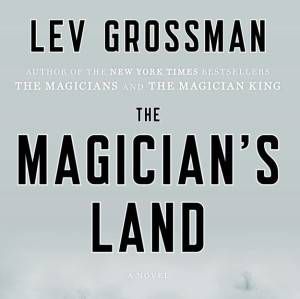 A few years ago, I read The Magicians and The Magician King and honestly, I wasn’t a big fan. I read them both in quick succession because how could I say no to books that were “Harry Potter for adults.”

I’m all for unlikeable characters, but man, I could not get behind Quentin Coldwater as a protagonist. Even the ever-awesome and badass Julia could not get me to enjoy reading The Magician King. Quentin was just so, so awful.

This summer, however, people started chattering about The Magician’s Land. (Namely, Rebecca, Jenn, and Josh of Bookrageous.) I started to seriously question whether I had been wrong about these books.

I decided to read the last book.

Turns out I was wrong, and I wasn’t wrong.

Lev Grossman’s Magicians trilogy is damn near perfect as a whole. This is the way trilogies were meant to be written. I can’t remember the last time I had such a beautiful feeling of satisfaction after finishing a series. Or if I’ve ever been so satisfied with an ending. But it couldn’t have been the fantastic book it is without the two that came before it. I now have every intention of rereading the entire series from beginning to end, to see the story happen all together.

The Magician’s Land opens with a now 30-year-old Quentin in a bookstore, where it turns out he wants to be part of an elite group asked to get something back for a little talking bird. He’s recently been dismissed from a Professor position at Brakebills, and is now dedicating his life’s work to getting Alice back to human from her (absolutely terrifying) niffin-form. Meanwhile in Fillory, Eliot and (also ever-awesome and bad ass) Janet and the crew hear that Fillory is dying and there isn’t a damn thing they can do about it.

Grossman does an even better job in this book than in the former two of holding on to two separate storylines and slowly, but surely, marrying them together. I loved every character in this book, even dumb, old Quentin, who has managed to somehow grow into a not-totally annoying character.

And that is part of what makes The Magician’s Land so great. Grossman’s characters have grown into actual adults who have reasons for the decisions they make. You see a contrast in Quentin and Plum (a young ex-student of Brakebills). I understood Quentin’s decisions, he came at them from an experienced perspective, though half the time his reasoning was little more than ‘I-have-an-instinct’. But I trusted his instinct more than I trusted Plum’s brash and selfish reasons for some of her actions.

Secondly, these characters are now far more comfortable in their own skin. Eliot and Janet are each a High King and High Queen of Fillory. They ooze confidence, and throughout the beginning, I kept waiting for the other shoe to drop, but it never really did. Even when things don’t go exactly how they expect them to, they manage to persevere. It was… dare I say, kind of inspiring?

I almost can’t believe I’m talking about the Magicians series. I actually gave away books 1 and 2 because I was so confident that I would never, ever want to read them again.

(Trust me, I am kicking my past self for that one.)

This is the mark of a good ending. All I want to do is go back to the beginning and start over and reread it through the eyes of someone who is now completely and totally on board.