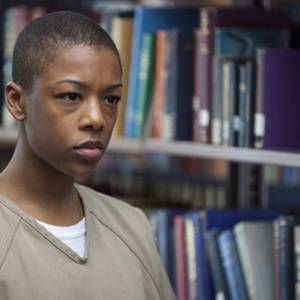 First things first, no spoilers here so no need to read slowly, one line at a time, with your mouse hovering over the Close Window button.

I notice things like Easter eggs and mistakes/goofs when I watch TV/Movies but my favorite thing to spot is what my fictional characters are reading–and the inmates of OITNB read a lot. Whether it’s because of the amount of time they have on their hands or because the writers are huge fans of reading (as writers tend to be) I’m a big fan of all the book-love I see. (I’m also a big fan of Netflix releasing season 3 a day early!) 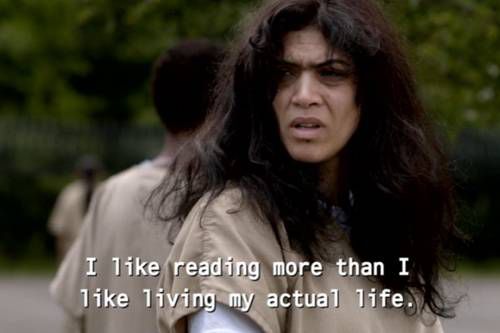 So let’s do this! Here are the book covers and bookish conversations I spied while watching Orange is the New Black season 3. (If you’re like me you’re TBR shelf is about to get much heavier.) 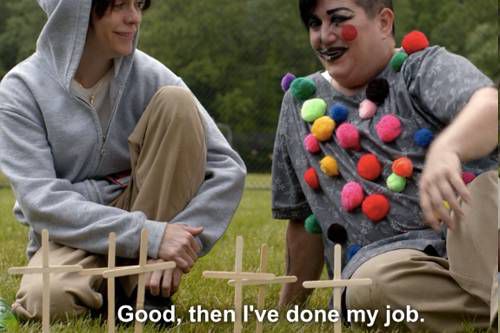 “Mother’s Day” brings us a Triwizard Tournament Harry Potter reference from Taystee, a reading of Calvin and Hobbes, and a clown’s pep-talk that uses Freakonomics to discuss abortion. (One of those might be a fun scene for those still traumatized by IT.) 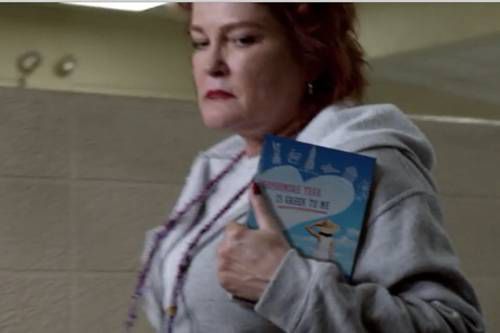 “Bed Bugs and Beyond” shows Red carrying Sophomore Year is Greek to Me, Chapman closing a book I couldn’t make out (Anyone? Anyone?), and Poussey lists the Rats of NIMH as a top 5 book. 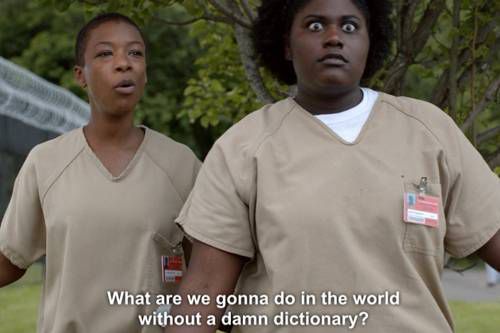 “Empathy Is a Boner Killer” is where Poussey steals the show with her “titles to honor” speech: Great Expectations; THE BFG; The Dictionary; Sister Souljah; A High Wind in Jamaica; ALL of David Sedaris “or Sedari?”; The Treasure of Sierra Madre; The Tale of Squirrel Nutkin; The Jonathans: Swift, Lethem, Tropper, Franzen, Kellerman; Jonathan Livingston Seagull. (Make room Rory Gilmore cause Poussey has a new reading challenge!!) 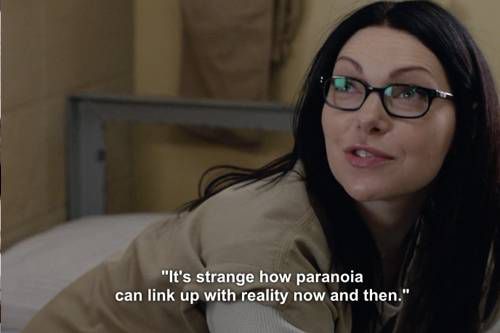 “Fake It Till You Fake It Some More” shows Poussey going through the card catalog and asking Taystee if she’s ever read Arms and the Man, Taystee mentions Winnie-the-Pooh, and Vause quotes Philip K. Dick. (Trivia Answer: Philip K. Dick wrote Do Androids Dream of Electric Sheep? which is the book Blade Runner was adapted from.) 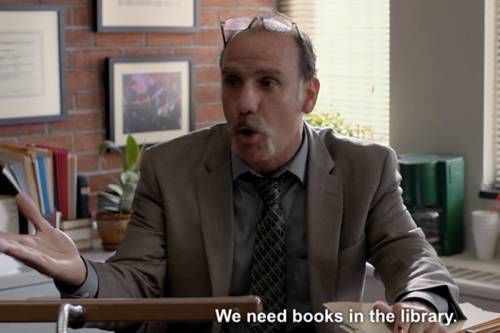 “Fear, and Other Smells” shows Caputo and Alex having their priorities straight: Caputo says, “We need books in the library!” and Alex retires early to read  An English Interpretation of The Holy Qur’an– the cover will be clear in the next episode. (Don’t worry about the request for new books, the inmates find new reading material thanks to a fellow inmate.) 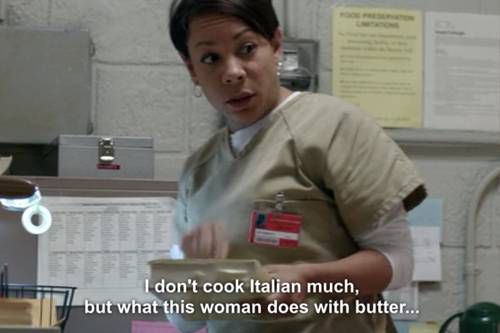 “Where My Dreidal At” shows Gloria and Red sharing a cookbook: Essentials of Classic Italian Cooking. (If it makes the prison food taste better it must be a damn good cookbook!) 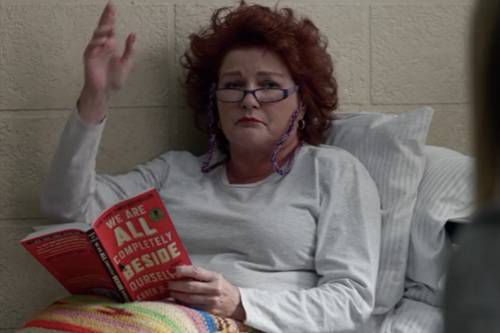 “We Can Be Heroes” shows Red lounging with the book We Are All Completely Beside Ourselves and Poussey suggesting that an inmate write a trilogy like The Hunger Games. (Red and Poussey should really start a book club: Red can supply the books and Poussey can bring the hooch.) 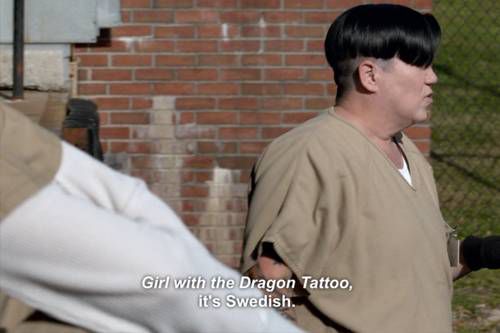 “Don’t Make Me Come Back There” shows Boo channeling her inner The Girl with the Dragon Tattoo and a CO feeling like he’s in Narnia over a bag of mysterious fruit. 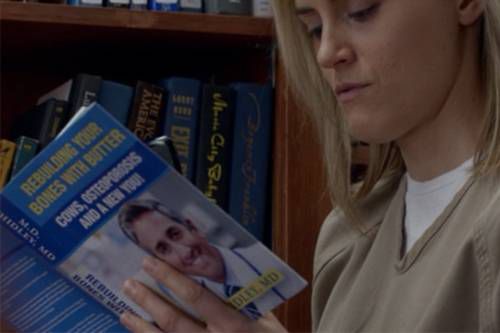 “Trust No Bitch” shows Piper pretending to read Rebuilding Your Bones with Butter; a book Flaca questions the science of while returning a book she disliked. (I’m thinking–hoping–the Butter book is a joke since I didn’t find it anywhere.)

Bonus: The author of Sleepwalk with Me, Mike Birbiglia, is a new cast member.

And to finish this OITNB Season 3 Book Round-up here’s an image of all the books (cause books are purdy) in case you want a reading challenge and/or to pretend you’re in a book club with the Litchfield ladies.