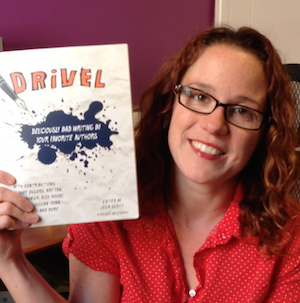 “I tend not to think as much about genre in and of itself … which is to say, I love a lot of genres but I don’t really care about the established tropes except where they’re completely essential. When I get attracted to an idea my brain will often take a weird route to trying to bond with it. Likewise, when trying to get inside a character’s head I’m looking for really basic human connections that are hopefully recognizable to anyone regardless of where or when they grew up. The more I read about Vikings, the more they felt to me like gangsters. For Drifter the part of the future we’re envisioning carries a lot of similarities with frontier expansion. So it’s all organic to the way my brain works.”

“On the one hand: these characters aren’t sacrosanct; they get changed and updated all the time. On the other hand: to turn Wonder Woman into the daughter of Zeus is to take a massively influential female hero and icon whose unique origins lie in the suffrage and birth control movements, and whose origin story is taken directly from Progressive era feminist utopian fiction, and turn her into a stock element in a Percy Jackson knockoff. You could take away Krypton from Superman, too, and decide, say, that Superman is the son of Odin, or that he’s George Washington brought back from the dead, or that he has a sidekick named Watson, or two heads. But then, of course, he wouldn’t be Superman.”

Jill Lepore, author of The Secret History of Wonder Woman, in conversation with The Comics Journal.

So, Underoos are back, for big kids this time around. [Comics Beat]

“Yet Big Hero 6 has little interest in being a superhero movie, and almost no interest in being a Marvel movie. Directors Don Hall and Chris Williams want this to be a Walt Disney Animation Studios movie, which works 100% to this movie’s benefit. Freed from the confines and conventions of Kevin Feige (did you notice how Guardians of the Galaxy, Captain America: The Winter Solider, and The Avengers all had, like, the exact same climactic battle?) and instead pursuing the pathos and wonder favored by John Lasseter, Big Hero 6 is able to move and breathe and stretch out in different directions. In fact, they ditched practically everything from the comic save the character names. Even though it follows a fairly typical supergroup team-up plot, thanks to an emotionally driven story and some fantastic animation, the movie feels like a new and fresh experience.”