This Riot Recommendation is sponsored by HQN Books, publisher of After The Dark by Cynthia Eden. 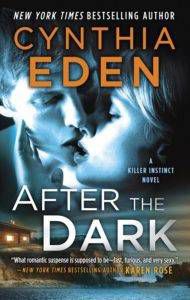 Former FBI agent Samantha Dark was one of the most respected profilers in the bureau, an expert on the twisted minds of the most depraved criminals. But when her own former lover turned out to be the serial killer she was hunting, Samantha’s career was destroyed…

Now an all-too-familiar killer is hunting once again. She can catch the cunning assassin, but that means putting her trust in her former partner, Blake Gamble. She knows he wants her back in the FBI…and possibly more.

But someone else wants her, too. A threat is waiting in the dark, a killer who has set his sights on the ultimate trophy victim—Samantha.

Accounts of Jack the Ripper, The Zodiac Killer, Ed Gein, and other serial killers have served as inspiration for a wealth of fiction and non-fiction titles…and a reason to keep the lights on at night.

We asked you to share your favorite books with the most sinister serial killers, and you responded. Here are 34 of your favorites!

The Road Out of Hell by Anthony Flacco

I Am Not a Serial Killer by Dan Wells

You by Caroline Kepnes

The Snowman by Jo Nesbø

And The Sea Will Tell by V. Bugliosi

I Hunt Killers by Barry Lyga

Victim Without A Face by Stefan Ahnhem

Eyes of Prey by John Sandford

Anyone You Want Me to Be by John Douglas

Portrait of a Killer by Patricia Cornwell