Let’s talk about great libraries. In January, I talked about the two  libraries closest to my heart: The British Library in London, England and the Newberry Library in Chicago. Now I’m going to talk about two more special places: Chester Beatty in Dublin, Ireland and the New York Public (Stephen A. Schwarzman Building). Both are free to visit, which is always a thumbs up in my book.

The Chester Beatty is a magnificent library located within the area of Dublin Castle. It is based on the collection of Sir Arthur Chester Beatty after his death.

Sir A. Chester Beatty is an interesting man in his own right. He was an American born in 1875 who was a graduate of the Columbia School of Mines. Sir A. Chester Beatty was a mining engineer who was an expert in the American West. He moved to London in 1913 after the death of his first wife Grace. There he founded Selection Trust that began mining in Zambia.

In the grand style of many wealthy men, he began collecting starting with minerals, and stamps and eventually manuscripts from all over the world. He fell in love with Egypt and even had a winter house there. Due to his role as supplier of raw materials for the Allies in WWII, he was knighted. He moved to Ireland in 1950 and opened a library in 1954. On his death in 1968, he left his collection of 22,000 objects for the benefit of the Irish public. For more information about A. Chester Beatty, click here. He was inducted into the Mining Hall of Fame in 1998. The library was later moved to its present location in 2000.

The collection  has two permanent exhibitions: “Arts of the Book” and “Sacred Traditions.” The first looks at diverse books from throughout the world through the ages. They have a large collection of papyri manuscripts including Coptic, Egyptian and Greek texts. There were also these beautiful ancient Egyptian papyruses that the library only recently got back after a long journey since WWII! My favorite document was an Ottoman account of the West Indies. We talk a lot about Western Europe’s impressions of the Americas but not a lot about non-Western Europeans’ or non-Europeans’ perceptions of the Americas. The illustrations were astonishing!

“Sacred Traditions”  has an incredible collection of religious texts including some of the earliest known fragments of the Bible. There are religious manuscripts covering the world’s religious including Christian, Jewish, Muslim, Hindu, Buddhist and more.

I also read that there is a lacquer ceiling for one of the reading rooms. However, we had gone on a whim so we were not able to make an appointment to see it. Per the website, you need to do it in one month in advance at least. I imagine you have to check out a book; I don’t think you can just visit to see the ceiling. So next time, that will be top of my list. They also have special exhibitions as well.

Anyone who has seen Ghostbusters is familiar with this massive institution om 42nd street and 5th Avenue. The system was founded in 1895 and is considered the largest public library system in the US with over 92 branches. The flagship or “Stephen A. Schwarzman Building” is one of four research libraries in the system. The collection was founded by bringing together the Astor Library, Lennox library and the Tilden Trust to form the New York Public Library in the 1890s. The unknown firm Carrere & Hastings was selected to create the Beaux-Arts building at 42nd and 5th Avenue, on the site of the former Croton Reservoir. It was opened in 1911, 16 years after the agreement to create the library had formed. The famous lions that flank the entrance are known as Patience and Fortitude and were put there when the museum was dedicated on May 23, 1911. For more history check out the official history here.

Inside you will find this magnificent marble hallways leading to astonishing reading rooms. There’s a map division that was used for Allied military intelligence to investigate coastlines!  In addition to the beautiful rooms themselves, it has a delightful exhibition hall upstairs. When I was there a few years ago, they were having an exhibit on Women in Printmaking, which had works by Queen Victoria and Marie de Medici! Current exhibitions include “Picturing the City: Illustrated Maps of NYC”, “You Say You Want a Revolution: Remembering the 60s”, and much  more. You can read about famous readers’ borrowing records here. 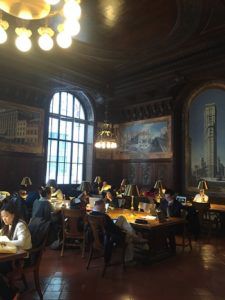 And the piece de la resistance…they have the original Winnie the Pooh. Yes. The original. Along with Eeyore, Piglet, Owl and Kanga. Originally Christopher Robin named the bear Edward but the bear’s name was changed to  Winnie the Pooh based on a black bear in a London zoo named “Winnie” and a swan called “Pooh.” The first story with Winnie the Pooh was published in the story “The Wrong Sort of Bees” in the Evening Standard in 1925. Pooh and four friends went on tour in 1947 after Christopher Robin gave it to his American publisher. In 1956, E.P Dutton and Co. Publishers  put five friends on display. They went back to England twice: once for illustrator Ernest H. Shepard’s 90th in 1969 and then for the 50th anniversary in 1976. In 1987, they are presented to the NY Public Library in 1987 with the blessing of Christopher Milne as long as they were displayed. You can find them in the Children’s Area. 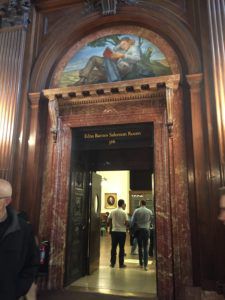 In 1998, a member of Parliament asked for their return and the library declined saying they were happy in their place in NYC. Plus they were too fragile to travel even on loan. Allegedly Prime Minister Tony Blair asked President Clinton about it. You can read about some of the controversy here and here.

I look forward to getting to know both of these great libraries even better in the future! Maybe someday I’ll even read something in one of the Reading Rooms!