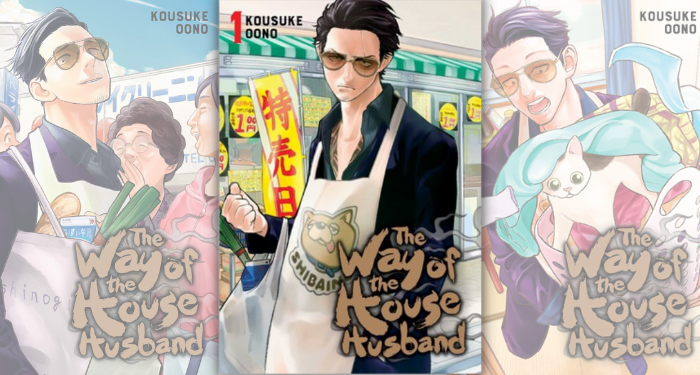 Tatsu. My man, Tatsu. I could probably write a 5,000 word essay on how much I love everyone’s favorite househusband. But this is more a way for me to ask you: Why aren’t you reading The Way of the Househusband, my friend? And if you are, why haven’t we talked about it???

So here’s the story:

I am not a manga Reader. If it has more than 40 volumes, I am going to add the anime adaptation to my watchlist and keep on trucking (and will probably never get to it). I’ll read a one off or short series, and am mostly into love stories or slice of life. If it’s queer, even better! But even with those caveats, it has taken me a while to get to a point where I can call myself a regular manga reader. And it all started with one little story about the homebody with the scar.

Was it a name? Was it a show? It was often mentioned on the comics channel; was it the nickname of a beloved character?

What was this thing?

Eventually, I discovered that it was The Way of the Househusband, and it was a manga series.

That was cool; like I said, I didn’t really read a lot of manga, so out of my brain it went.

But people kept talking about it. How it kept going in and out of print. How legit English language versions were finally available to buy or borrow. How somebody was talking about doing live action or anime.

How awesome it was and how much they loved it.

One day, I found myself wandering backwards through the manga section of my local Barnes and Noble, because why not when it’s the only place you go anymore besides the grocery store, right? And there it was: The Way of the Househusband, Volume 1. The vaguely annoyed, dangerous face of the title character, wearing very stylish glasses and clothing, covered in an apron with a silly cartoon dog on it. Was he holding a grocery bag? Were the signs behind him at a store? What the heck was this thing about?

I read the back and was doubly intrigued, because it told me nothing about this dude. So…I had to buy it. And there was some kind of manga sale going on. Maybe it was a buy one, get one deal? Because I had already picked up Whisper Me A Love Song or I Married My Best Friend to Shut My Parents Up or some other work that was part of a single or low volume story about girls in love. Because that’s what I’d been going to manga for, if I read it at all. Either way, I grabbed it, went home, and made myself a batch of gluten-free cookies.

And then, it was staring at me, so I had to give in and see what the heck had everyone at Book Riot so enthralled.

Y’all. I have never since been the same.

Tatsu is a househusband. He takes his duties very seriously as the caretaker of his home. He knows every trick for cleaning and cooking, and will go all out for a good sale on something that could be useful. He refers to his wife as “Boss,” and even though she doesn’t show up very much in the first volume, you can tell that he loves the heck out of her.

Oh, and he also used to go by the name The Immortal Dragon when he was a high ranking member of an organized crime gang.

When he fell in love with Miku, he left The Life and basically disappeared. But people still know him, and sometimes that gets him into some wild and crazy shenanigans. He pulls a few other folks into his world, and does ridiculous things like get into rap battles with butchers and volleyball matches with rival gangs. In a later volume, he assesses the best way to get in with a women’s association, the baddest, most dangerous gang of old ladies out there. He’s every bit of healthy masculinity you could ever find in a person, while also having to occasionally (and reluctantly) kick somebody’s ass.

Since it’s a series of vignettes, Tatsu’s daily shenanigans — whether they involve groceries, pets, or Yakuza encounters — are at the center of the story. But as someone who loves romance and romantic people, I adore the way we see the ways in which he proves his love to his wife in every action. As a romance fanatic, I would give a few limbs to read the story of how they reached such domestic bliss — OMG y’all, I just realized! There might be fic! (Pardon me while I step over to AO3 for a moment.)

Ahem, anyway. I would love to see the whole story of their courtship, if Kousuke Oono would deign to write us a prequel, even in a single volume, or a longer bonus story than the ones we’ve gotten looking into their meeting, etc.

If you need a little joy in your life, even for half an hour at a time (or however it might take you to get through a volume), Househusband and its seven volumes is the best place to start. Tatsu, man. Our favorite househusband in the world. He’s the best thing about comics today, and I am ever grateful to Kousuke Oono for creating him.