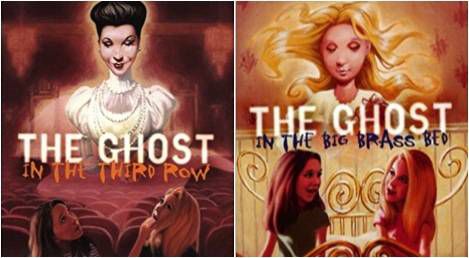 This is a guest post from Ann Foster. Ann can often be found walking very slowly through the aisles of bookstores, making sure that nothing new has come out she doesn’t know about yet. She writes about women from history at annfosterwriter.com, and about books, film, TV, and feminism at various other sites. She prefers her books to include at least three excellent plot twists, and she also owns more lipstick than you. Follow her on Twitter @annhepburn.

When I was in middle school in the 1990s, there seemed to be an endless supply of ghost mysteries to read. Titles like Ghosts Beneath Our Feet by Betty Ren Wright and Ghost Cadet by Elaine Marie Alphin were always on-hand in my classroom library and at the public library. Basically, anything with a slightly translucent person standing next to a shocked-looking kid would catch my attention. Among this genre, the standouts were the Nine and Chris trilogy by Bruce Coville. 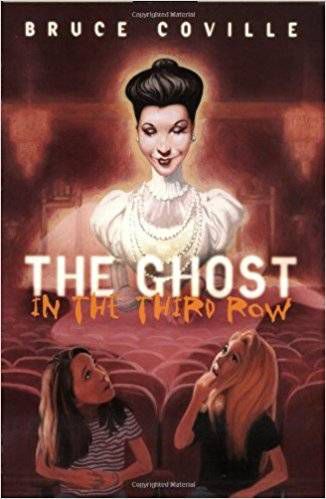 The first of these books, The Ghost in the Third Row, was both a backstage theatre book and a spooky ghost mystery, with a good side of real history thrown in for good measure. It was everything I ever wanted in a book, and my best friend and I adored reading and re-reading the adventures of sensible Nina “Nine” Tanleven and her gregarious BFF Chris. The girls met when they were both cast in a play in a haunted theatre, and helped to solve the decades-long mystery of the theatre’s ghost.

Without getting too spoilery, this book set up the template for how Nine and Chris’s adventures would go. The ghosts they encountered were never malevolent, but always stuck behind due to some unfinished business… usually, justice for their own deaths. The ghosts could never talk, only gesture, leaving the girls to have to research old newspapers and microfiche records (remember those?) for clues as to their identity.

While the ghosts were never scary, one or two adults always turned out to be somehow villainous — perhaps descendants of the ghost’s killer, or of the ghosts themselves, always out to get money or property at the cost of someone else. When Nine and Chris wound up in precarious situations near the end of the story, their ghost friend would repay their kindness by intervening deus ex machina style to save the day. 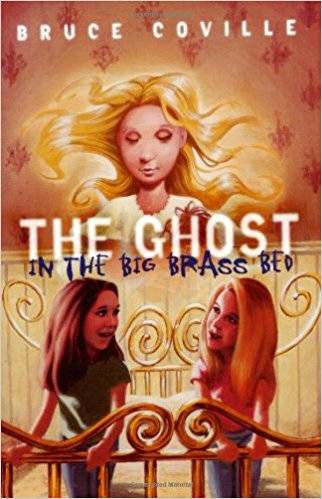 Coville himself has said that of all his numerous publications, the single book he’s most proud of is the second Nine and Chris adventure, The Ghost Wore Grey. In this, the girls wind up investigating an Underground Railroad-related mystery, and in so doing both gain a newfound understanding for the plight of black slaves in American history. The third book in the series, The Ghost in the Big Brass Bed, includes discussions of PTSD, how poorly veterans were treated after World War One, and elder abuse.

I own copies of this full trilogy, and every now and then check back on Coville’s website just in case he’s announced plans for a new adventure featuring these two intrepid young ghost busters. Until he does, however, these books will always hold a special place in my heart and, in my opinion, still stand the test of time for kids today.