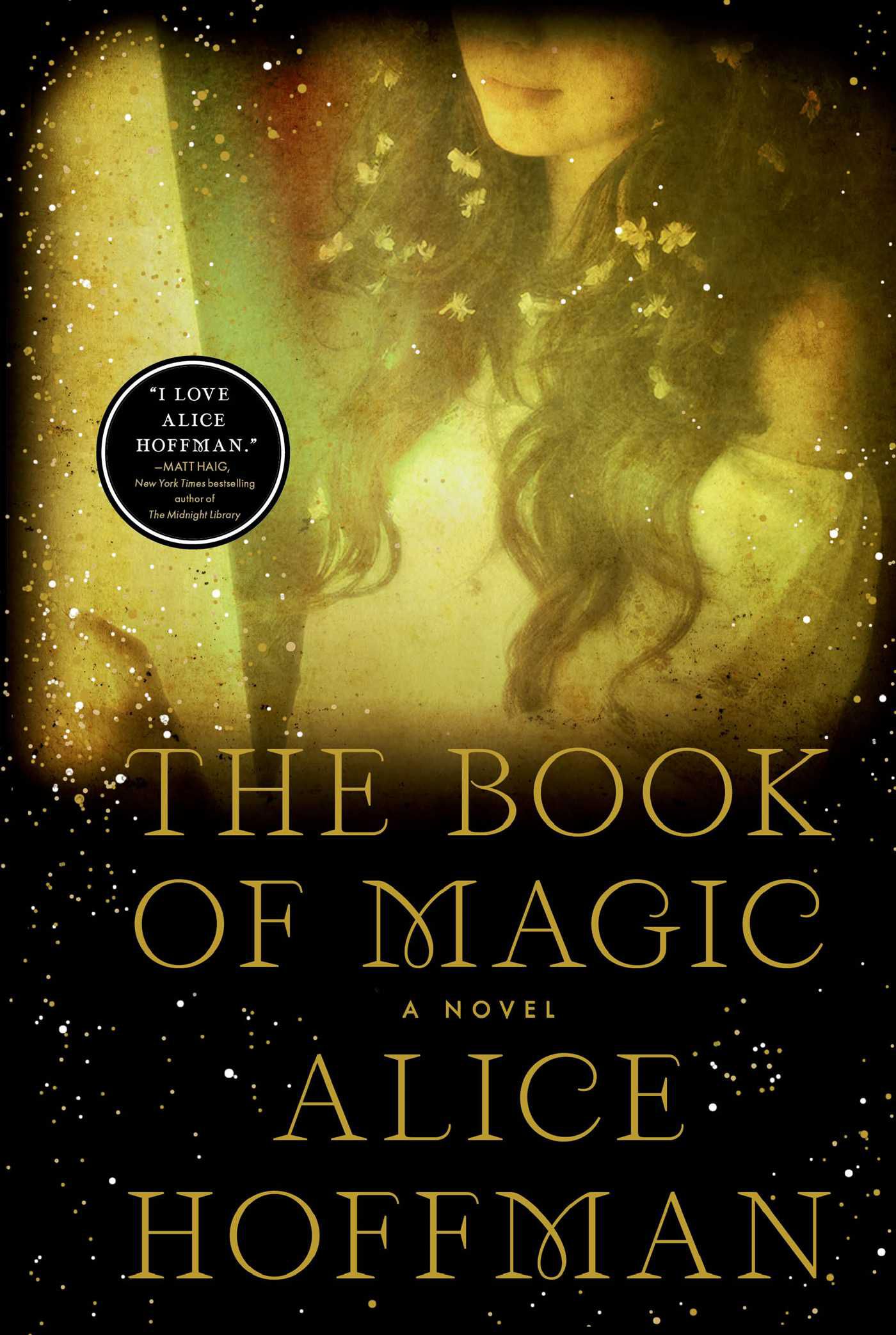 The Book of Magic by Alice Hoffman

The Owens family has been cursed in matters of love for over three-hundred years but all of that is about to change. The novel begins in a library, the best place for a story to be conjured, when beloved aunt Jet Owens hears the deathwatch beetle and knows she has only seven days to live. Jet is not the only one in danger—the curse is already at work.

A frantic attempt to save a young man’s life spurs three generations of the Owens women, and one long-lost brother, to use their unusual gifts to break the curse as they travel from Paris to London to the English countryside where their ancestor Maria Owens first practiced the Unnamed Art. The younger generation discovers secrets that have been hidden from them in matters of both magic and love by Sally, their fiercely protective mother. As Kylie Owens uncovers the truth about who she is and what her own dark powers are, her aunt Franny comes to understand that she is ready to sacrifice everything for her family, and Sally Owens realizes that she is willing to give up everything for love.

The Book of Magic is a breathtaking conclusion that celebrates mothers and daughters, sisters and brothers, and anyone who has ever been in love.

Reasons to read it: This is the concluding novel in the Practical Magic series, taking place after the events of Practical Magic. It brings back the characters from all the three books and brings readers from Massachusetts to Paris and London. Readers are saying this is the best book in the series, and it provides a satisfying ending to a series with devoted fans. 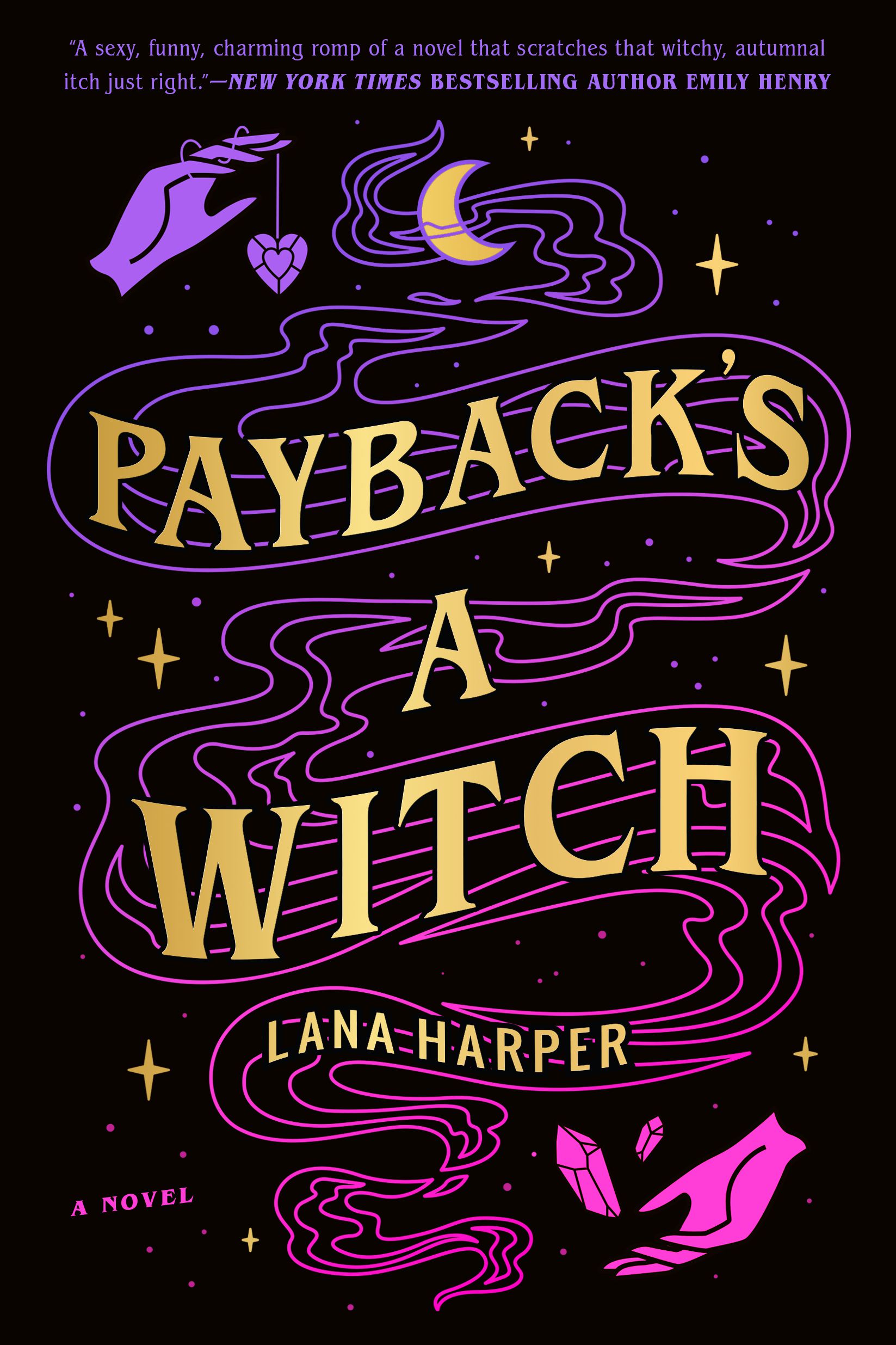 Emmy Harlow is a witch but not a very powerful one—in part because she hasn’t been home to the magical town of Thistle Grove in years. Her self-imposed exile has a lot to do with a complicated family history and a desire to forge her own way in the world, and only the very tiniest bit to do with Gareth Blackmoore, heir to the most powerful magical family in town and casual breaker of hearts and destroyer of dreams.

But when a spellcasting tournament that her family serves as arbiters for approaches, it turns out the pull of tradition (or the truly impressive parental guilt trip that comes with it) is strong enough to bring Emmy back. She’s determined to do her familial duty; spend some quality time with her best friend, Linden Thorn; and get back to her real life in Chicago.

On her first night home, Emmy runs into Talia Avramov—an all-around badass adept in the darker magical arts—who is fresh off a bad breakup . . . with Gareth Blackmoore. Talia had let herself be charmed, only to discover that Gareth was also seeing Linden—unbeknownst to either of them. And now she and Linden want revenge. Only one question stands: Is Emmy in?

But most concerning of all: Why can’t she stop thinking about the terrifyingly competent, devastatingly gorgeous, wickedly charming Talia Avramov?

Reasons to read it: This is a fantasy/romance novel that is saturated with Halloween charm. Not only is it set in a town populated with witches, Thistle Grove also doubles as a Halloween tourist trap. Add to that a revenge plot, a steamy F/F romance, and a tournament of magic — who can resist? This is like watching Halloweentown, if it was a bisexual romance novel. 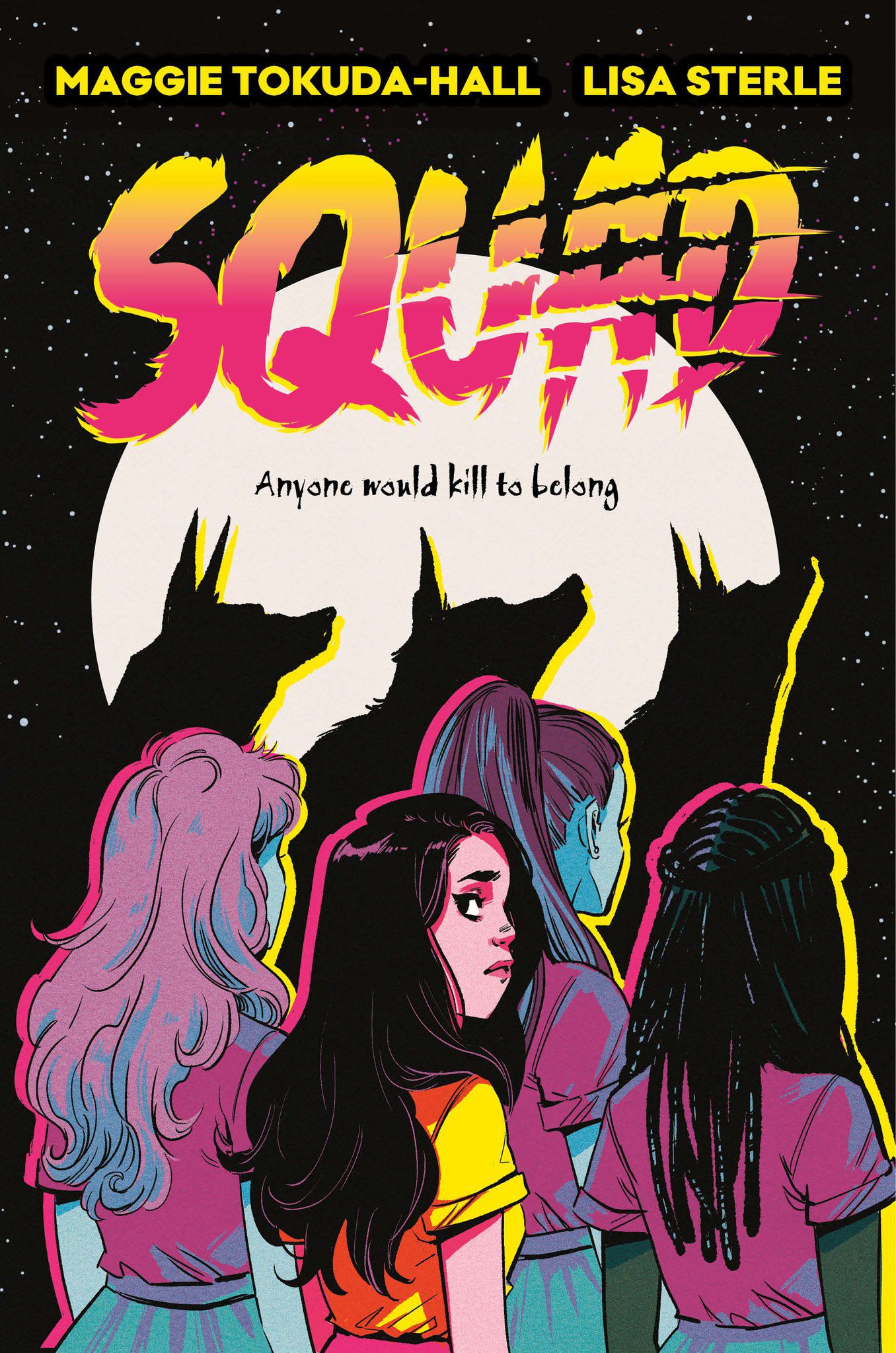 When Becca transfers to a high school in an elite San Francisco suburb, she’s worried she’s not going to fit in. To her surprise, she’s immediately adopted by the most popular girls in school. At first glance, Marley, Arianna, and Mandy are perfect. But at a party under a full moon, Becca learns that they also have a big secret.

Becca’s new friends are werewolves. Their prey? Slimy boys who take advantage of unsuspecting girls. Eager to be accepted, Becca allows her friends to turn her into a werewolf, and finally, for the first time in her life, she feels like she truly belongs.

But then things get complicated. As their pack begins to buckle under the pressure, their moral high ground gets muddier and muddier—and Becca realizes that she might have feelings for one of her new best friends.

Reasons to read it: This is a YA graphic novel that is being called Pretty Little Liars meets Teen Wolf, with a side of Jennifer’s Body. It’s a darkly comedic, fast-paced thriller with a queer main character. It’s also a revenge plot against misogynists. This already has an adaptation in the works, after an eight-way bidding war for the rights! 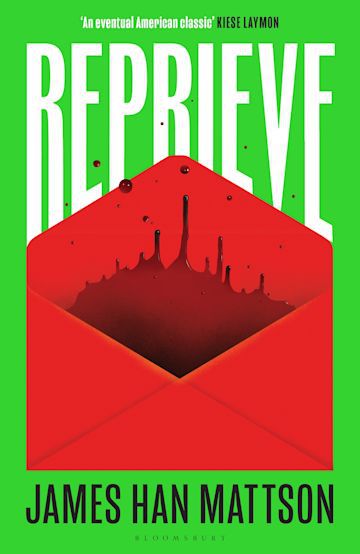 On April 27, 1997, four contestants make it to the final cell of the Quigley House, a full-contact haunted escape room in Lincoln, Nebraska, made famous for its monstrosities, booby-traps, and ghoulishly costumed actors. If the group can endure these horrors without shouting the safe word, “reprieve,” they’ll win a substantial cash prize—a startling feat accomplished only by one other group in the house’s long history. But before they can complete the challenge, a man breaks into the cell and kills one of the contestants.

Those who were present on that fateful night lend their points of view: Kendra Brown, a teenager who’s been uprooted from her childhood home after the sudden loss of her father; Leonard Grandton, a desperate and impressionable hotel manager caught in a series of toxic entanglements; and Jaidee Charoensuk, a gay international student who came to the United States in a besotted search for his former English teacher. As each character’s journey unfurls and overlaps, deceit and misunderstandings fueled by obsession and prejudice are revealed, forcing all to reckon with the ways in which their beliefs and actions contributed to a horrifying catastrophe.

Reasons to read it: This is a terrifying horror novel — just the words “full-contact haunted escape room” give me the creeps — but it’s also an examination of privilege, complicity, and racism in America. If you like your horror to keep you up at night both with sheer adrenaline and with timely social criticism, this is the October read for you. 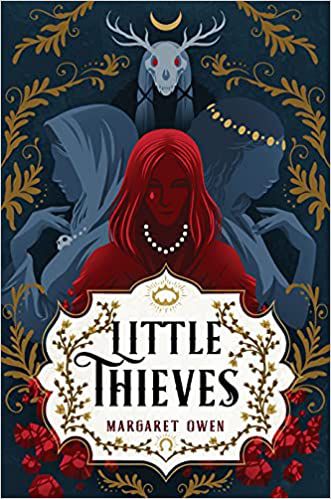 Once upon a time, there was a horrible girl…

Vanja Schmidt knows that no gift is freely given, not even a mother’s love―and she’s on the hook for one hell of a debt. Vanja, the adopted goddaughter of Death and Fortune, was Princess Gisele’s dutiful servant up until a year ago. That was when Vanja’s otherworldly mothers demanded a terrible price for their care, and Vanja decided to steal her future back… by stealing Gisele’s life for herself.

The real Gisele is left a penniless nobody while Vanja uses an enchanted string of pearls to take her place. Now, Vanja leads a lonely but lucrative double life as princess and jewel thief, charming nobility while emptying their coffers to fund her great escape. Then, one heist away from freedom, Vanja crosses the wrong god and is cursed to an untimely end: turning into jewels, stone by stone, for her greed.

Vanja has just two weeks to figure out how to break her curse and make her getaway. And with a feral guardian half-god, Gisele’s sinister fiancé, and an overeager junior detective on Vanja’s tail, she’ll have to pull the biggest grift yet to save her own life.

Reasons to read it: This is the first book in a new YA fantasy series. It’s a retelling of “The Goose Girl” that expands the story in unexpected ways and takes the point of the view of the villain. It will appeal to fans of fantasy heist novels and prickly main characters. There is also an F/F romance between side characters, and this is a queernorm world. 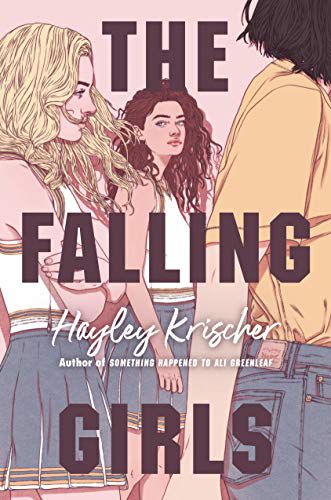 The Falling Girls by Hayley Krischer

Shade and Jadis are everything to each other. They share clothes, toothbrushes, and even matching stick-and-poke tattoos. So when Shade unexpectedly joins the cheerleading team, Jadis can hardly recognize who her best friend is becoming.

Shade loves the idea of falling into a group of girls; she loves the discipline it takes to push her body to the limits alongside these athletes . Most of all, Shade finds herself drawn to The Three Chloes—the insufferable trio that rules the squad—including the enigmatic cheer captain whose dark side is as compelling as it is alarming.

Jadis won’t give Shade up so easily, though, and the pull between her old best friend and her new teammates takes a toll on Shade as she tries to forge her own path. So when one of the cheerleaders dies under mysterious circumstances, Shade is determined to get to the bottom of her death. Because she knows Jadis—and if her friend is responsible, doesn’t that mean she is, too?

Reasons to read it: This is an examination of intense, all-consuming, codependent relationships between girls. Shade loves being so close to the Jadis that they’re the “same person with different hair,” but she also wants out of Jadis’s shadow (if you’ll pardon the pun). The book begins with a prologue showing a cheerleader dropping dead at a dance, then backtracks to how they got there and what the fallout is. There is a mystery element here, but it’s mostly about the tangled relationships between these girls.