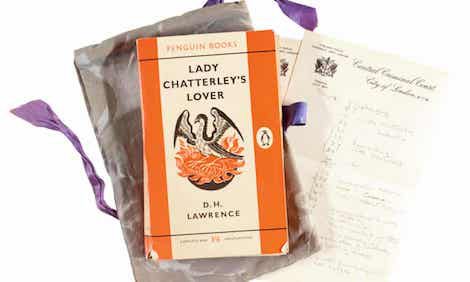 A copy of Lady Chatterley’s Lover used by the judge who presided over the novel’s 1960 obscenity trial, complete with annotations from his wife noting where DH Lawrence descended to writing about “love making”, is set to be auctioned this autumn, for the first time in 25 years.

Own your own piece of literary history.

Reader beware, you’re in for some brand-new scares! R.L. Stine, aka the Stephen King of horror for young adults, recently revealed that he’s got six more Goosebumps books in the chamber at his longtime publisher, Scholastic.

The rise of audiobooks, a small but rapidly growing piece of book publishing, is by now well documented, but rarely is it framed as a tech story. It’s maybe a little counterintuitive to think of what we once called Books on Tape (so cumbersome they had to be abridged to remain affordable) as a format on the disruptive cutting edge. But this decade’s double-digit annual growth — with total sales doubling to $2.5 billon over the past five years — has a clear analog in the e-book boom that preceded it, and the same company has driven it: Audible.com owner Amazon.

This gets a little insider-y, but it’s a fascinating look at the growth of audiobooks.