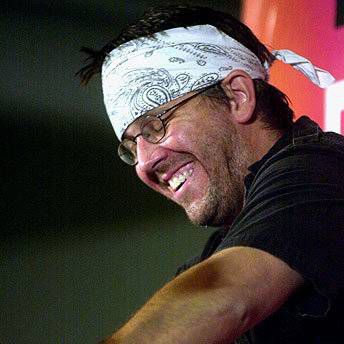 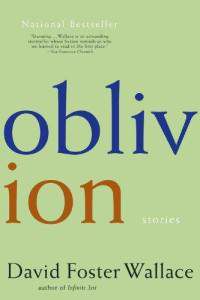 My fingers tap the spines of my books, working from the top left corner of my TBR shelf to the bottom right, pausing occasionally to slide a book from its spot before returning it a few seconds later. They always stop at David Foster Wallace’s Oblivion, the last story collection he published. It’s been there for more than a year now, passed over time and again.

I’m sure I heard the news of Wallace’s death on or shortly after September 12, 2008. While I had read only one of his short stories, it was obvious that a big part of the reading public had been devouring every word this man had to offer. I clicked some links and found a few of his essays and some nonfiction and began to feel like someone hearing Nevermind for the first time in May of 1994. Where had this been? How had I missed it?

And so I set about un-missing everything I could find with his name on it. Yes, the commencement address, of course. An essay collection. The doorstop, with an insufficient dictionary beside me. A book of short fiction (and its film adaptation, just to see how they thought they’d pull something like that off). And so on. I would finish a book and then scour the internet for DFW-related flotsam and jetsam, watching bits of interviews on Youtube, reading profiles and old reviews anywhere I could find them. I’d found a voice that challenged, enthralled, and changed me, that alternately put things exactly as I imagined I would if I had the linguistic capacity and as I would never think to put them at all, and I wanted more.

But all the while, that finite point on the horizon that had been invisible when I started loomed larger and larger. I began to take longer breaks between Wallace’s books and slowed way down when I actually read one, savoring every page-long sentence and footnote along the way.

I was able to stretch his work out over five years, but Oblivion is finally coming off the shelf. In a weird way, this feels more like his true death to me than his suicide ever could have, because Wallace’s work has given me the illusory impression that I know him. For five years, he’s been with me. I’ve taught his work to my students and pushed his books on friends. I even wear one of those little rubber bracelets, given to me by a teacher from South Carolina, that reads, “THIS IS WATER — DFW”. I’ve read the man’s syllabi a half-dozen times, you guys. The phrase, I believe, is “bought in.” Hook, line, sinker.

And now I’ve come to the end. Maybe it all sounds a little melodramatic, the language of obsession and talk of true deaths, but the ones who burn out, who don’t get their chance to fade away, have that effect on us, don’t they? Yes, I can (and will) re-read Wallace’s work. Maybe all of it, at some point. But if you’ve ever felt jealous of someone who is reading a book you love for the first time, then you’ll understand me when I say it just isn’t the same.

Because what’s weird is that we book nerds say we want to be well-read, and we do, but like children desperate for Christmas morning’s arrival, we forget how empty December 26th can feel. There is a magic in the anticipation of a favorite author’s next work. In fact, I would argue that one of the great privileges of being a reader is getting to experience that exact feeling. So yes, finishing David Foster Wallace is both bitter and sweet, but I can’t pretend that reading my way to this point was anything other than the latter.

Thanks, Dave. For five of the best reading years I could imagine. For confronting me. For making me think. For sending me to the dictionary. For lobsters and cruise lines and tennis academies and rehab facilities and diving boards and hideous men and John McCain and Jeopardy! and water. Thanks.