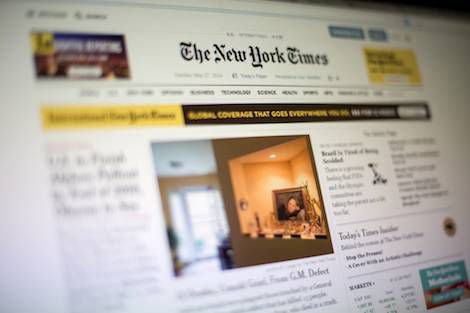 It probably won’t surprise you to learn that I’ve never run a national newspaper. I’ve also never run a local one. In fact, the closest I’ve ever come was spending a year as the news editor of my college paper, and I consider my greatest accomplishment there to be the writing the headline “Something Corporate This Way Comes,” which later got cut by my editor-in-chief. (For those of you who are under 30, trust me—the replacement headline “Rock Band ‘Something Corporate’ Visits Campus” was a real downgrade.)

Given all that, it may not be my place to tell the hallowed New York Times what to do. And when it comes to romance coverage, I don’t need to. When the Gray Lady recently recruited an 86-year-old white, male, romance non-expert to write The New York Times Book Review’s first cover story featuring the genre, it was so bad, the good people at Merriam-Webster considered adding a link to their definition of “patronizing.” (Probably. This might be a thing that only happened in my fan-fic universe version of their Twitter account.) The Romancelandia response was swift and smart, and in the case of our own Amanda Diehl, also delightfully tipsy.

The romance reading and writing community is full of smart, empathetic, resilient humans who have fought and will continue to fight this battle in the same way that they’ve done so time and time again. Given that, the fact that the NYT published this tripe doesn’t bother me nearly as much as the fact that The New York Times as a publication doesn’t seem to give a good goddamn that these kinds of slights keep happening.

Maybe it’s not for me to say that the editorial board or the subscription desk of the NYT should pay attention to romance readers—a population who spend roughly $1 billion a year on romantic fiction, and might be willing to pay for other reading material, by the way. It’s probably not for me to speculate what it means that the NYT is so dismissive of readers who are more than 80 percent female, buy books from Wal-Mart, and are “highly represented in the south.” I’m probably also being silly when I say that, to be completely honest, I kinda think the slogan “All the News That’s Fit to Print” is at least as elitist as it is ambitious.

Except that elitism in news matters right now as much as it ever has, and the NYT’s pretentiousness problem can’t be contained to their dismissal of romance readers, even if the editors—to the extent that they recognize it at all—think this is only an issue for the books section. It’s not a secret that politics in the United States is polarized, and one of the most effective criticisms against the liberal so-called “fake news” has nothing to do with whether or not the news is true; it’s about whether this coverage is catering to what has been dubbed the “liberal elite.” Whether it’s fair and accurate or not, no one falls more squarely into that perception of coverage than The New York Times.

If that type of media discussion seems like it has nothing to do with the NYT Book Review’s romance coverage, then we need to think about why newspapers have book sections or movie reviews or travel pages or sports scores. The idea that the news or politics or opinion sections of a newspaper are completely divorced from the other pieces of that same paper is naïve. For many readers, they’re entirely connected, and the real or perceived sins of one section serve as an indictment of the others. Even for me, a social progressive who tends to vote Democrat, The New York Times is one complete publication: if the editors of the Book Review can so easily dismiss me as a reader, why should I put my faith in the NYT front page or politics page or the paper as a whole?

So I don’t. I may not be qualified to run a newspaper, but I am qualified to decide where to put the roughly $200 a year that I invest in news coverage. Right now, it’s going to The Washington Post, which covers my local news and also includes a variety of cultural perspectives and criticism; NPR, from whom I get my national news and many of my podcasts; and The Mary Sue, in whom I recently decided to invest instead of The New York Times. The Mary Sue doesn’t do a lot of romance coverage, but at least they have demonstrable respect for women as consumers of entertainment and culture.

No section of any newspaper, news site, culture site, or book site exists in a vacuum. Romance readers reflect a broad swath of society, from race to class to sexuality to age to a variety of other categories. The way The New York Times is covering romance in their books section reflects how the people working at the internationally renowned publication think of romance readers. It’s not highly.

As I said, I’m not a newspaper editor.  But if I were, I’d like to think I would never lean in to serious allegations of elitism, and I certainly wouldn’t do so right now. I would actually cover “All the News That’s Fit to Print” and I’d report on how self-published romance authors are moving the independent publishing field. I would talk with authors and publishers and editors and bloggers about the unique nature of romance fiction as one of the uniquely female-driven sectors of entertainment in the United States.  I would interview Alyssa Cole, Beverly Jenkins and other authors who set their historical romance in the United States. (Side note to the NYT Book Review team: based on the Oct. 1 piece, you might want to ask Cole, Jenkins, and their colleagues to teach you a few things about research.)

But if the Times cared about a genre that makes up about one third of the adult fiction market, they probably would have done a better job of covering it before now, and they definitely would have done a better job of responding to criticism of their review. Instead, they doubled down on it. Radhika Jones, editorial director of the books section, suggested the frustration came because romance readers just don’t like it when people critique their “‘beloved’ romance writers,” a response which completely ignores the legitimate critiques being offered—for example, the racism, the sexism, the heteronormative nature of the review, the writer’s lack of understanding of the genre—and illustrated the NYT’s complete unwillingness and/or inability to understand the point. Then the publication went a step further, and patted themselves on the back for having exposed to romance a condescending pool of readers that they helped to create with their elitist book coverage, publishing a quote from one reader named Lorraine who begged, “Give us fiction, nonfiction, poetry or biography, but spare us the bodice rippers of romances.”

You know what, New York Times Book Review? Go ahead. Spare them. Let’s just each pretend the other doesn’t exist. You go ahead and ignore all romance fiction (not to be an NYT-style book snob, Lorraine, but romance novels are a kind of “fiction”) and spare us romance readers your self-righteous, sexist, racist “critiques.” In turn, I’ll save myself the trouble of defending you and the pretentiousness of your publication the next time I’m arguing with my conservative family members over dinner or it comes time for me and my friends to decide where to spend our subscription dollars.

Pass my regards—and maybe your apologies—on to your colleagues on the Times news team.