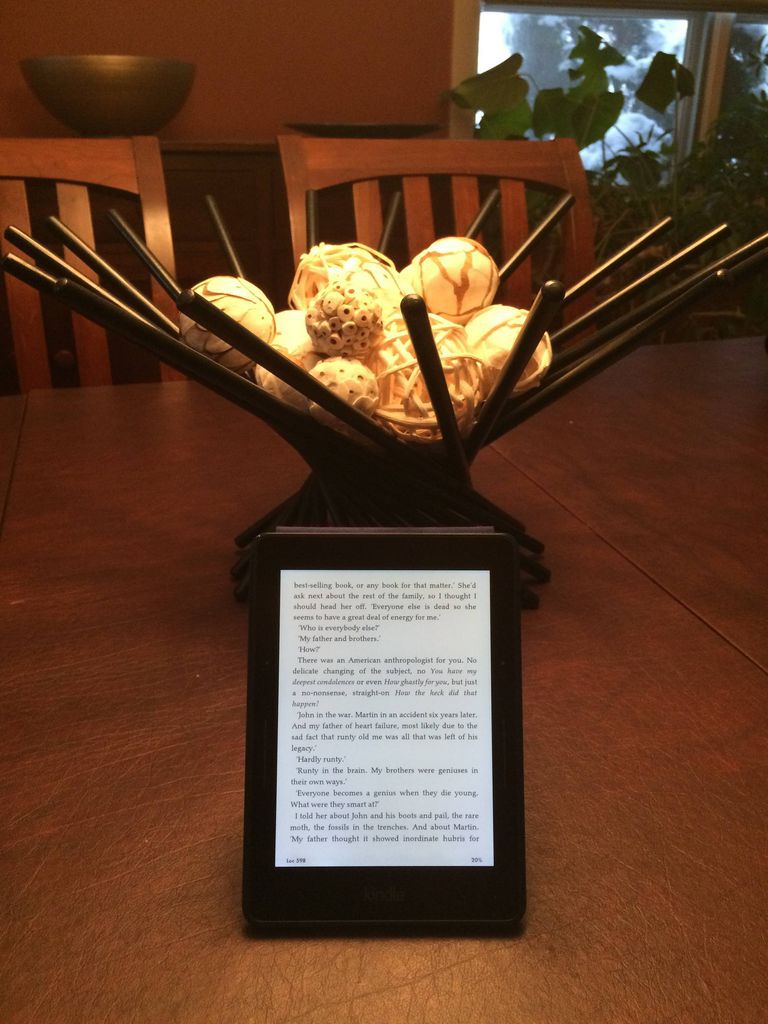 I’m not usually an early adopter. I drive a twelve year old car, live in a ninety year old house, and still wear a sweater my mom gave me in high school. But when the first Amazon Kindle came out in 2007, I bought it, and I’ve been keeping up with new versions ever since. Somewhere in my house is that ugly $399 first generation Kindle with the slanted keyboard, a Kindle Touch with lighted cover, and both versions of the Kindle Paperwhite. I believed the Paperwhite was the best it could get for an ereader (or at least for an Amazon version), until I started reading on the new Voyage. 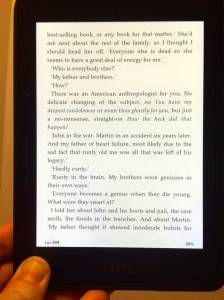 Size wise, the Voyage retains the 6 inch display and is just a little bit thinner (0.30″), lighter (6.3 oz), and smaller in dimension (6.4″ x 4.5″) than the Paperwhite. It’s very easy to hold in one hand, even with a cover, and it’s lighter than most paperbacks I own. Amazon says a charge lasts for six weeks, but you have to adjust this down if you are a heavy reader, use the Wi-Fi, or use the built in light a lot. It has 4GB of storage (really about 3GB after subtracting the space the operating system takes up), plus Amazon cloud storage, and comes in the standard Wi-Fi only or Wi-Fi plus free 3G versions. A basic Wi-Fi Voyage with ads will cost you $199, but you’ll get up to $289 if you want 3G and no ads.

Why on earth would anyone pay that when they can get a basic Kindle for $79 or a Paperwhite for $119? Heck, for $200, you can buy a tablet that does a lot more than an ereader. Personally, I want an ereader that does one thing and does it well. As much as I love reading, I can get easily distracted by email or Twitter when I use my tablet, and my phone is just too darn small. E-ink is readable in more settings (like bright sunlight), looks much more like ink-on-paper, and is easier on my eyes than a back-lit LCD display. Plus, I don’t want to have to charge my reading device every night. I still love paper books, but often I prefer the ereader for its lightness, choice of font sizes, and built-in light for night time reading that doesn’t disturb my sleeping spouse. I also like audio books, and if I own both the digital and audio versions, they sync, always keeping me at the spot where I left off.

If you’re happy with your ereader, or if you’re thinking of buying a new one for yourself or a friend, what are you getting for plunking down $200 for the Voyage? Well, for starters it looks nicer and is a little easier to use. The Voyage’s smooth glass screen is flush with the matte magnesium body of the reader, unlike the recessed display of earlier versions of the Kindle. I was worried about glare when I heard about the glass, but I think there’s actually even less glare than with the Paperwhite, which had almost none. The Voyage has a recessed on/off button on the back, easily reachable with your finger. You can turn pages by tapping or swiping the display, but Amazon has added “PagePress sensors” on the sides that you can press instead. They don’t have the satisfying clunk of an actual button, but you get some haptic vibration feedback right where you press (in other words, it vibrates only under your thumb). You can adjust the amount of pressure needed and also the intensity of the vibration, or you can disable the whole thing and just swipe the screen. Not having to move your thumb to turn the page is one of those little improvements that only some readers will really care about.

With a resolution of 1430 x 1080 and 300 pixels per inch, the Voyage has the highest resolution of any ereader on the market right now, meaning the contrast is very high and the letters are really clear and crisp. As much as I liked the Paperwhite, I always knew I was looking through a screen to see digital letters. The Voyage screen is so smooth and the resolution is so precise that it really comes close to the feel of a paper book. Images also look very good. Although it’s not in color, and so of limited utility for comics readers, if you read graphics-heavy works in black and white, the resolution upgrade would be significant.

One of the best improvements the Paperwhite made over its predecessors was the built in light. No more clipping on a book light or finagling the integrated light in the Amazon cover only to generate very uneven lighting across the page. The Voyage lighting marks an improvement over the Paperwhite in two ways. First, the it has five LED lights at the bottom of the device, and it seems more even. Second, you can set it to adapt automatically to the appropriate brightness for your environment. I never thought adjusting the light (by tapping a few places on the screen) was exactly a hardship, but it did take me away from the text, so it’s nice to have the Voyage do it for me. 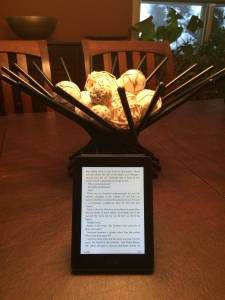 Anyone who is used to touchscreens on a smartphone or tablet is bound to be frustrated with the touch speed of an ereader. It’s just slower. But the Voyage improves on the situation with a capacitive touchscreen that is noticeably more responsive than past versions of the Kindle. As far as page turns, they seem plenty fast enough for my reading speed. The Voyage also has some software upgrades, but typically all of the Kindles that can handle them get these for free in pretty short order. Finally, the “origami cover” Amazon is selling for $45 (!!) turns it on and off when opened and closed, and folds to allow you to stand the Voyage up if you want to read while, say, eating or cooking. It’s fine, but I really wished it opened right to left like a book, rather than from bottom to top like a steno pad.

So, should you spend $199 for the Voyage? As a dedicated digital reader, I’m happy with my purchase. I didn’t “need” it any more than someone needs the newest smartphone or tablet. Basic ereaders work very well, and there are lots of reasons someone might prefer a (similarly priced) high end e-ink reader from Kobo or Onyx. For me, it’s the high resolution, the even and automatic lighting, and the fit and finish that seal the deal. I think $199 is a little too high, but Amazon is backordered on Voyages until early to mid December, so it seems the demand for a premium ereader exists regardless of price.