A woman seeks to avenge her murdered sister. Just one problem: Lila was a mistress for a powerful Washington D.C. politician. Normandy Gold finds resistance from apathetic police, who couldn’t care less about one dead woman, and from people who want to sweep another corpse under the rug. That doesn’t deter her. She will avenge Lila. 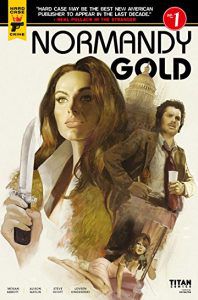 The graphic novel, Normandy Gold, is out this month. Creators Alison Gaylin and Megan Abbott sat down to talk about their latest work, about their inspirations and how women are viewed in media.

You’ve mentioned wanting to recreate ’70s movie atmospheres in this comic. What elements of these films do you want to bring to a modern audience, especially the ’90s kids who have grown up?

AG:  Looks wise, I think one of the things we wanted to bring to the comic was the grit of ’70s movies. There’s a very dark, dirty, visceral appeal to films like Hardcore and Taxi Driver that we found compelling. We also wanted to introduce the element of paranoia that’s so prevalent in ’70s conspiracy thrillers—the feeling of always being watched and of evil lurking around every corner. I think that’s a quality that ’70s movies had that’s particularly resonant today.

MA: I associate the ’70s with a kind of searing disillusionment in traditional institutions, and I think that’s something many of us are experiencing now. A sense that all the old rules and expectations are meaningless. That traditional moral and ethical structures feel rife with hypocrisy and deceit. It’s both harrowing and also, potentially, liberating.

The more things change, the more things stay the same. How do you feel about the comic releasing at the same time giant scandals are hitting the White House?

AG:  It’s interesting because we came up with this idea quite a few years ago. Yet so much of what we were saying, not only about Washington corruption but about the power of female rage, feel incredibly relevant right now.

MA: To Alison’s point, I think it speaks to how it was all there, all along. We, as women in particular, have lived with this—harassment, predation, not being listened to, being silenced by powerful men—all our lives. But the election and everything since set that all in high relief. We feel everything so intensely now because the veil has been lifted, you know?

Normandy Gold touches on a sobering truth that sex workers are afforded less compassion and justice due to societal stigmas. How hard was it to portray that, emotionally speaking?

AG:  It was something, both character-wise and plot-wise, that were essential. It had to be believable that the disappearance of someone like Normandy’s sister Lila—a sex worker, albeit a “high priced” one—wouldn’t be afforded the same thorough investigation that someone more “respectable” would. It’s awful, and yes, it was hard to portray.

MA: Very hard, indeed. It is one of the great shames of our society, the way we stigmatize, ignore, stereotype and marginalize women and men involved in sex work.

Normandy is a unique character, as the single-minded avenging older sister who blows into town and prepares the big guns. Did she ever surprise you?

MA: Always! That’s what made her so fun to write. She was our id, unleashed!

What is your creative process, in terms of creating a story and fleshing it out, panel by panel?

MA: Purely instinctual, based on both our comic reading, but even more so, our movie-watching. We’re both movie lovers and visually-oriented and that really came into play. And we knew from the start that we wanted to use the voiceover to carry the emotional weight. In life, Normandy speaks very little, but in the voiceover she confides everything to the reader.

What methods do you use to craft the script, and to present the artwork? Are there tools that you prefer?

AG:  In communicating the visuals we wanted on the panels, Megan and I not only provided descriptions, but in many cases, we dropped in headshots and movie stills. We felt that helped communicate the feel we were looking for—and it also gave us more than a few celebrity lookalikes in the roles!

Can you give us any hints about potential sequels?

AG: Well, spoilers aside, the ending does present possibilities…

What other upcoming projects should we look for from you?

AG:  We both have novels out this year. My novel IF I DIE TONIGHT is out now, and  I’m currently working on another novel called CLOSURE, which should be out late next year.

MA: My new novel, GIVE ME YOUR HAND, comes out in July.

What’s your movie rec list for readers who have just finished Issue 1 of Normandy Gold?

MA: All those, and I’ll toss in All the President’s Men, Blow Out, Dressed to Kill.

Normandy Gold, Issue #1, is out today. Be sure to pick up a copy! And find even more comics news here.