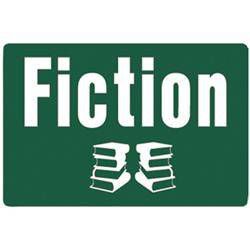 Turns out that the library sign in Manly, Australia, directing readers to the fiction section to find any Lance Armstrong books, was a prank. Even without an official sanction, though, it’s a satisfying, straight-shooting solution. (Does anyone else remember Alice pulling a similar move in the film Last Days of Disco?) Here are some other we’d like to see reshelved as “stranger than nonfiction.”

The bestselling memoir got a new level of scrutiny when the Smoking Gun website debunked many of Frey’s claims in an article starting “Oprah Winfrey’s been had.” The publisher extended refunds to readers who felt duped. Frey later went down a po-mo path, saying that there is no truth anyway.

Not content with the disclaimer of exaggeration in Sedaris’s story collection, Alex Heard fact-checked material and wrote an exposé in The New Republic. Sedaris deflects these accusations by reminding readers that he’s a humorist, not a journalist. Could we put a token Sedaris in fiction and then leave the rest on a special table decorated with taxidermied mice?

In 2009, Palin’s memoir even outstripped Dan Brown on the Amazon pre-sales list. But her version of the McCain/Palin campaign came under fire by McCain’s staffers, who rebutted many of her assertions. As Rioter Peter Damien notes, “Really, any book written by a politician. Particularly one trying to get elected. Off to fiction!”

Love and Consequences by Margaret Seltzer

Do you still have a copy of this? It could be a collector’s item. This supposed memoir traced a girl’s life as a half–Native American member of the Bloods gang in inner-city Los Angeles. Oprah loved it, the New York Times loved it, but it turned out to be completely made up by an all-white girl from the ’burbs. Seltzer’s sister outed her and the book was recalled by the publisher.