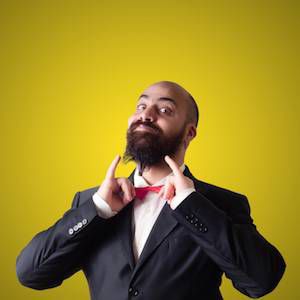 I took a trip toward the end of this past summer and forgot to bring my razor. I could have easily bought a replacement, but it hardly seemed worth doing at the time. Thus was my August Vacation Beard born. Hey, free souvenir, right?

I kept the beard when I got home without thinking about it very much. For me, inertia was justification enough, but other people seemed to need a reason for the change in my appearance. How could I go from shaving regularly to not shaving regularly? So I had to say something.

When September rolled around, I told people I was sporting a Playoff Rally Beard. It almost worked, too. The Mariners were in the race until the very last day of the season, which hasn’t happened for over a decade. That excuse kept me going for another thirty days, and then I coasted. October became Halloween Beard month. “I’m going to be a lumberjack,” I said. I put on a flannel shirt and jeans–done.

But then I hit a wall. After the trick-or-treating was over, would I have to break out the Barbasol? Casting about for a new rationale, I did what I always do when I’m looking for answers and turned to the bookshelf. Lo and behold, I found my cause. November’s is the Beard for Book Promotion, with three titles in particular to support.

Badass Civil War Beards by Anna Hider and Julia Hider is a visual smorgasbord of follicular folly. The middle years of the nineteenth century marked the peak of hirsute creativity in America, and the Hider sisters have chronicled the glorious excesses of the era, from Burnside’s sideburns to J.E.B. Stuart’s cascade of natural curls, for today’s appreciative audiences. The modern hipster can use their book as a humorous and inspirational guide, but only where facial fashion is concerned. Let’s just hope that the Williamsburg crowd doesn’t decide to recreate the New York Draft Riots. 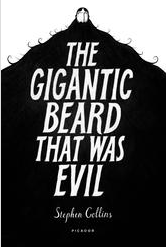 The Gigantic Beard That Was Evil by Stephen Collins is a more substantive volume, a graphic novel about an unassuming man whose life is taken over by … well, you get the idea. The allegorical story is more than adequately Kafkaesque and kooky, but the art is the real showstopper here. You can obsess over panel after carefully crosshatched panel for hours without feeling you’ve exhausted the book’s possibilities. The black-and-white interior is rich with nuance and depth, but I also like the flatter aspect of the cover. Reminds me of the work of Aubrey Beardsley. Honestly, I’m not making a pun. Not just a pun, anyway.

True disciples of the manly art of (non-)grooming will seek out a rarer treasure in the form of a copy of The Philosophy of Beards. Its author, Thomas S. Gowing, a man of some mystery, appears to have been a Victorian-era stereotype, the perfect combination of genius and crank. He originally delivered his text as a lecture over a hundred and fifty years ago, but his fervor for his subject remains evident in this newly-reprinted edition. The first growth of beard in adulthood is “one of the most important natural changes in a man’s constitution,” says Gowing, and further asserts that a hairy chin should be proudly displayed throughout life. “There is scarcely indeed a more naturally disgusting object than a beardless old man, [looking like a] plucked pigeon … with all the deep-plowed lines of effete passions, grasping avarice, disappointed ambition, the pinchings of poverty, the swollen lines of self-indulgence, and the distortions of disease and decay.”

Save yourselves from this horrible fate! Join your bristly brethren for No-Shave November! I’ll be right there with you in the trenches.

And in December my beard will carry on. Stuff me with sugarplums and call me Santa.