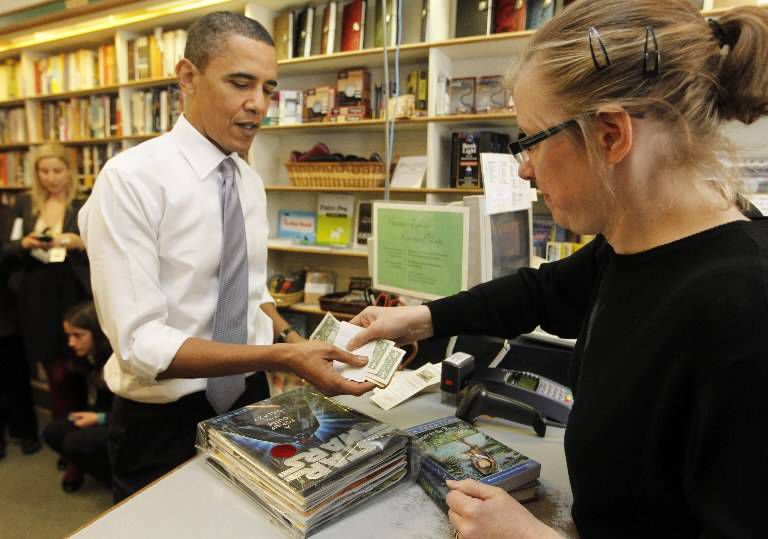 On Monday, it was announced that Obama would give a speech in an Amazon warehouse.

If you took Academic Writing or Intro to Logic in college, you know that that right there is a big ol’ logical fallacy, and it’s a trap the bookish internet falls into a lot thanks to a slathering rabid hatred of Amazon that often defies logic and sense (see also: discussion of ebooks on Facebook). It’s certainly some bear baiting the good folks over at Publishers Weekly couldn’t resist, with their not-at-all controversially titled, “Does President Obama Hate Indie Bookstores?”

Let me answer that one for you, folks: nope.

So now we can all go home. Ok, I kid. But, you know, Obama is and has been throughout his presidency a demonstrable supporter of individual indie bookshops like Seminary Co-Op in Chicago, Prairie Lights in Iowa City, One More Page Books in Arlington, and Bunch of Grapes in Vineyard Haven.

Apart and aside from whether Obama himself shops at indie booksellers, this tour he’s on is about promoting job creating industries in America, and whether you want to acknowledge this or not, Amazon creates more jobs each year than does the indie bookshop world.

I would like to say a few things up front about Amazon.

I’m going to hold those two thoughts simultaneously in my head while pointing out:

There is class and social privilege at the core of this debate. It is a luxury to spend time browsing a bookshop and a luxury to willingly choose to spend more money to support a cause you believe in. It is a luxury, and an increasingly urban one, to have access to a bookstore at all. The Twitter convos where people slam Amazon shoppers remind me of the debates of the early-2000s that villainized the Walmart shopper rather than the larger economic mechanisms that allowed for Walmart’s success.

Which brings me to #2. Amazon exists within a crucible of existing business practices. Many of these practices suck. But Amazon didn’t create the climate it is exploiting. I have a hard time listening to the rhetoric around the evil of Amazon and the moral superiority of indie bookshops from people who purchase all their music from iTunes or eat factory farmed meat or only watch movies via Netflix. The indie record shop, local farm, and corner video shop that have all fallen to these contemporary changes are part of the same business model that has allowed Amazon to flourish. But books are sacred and fetishized, and indie bookshops enjoy a certain cultural cache among the Twitterati, so it’s cool to hate Amazon.

But #3 is the kicker, and it’s why Obama talks job creation at an Amazon fulfillment warehouse and not your favourite indie bookseller: Amazon pays better. Significantly better. Here at Book Riot, we looked up the numbers. The average warehouse worker at Amazon makes $11.69 / hour plus benefits. This is not a king’s ransom, but it’s a fair few steps further along the road to a living wage than the numbers we pulled from the Bureau of Labor Statistics, which notes that the median hourly pay of book store and news retailers’ retail sales workers is $9.21 / hour, with cashiers at $9.08 / hour and stock clerks at $9.45 / hour. Whether those shops offer benefits varies on a business by business basis.

Hm. So what do we do with that info?

There are lots of problems with Amazon and lots of reasons to be concerned about the future of the diversity of book sales. But to be surprised that the President is interested in aligning himself with an American business that is creating jobs that pay substantially better than the indie alternative? That’s naive and silly. Indie bookshops need to stop chucking rocks at the high profile stories and find ways to sell their relevancy — and lower paycheques — to Americans. That’s the path to survival.

It’s just not nearly as much fun.