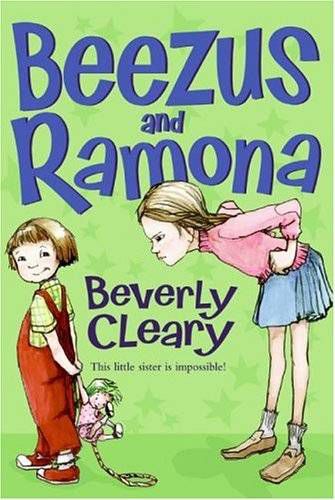 A few weeks ago, when I wrote about my love for Beverly Cleary, Book Riot commenter Namil_Kim and I bonded over our love of Beezus Quimby. Poor, beleaguered Beezus lives forever in the shadow of her gregarious, daring, outrageous younger sister Ramona.

Ramona gets all the glory. In fact, a lot of younger siblings get the glory while their elder, trailblazing siblings get shoved into the background. It’s no fair! And I don’t just say that because I am the eldest of four. Oh wait, yeah I do.

Let’s start with the big kahuna of overlooked eldest siblings, Meg March. Poor Meg, who is the replacement Marmee when Marm’s is off tending to Father? Meg. And what’s her thanks? Her big scene involves her being vain and petty about her hair and the lack of pristine white gloves. It’s a shame, too, because ol’ Meg is a kind, nurturing caregiver to her younger sisters. Does she get any glory? No, it’s the thankless job because she’s not the real mom.

Another in the eldest-sibling-as-parent role, Dally Curtis. Dally’s got his hands full raising two siblings, Sodapop and Ponyboy, in the wake of his parents’ tragic death. Not only that, he’s basically the father figure to the whole band of dysfunctional greaser teens that hang out at his house. This can’t be easy for ol’ Dally either. He was a preppy, college-bound kind of kid until his parents died. I think it was Two-Bit (forgive me, it’s been decades since I read The Outsiders) who made the observation that Dally would be a Soc if it wasn’t for the greasers who congregate at his house. And what’s Dally’s thanks? Nada.

Next up we have the aforementioned Beezus Quimby and Peter Hatcher. These two are inextricably linked in my mind. Probably because when I was a kid, I moved right from Clearly’s books into Judy Blume’s books. Also, Peter & Fudge are just modern, male versions of Beezus & Ramona. And by modern, I mean Peter & Fudge are circa the 70s while Beezus & Ramona are from the 50s. Is there a more modern sibling duo that shares this kind of dynamic, where the older sibling sort of chronicles the younger siblings outrageous, and ultimately more memorable, activities?

Beezus and Peter are often overlooked because their younger siblings are total brats and do all kinds of naughty things that Beezus and Peter are often held responsible for, because they’re the older siblings and should know better. So much no fair. Also, Fudge and Ramona are often digging around in their older siblings stuff and do they get in trouble? No! Can you tell I have a lot of residual angst regarding bratty, nosy younger siblings? They probably have therapy for that.

Finally, I will end this post with someone who is probably the most overlooked eldest sibling of all time: Mary Ingalls. She’s not fictional, so she probably shouldn’t be included on this list, but when I rant about how the younger sisters of pop culture get all the glory to my younger sisters (and oh yes, I do rant), I always mention Mary. Poor Mary didn’t even get an affectionate nickname ala Half-Pint from her father. How could we ever expect her to shine?

Now, I must confess, I haven’t read the Little House on the Prairie books since the early 80s and much of my Little House memories are based on the TV show. I know from reading The Wilder Life by Wendy McClure that at one point in time, the ‘Little House’ books were known as the Mary & Laura books, but the popularity of Melissa Gilbert as Laura totally overshadowed Mary. Of course it did! Mary, as the eldest, predictably gets the shaft. Which is ridiculous because Mary’s the one who gets Scarlet Fever and Mary’s the one who goes blind and Mary’s the one who loses her baby in the Blind School fire. . . oh wait, that’s the TV show again. But damn, that was some good TV.

I’m sure there are about 1000 other siblings I could have included (Steven Wakefield, Jem Finch), but I will stop now and let you all make the case for other, overlooked eldest siblings in the comments.