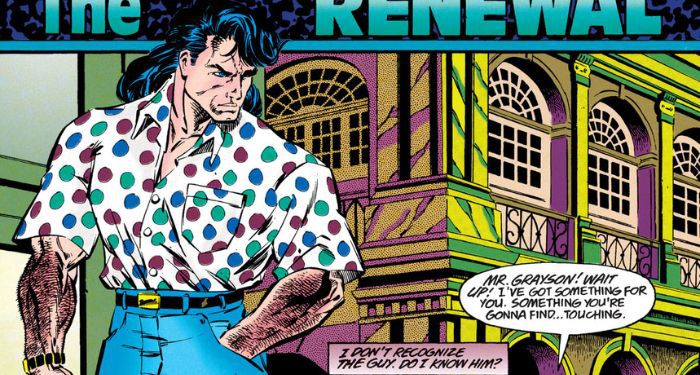 A few months back, my fellow Rioter Eileen Gonzalez wrote an article called “Iron Man Is the Worst-Dressed Superhero and I Can Prove It.” I respect Eileen deeply, and so it is with a heavy heart that I am obligated to point out just how very wrong she is. Tony Stark is a wretched dresser, of course. But Nightwing, AKA Dick Grayson, AKA the original Robin, is the worst dresser in comics. And I have the receipts.

Now, like Eileen, I’m only focusing on Dick’s civilian fashion sense, as his early sartorial efforts as Nightwing have already been thoroughly dunked on (including by me). Like Tony, Dick has enough money to afford to dress well. And yet he reaches into his closet every morning and chooses violence.

Dick spent most of the Golden and Silver Age wearing pretty much the same red sweater over a white collared shirt, and I have no complaints there. It’s only when he hit adolescence and started hanging out with his friends that things got…concerning. Like, here’s what the Titans chose to wear when they found out about hippies in Teen Titans #15:

That’s Dick on the left, followed by Kid Flash, Wonder Girl, and Aqualad. Now, these are costumes for blending in undercover (uh…good luck), but it’s still an indication that once freed from the confines of his red sweater, Dick might not quite know what to do with himself.

Sure enough, when Dick needs to wear a suit in New Teen Titans #26, he’s still leaning on those Robin colors for help. Can you imagine seeing a guy in a bright green three-piece suit and red tie and he’s not working at Santa’s kiosk at the mall? And we haven’t even gotten started yet!

Dick’s a little more relaxed when it comes to working out a couple issues later, in that he apparently wears hot pink briefs and little matching slippers. Hey, if you got it, flaunt it. (And he does: Dick spends much of New Teen Titans in a Speedo. Thank you, George Perez.)

But the ’90s was really Dick’s time to shine. And by “shine,” I mean he still apparently hears the words “civilian disguise” and absolutely panics:

Yes, that’s Dick, who wore this particular wig + mustache combo on multiple occasions. Starfire is such a forgiving girlfriend.

Sometimes, though, he went out as himself…and when he did, he wore a hideously patterned blazer two sizes too big and a little rattail. Also, what is going on with that shirt?

Then I guess he got really into grunge? Honestly it’s the dress shoes (I think?) that really make and/or ruin this outfit for me. Business on the toes, party on the clothes.

How many pairs of shorts at a time is too many? Asking for a friend (the friend is Dick).

And then, of course, there is the most infamous Nightwing outfit of all, from his first solo miniseries:

Dick doesn’t want anyone to forget he was raised in the circus, and he’s succeeding at that goal. I’ll give him this: the mullet is, you know, a mullet, but it’s extremely lustrous. However, I think it’s important that you all know that literally like a page later he manages to do this to it:

I know I said I wouldn’t talk about costumes, but hair is fair game! Apparently when it compresses in volume it grows in length? Although sometimes it’s shorter than it’s shown here, so maybe it’s retractable. I don’t want to think about this anymore.

Finally, I’d like to present little feature I like to call “Don’t Invite Dick Grayson to Your Wedding Because He Will Look Ridiculous and Also Either the Wedding or Subsequent Marriage Will Inevitably Go Horribly Awry”:

Here he is giving Donna Troy away at her wedding. It’s a sweet moment, even though Donna’s groom is an awful person who she eventually divorced. But those ruffled cuffs are something.

This is the best tux Dick has ever worn to a wedding but the mullet is at its most unforgivable. (Also like three pages later an evil Raven attacks the wedding and incinerates the minister with hellfire.)

The mullet was “better” and the tux was much worse at Dick’s second wedding…to a woman he was trying to prove had murdered her previous husbands. Shockingly, this marriage didn’t end well, either.

And finally, we get a one-two punch for Dick’s turn as Wally West’s best man: we have both a hideous wedding look and a panicky civilian disguise! Not to mention being four for four with disastrous weddings after an evil wizard makes everyone forget the bride ever existed. (Don’t worry, Wally eventually found her again and he and Linda are still going strong. Love wins! For people other than Dick Grayson, at least!)

I wanted to close out with an example of a recent, widely hated development in Dick’s life: that time he got shot in the head, got amnesia, and started calling himself “Ric Grayson.” Unfortunately (fortunately), he was drawn by Travis Moore for a lot of this time and he looks incredible:

Hm. So when Dick doesn’t remember who he is, he looks great? I never thought I’d say we should bring back Ric Grayson, but it might be the only way we can save Dick from himself. DC, you know what to do.