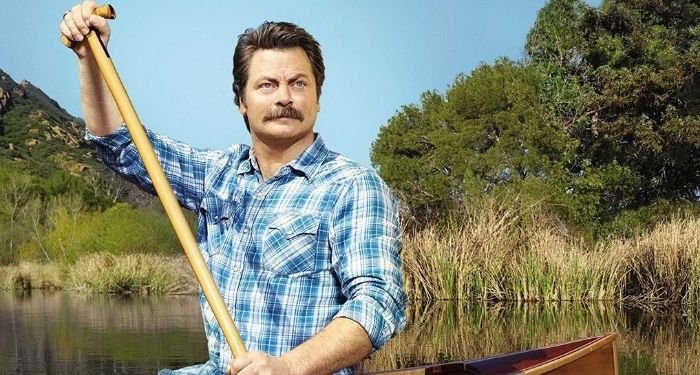 I think most people know Nick Offerman as Ron Swanson from Parks and Rec. His role as the hyper-masculine, woodworking enthusiast, and silence-loving director of the Parks and Rec department cemented his place in my, and the world’s, heart forever.

And the actor himself doesn’t seem to be different from the character he plays. Which is partially true. He does woodwork in real life. (I adore him on his and Amy Poehler’s show, Making It!) He loves the outdoors and is passionate about the world we live in. And, he’s also the owner of the best giggle in the universe. Hands down.

Which made me wonder, as a perpetual homebody and bookworm, what kind of books does Nick Offerman? And, would I like them?

After doing some digging, it turns out he has quite a few book recommendations to explore. Many of his recommendations are from American novelist, poet, and farmer Wendell Berry. Offerman, a self-professed “compulsive reader and full-time hillbilly” as a child, talks often of Berry. He often cites his ability to capture the beauty of the world, the value of a hard day’s work, and a love for people.

So, I decided to start with The Memory of Old Jack to get a feel for Offerman’s taste. Set in 1952, the novel centers on “Old” Jack Beechum as he wanders through the memories of life. We get introduced to his family, his neighbors, his wins and his losses. It is a tale of great tragedy, at times, and melancholy, but also great beauty.

Jack’s story talks often of the value and delight in a day’s work. Of the gratitude he feels for a gentle moment. For working side by side with someone. For the sun’s touch. A “willingness to live within the limits of his own fate.” The melancholy of an old house. The way the world, in spring, “dressed itself in green.” In such simple terms, Berry captures the truth of the world and, by extension, how beautiful it is. Our lives and the world and the people we love.

There’s a gentleness to the novel that I wasn’t expecting. A gentleness to Jack. Maybe this is a step too far, but in my mind, a gentleness to Offerman as well. I was struck by how applicable and how comforting the novel was. It spoke to how I feel every day. It calmed an itchiness in me when I want and want and want without looking around at the world and my place and the people I have right now. We live in a multi-tasking, on-the-go-always state of life. This book said, very gently, to slow down.

The second book I picked up was The Tenth of December by George Saunders. Part of Offerman’s own book Where the Deer and the Antelope Play: The Pastoral Observations of One Ignorant American Who Loves to Walk Outside documents an adventure through Glacier National Park he and Saunders took alongside musician Jeff Tweedy.

Offerman recommends Saunders for his “hilarious and incisive” writing. He says The Tenth of December should be read twice to really catch how interconnected the book of short stories is. I am not a rereader myself, but I found my first read-through a delight. While fairly different in tone than Old Jack, these short stories were so precise and sharp, I was wowed. Despite the collection brimming with made-up worlds and oddball characters, their inner lives were recognizable in ways hard to explain. Jealousy and isolation, consequences and actions, are all documented on the page in a way that was relatable while still holding my attention by their bizarreness.

There were poles in front yards dressed up like Uncle Sam and science experiments gone wrong and an alarming number of limps across the collection. They were also hilarious. Not so much in a laugh-out-loud sort of way, but an “oh wait, that situation is funny because it’s so true” kind of way. In a whip-smart and honest sort of way. I dug it. A lot.

Many of Offerman’s other recommendations are nonfiction titles, too. They advocate for the art of crafting and woodworking, like The Soul of a Tree and Why We Make Things and Why It Matters and The Lost Carving. For getting out into the world around us (and saving it too) with recommendations like Garbage Land: On the Secret Trail of Trash and The Omnivore’s Dilemma. And also lots of biographies. Of adventurers, of powerful men, and everyone in between.

He cites his wife as being a big influence on what he reads in terms of contemporary writing, recommending Big Little Lies and The Girl on the Train among many others in his NYT By the Book article.

All in all, his taste is both expected and unexpected. He seeks beauty in the world and the books he reads capture that in ways I was surprised by. That sort of recognition when a writer puts into words the way something has felt to you your whole life. There was a gentleness to these that I found comforting. It makes me feel like picking Offerman’s brain would be the same as sitting by a campfire with a warm drink in my hands or something. I want to find a park and climb a tree…or at the very least lie beneath one while reading.

I’m a fan, is what I’m trying to say. I’m a definite fan. And while someone’s taste doesn’t necessary reflect their reality (I read a slew of horror novels for someone who’s 100% a goody-two-shoes in reality), I think his advocacy for nature and the world speaks to who he is as a person.

Don’t meet your heroes, but maybe read their favorite books. You might learn a bit more about them.

Interested in more book recommendations by famous faces? Try these 15 books recommended by celebrities in 2021! Or maybe you want to learn more about the man himself? Check out this list of 28 things we learned about Nick Offerman from his book Paddle Your Own Canoe.