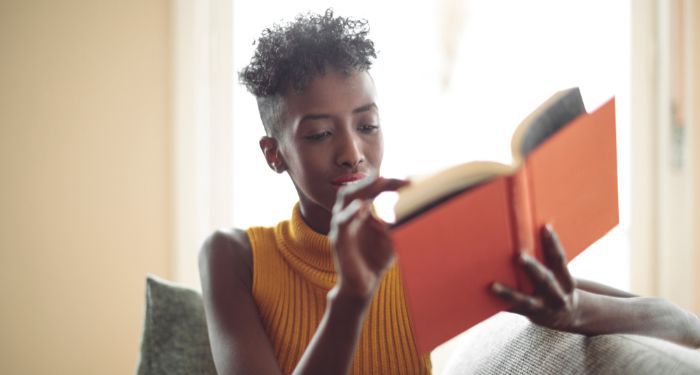 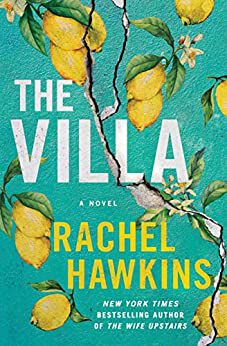 The Villa by Rachel Hawkins

As kids, Emily and Chess were inseparable. But by their 30s, their bond has been strained by the demands of their adult lives. So when Chess suggests a girls trip to Italy, Emily jumps at the chance to reconnect with her best friend.

Villa Aestas in Orvieto is a high-end holiday home now, but in 1974, it was known as Villa Rosato, and rented for the summer by a notorious rock star, Noel Gordon. In an attempt to reignite his creative spark, Noel invites up-and-coming musician, Pierce Sheldon to join him, as well as Pierce’s girlfriend, Mari, and her stepsister, Lara. But he also sets in motion a chain of events that leads to Mari writing one of the greatest horror novels of all time, Lara composing a platinum album — and ends in Pierce’s brutal murder.

As Emily digs into the villa’s complicated history, she begins to think there might be more to the story of that fateful summer in 1974. That perhaps Pierce’s murder wasn’t just a tale of sex, drugs, and rock & roll gone wrong, but that something more sinister might have occurred — and that there might be clues hidden in the now-iconic works that Mari and Lara left behind.

Yet the closer that Emily gets to the truth, the more tension she feels developing between her and Chess. As secrets from the past come to light, equally dangerous betrayals from the present also emerge — and it begins to look like the villa will claim another victim before the summer ends.

Inspired by Fleetwood Mac, the Manson murders, and the infamous summer Percy and Mary Shelley spent with Lord Byron at a Lake Geneva castle — the birthplace of Frankenstein — The Villa welcomes you into its deadly legacy.

Reasons to read it: An inspired-by list that places the good sis Stevie Nicks next to the Manson Murders and Mary Shelley’s creation is…unexpected to say the least. But how Hawkins weaves together that combination, plus the gothic aspect, make this an intriguing thriller to pick up. And folksx who like reading about words will appreciate the importance placed on writing in this book. If you’ve liked other Hawkins books, you’re bound to like this one. 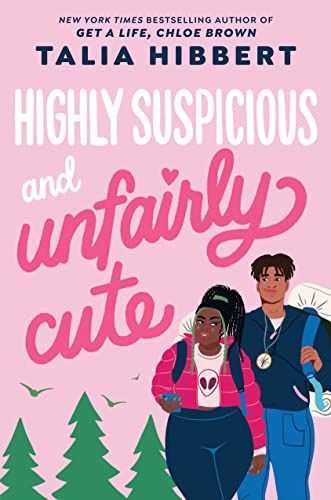 From The New York Times best-selling author of the Brown Sisters trilogy, comes a laugh-out-loud story about a quirky content creator and a clean-cut athlete testing their abilities to survive the great outdoors — and each other.

Bradley Graeme is pretty much perfect. He’s a star football player, manages his OCD well (enough), and comes out on top in all his classes…except the ones he shares with his ex-best friend, Celine.

Celine Bangura is conspiracy-theory-obsessed. Social media followers eat up her takes on everything from UFOs to holiday overconsumption — yet, she’s still not cool enough for the popular kids’ table. Which is why Brad abandoned her for the in-crowd years ago. (At least, that’s how Celine sees it.)

These days, there’s nothing between them other than petty insults and academic rivalry. So when Celine signs up for a survival course in the woods, she’s surprised to find Brad right beside her.

Forced to work as a team for the chance to win a grand prize, these two teens must trudge through not just mud and dirt but their messy past. And as this adventure brings them closer together, they begin to remember the good bits of their history. But has too much time passed…or just enough to spark a whole new kind of relationship?

Reasons to read it: I loved, loved, loved Hibbert’s Brown Sisters trilogy, and have been anxiously awaiting their YA debut. This book, as is the case with Hibbert’s other books, is refreshing in its portrayal of mental health struggles, body diversity, and interesting main characters. Not to mention the *growth*! Their characters always experience personal growth that feels fitting for them. Between the banter, fun characters, and their chemistry, I’m sure this will convert you into a Hibbert-lover forever. 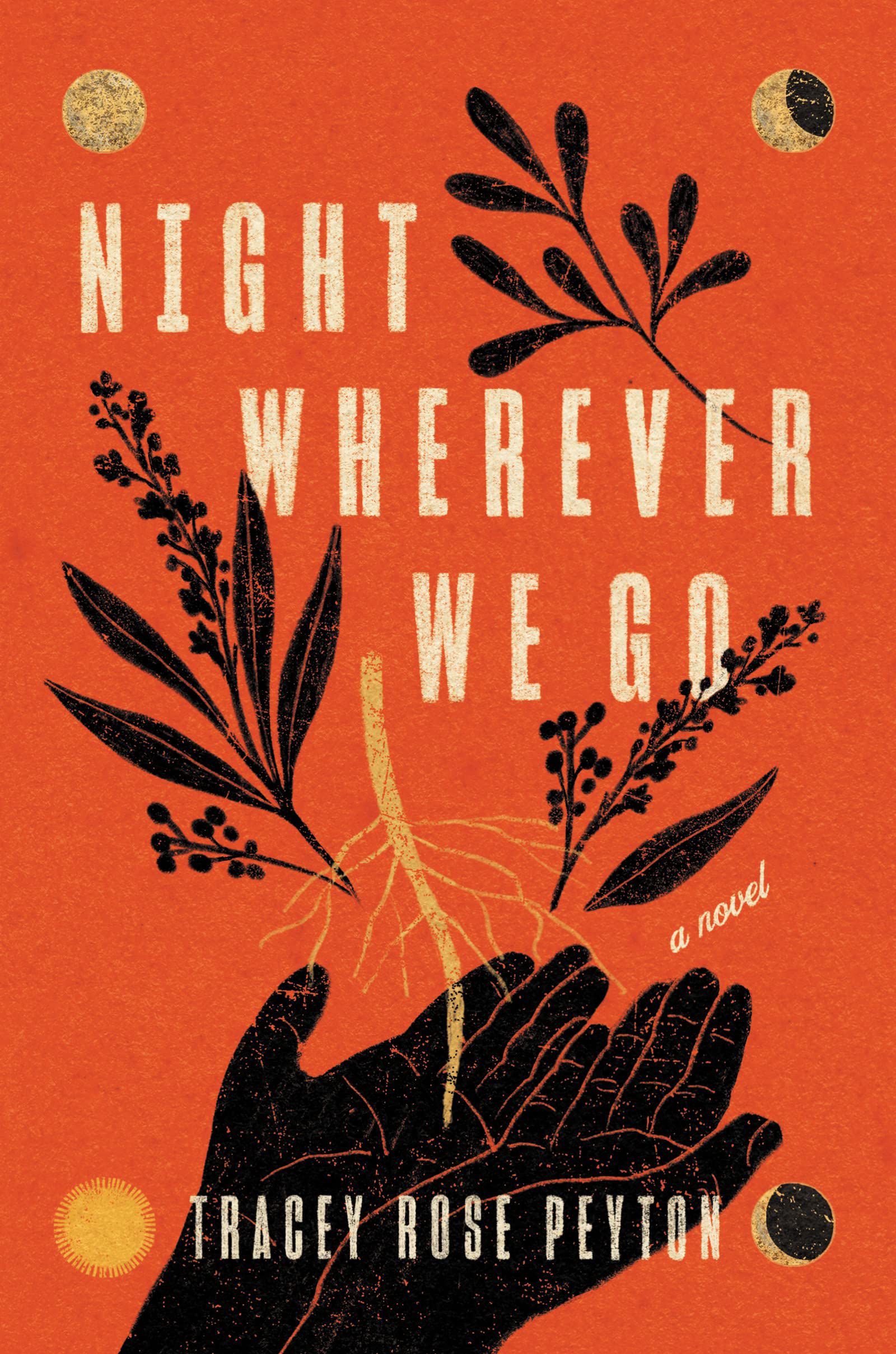 Night Wherever We Go by Tracey Rose Peyton

A gripping, radically intimate debut novel about a group of enslaved women staging a covert rebellion against their owners.

On a struggling Texas plantation, six enslaved women slip from their sleeping quarters and gather in the woods under the cover of night. The Lucys — as they call the plantation owners, after Lucifer himself — have decided to turn around the farm’s bleak financial prospects by making the women bear children. They have hired a “stockman” to impregnate them. But the women are determined to protect themselves.

Now each of the six faces a choice. Nan, the doctoring woman, has brought a sack of cotton root clippings that can stave off children when chewed daily. If they all take part, the Lucys may give up and send the stockman away. But a pregnancy for any of them will only encourage the Lucys further. And should their plan be discovered, the consequences will be severe.

Visceral and arresting, Night Wherever We Go illuminates each woman’s individual trials and desires while painting a subversive portrait of collective defiance. Unflinching in her portrayal of America’s gravest injustices, while also deeply attentive to the transcendence, love, and solidarity of women whose interior lives have been underexplored, Tracey Rose Peyton creates a story of unforgettable power.

Reasons to read it: The last paragraph of the official book blurb encapsulates what attracted me to this book. It takes a lot for me to want to read about slavery, as I prefer my books to have more Black joy in them, but Night Wherever We Go shows the joy Black women experienced. It shows the pain and struggle, too, of course, but a lot of the story is focused on the bonds formed between the main characters and how enriching they were. We need more stories that show the inner lives of Black Americans of the past. 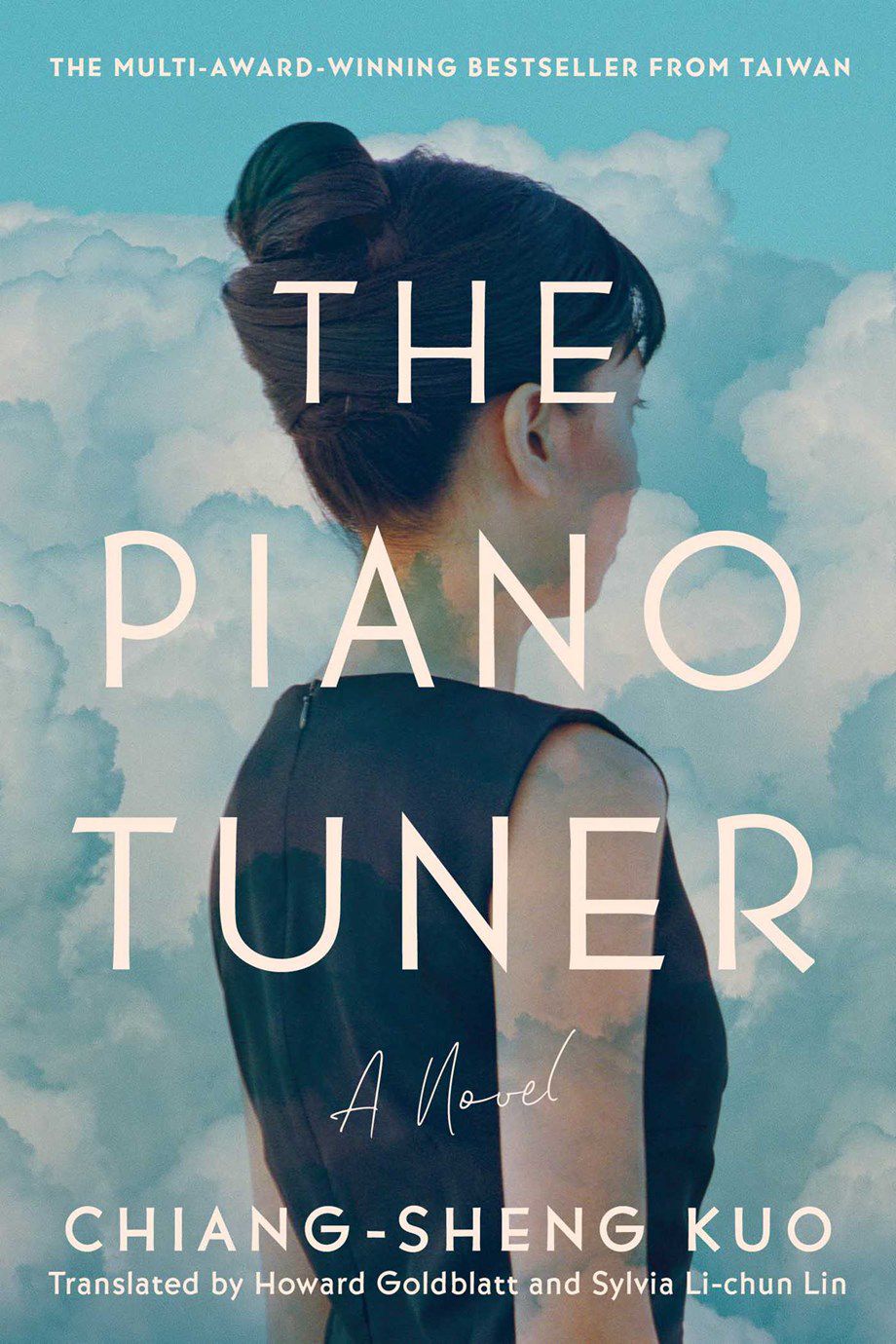 A widower grieving for his young wife. A piano tuner concealing a lifetime of secrets. An out-of-tune Steinway piano. A journey of self-discovery across time and continents, from a dark apartment in Taipei’s red-light district to snow-clad New York.

At the heart of the story is the nameless narrator, the piano tuner. In his forties, he is balding and ugly, a loser by any standard. But he was once a musical prodigy. What betrayal and what heartbreak made him walk away from greatness?

Long hailed in Taiwan as a “writer’s writer,” Chiang-Sheng Kuo delivers a stunningly powerful, compact novel in The Piano Tuner. It’s a book of sounds: both of music and of the heart, from Rachmaninoff to Schubert, from Glenn Gould to Sviatoslav Richter, from untapped potential to unrequited love. With a cadence and precision that bring to mind Thomas Mann’s Death in Venice, Kazuo Ishiguro’s Nocturnes, and Yasunari Kawabata’s Snow Country, this short novel may be a portrait of the artist as a “failure,” but it also describes a pursuit of the ultimate beauty in music and in love.

Reasons to read it: I came across an explanation of how some of the title’s original meaning got lost in translation: the original Chinese title is “Seeker of Pianos,” with the second character having the double meaning of “piano”/”love.” The potential Seeker of Pianos/Seeker of Love double meaning sets up a story in which lyrical depictions of music are interwoven with how love shapes us. 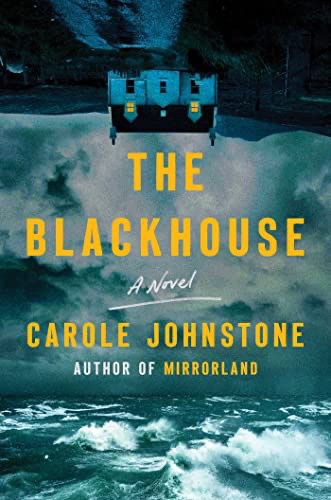 The Blackhouse by Carole Johnstone

A remote village. A deadly secret. An outsider who knows the truth.

Robert Reid moved his family to Scotland’s Outer Hebrides in the 1990s, driven by hope, craving safety and community, and hiding a terrible secret. But despite his best efforts to fit in, Robert is always seen as an outsider. And as the legendary and violent Hebridean storms rage around him, he begins to unravel, believing his fate on the remote island of Kilmeray cannot be escaped.

For her entire life, Maggie MacKay has sensed something was wrong with her. When Maggie was five years old, she announced that a man on Kilmeray — a place she’d never visited — had been murdered. Her unfounded claim drew media attention and turned the locals against each other, creating rifts that never mended.

Nearly 20 years later, Maggie is determined to find out what really happened, and what the islanders are hiding. But when she begins to receive ominous threats, Maggie is forced to consider how much she is willing to risk to discover the horrifying truth.

Reasons to read it: This slow-burning story features a host of characters within an atmospheric setting, which — from the raging sea to the blackhouse — feels like a living character itself. Altogether, this is a uniquely claustrophobic and disconcerting tale with notes of otherworldliness. 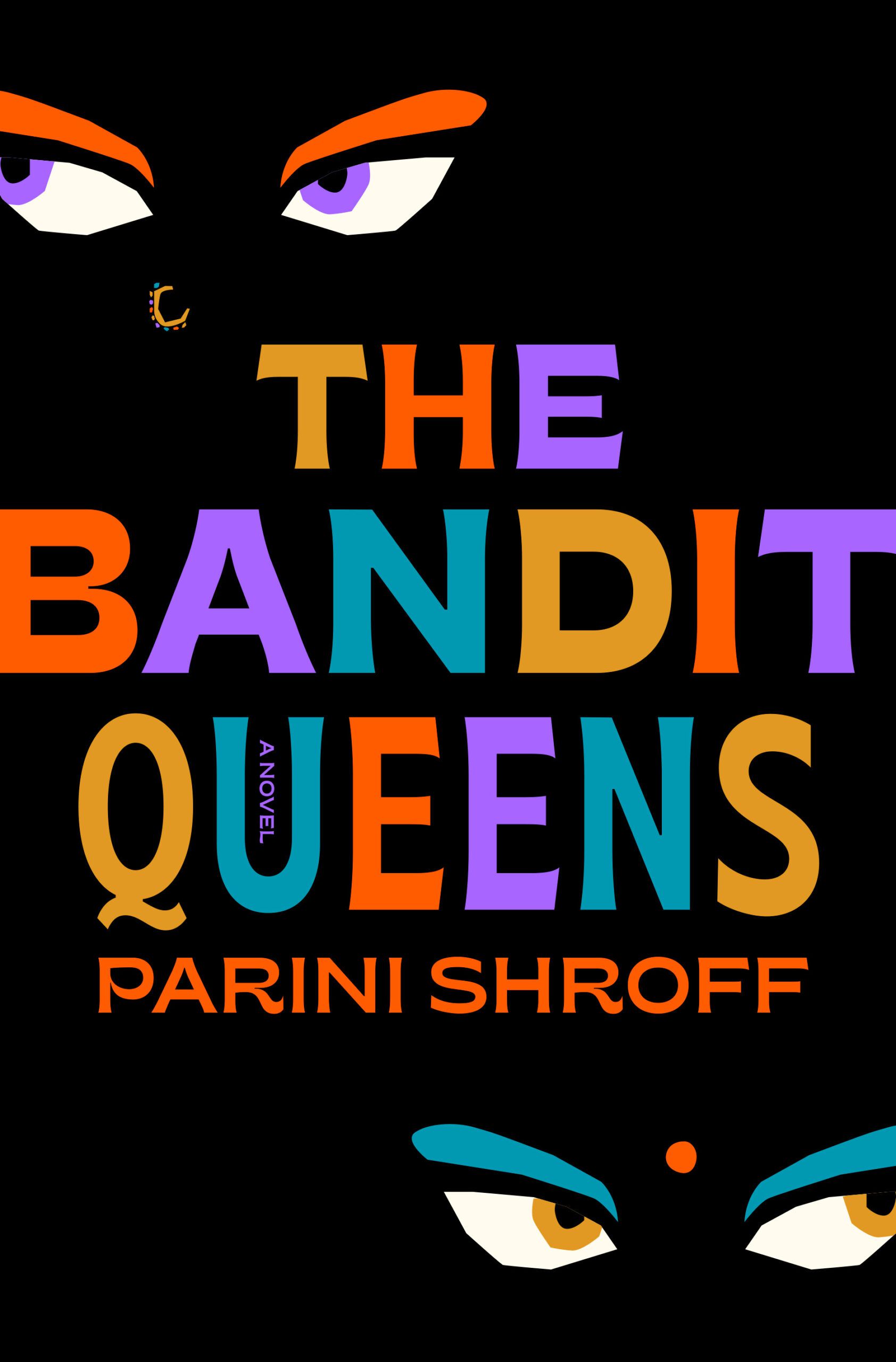 The Bandit Queens by Parini Shroff

A young Indian woman finds the false rumors that she killed her husband surprisingly useful — until other women in the village start asking for her help getting rid of their own husbands — in this razor-sharp debut.

“Shroff captures the complexity of female friendship with acuity, wit, and a certain kind of magic irreverence. . . . The Bandit Queens is tender, unpredictable, and brimming with laugh-out-loud moments.” — Téa Obreht, The New York Times best-selling author of The Tiger’s Wife

Five years ago, Geeta lost her no-good husband. As in, she actually lost him — he walked out on her and she has no idea where he is. But in her remote village in India, rumor has it that Geeta killed him. And it’s a rumor that just won’t die.

It turns out that being known as a “self-made” widow comes with some perks. No one messes with her, harasses her, or tries to control (ahem, marry) her. It’s even been good for business; no one dares to not buy her jewelry.

Freedom must look good on Geeta, because now other women are asking for her“expertise,” making her an unwitting consultant for husband disposal.

And not all of them are asking nicely.

With Geeta’s dangerous reputation becoming a double-edged sword, she has to find a way to protect the life she’s built — but even the best-laid plans of would-be widows tend to go awry. What happens next sets in motion a chain of events that will change everything, not just for Geeta, but for all the women in their village.

Filled with clever criminals, second chances, and wry and witty women, Parini Shroff’s The Bandit Queens is a razor-sharp debut of humor and heart that readers won’t soon forget.

Reasons to read it: This book is expectantly funny, but it also tackles things like the pursuit of freedom from abuse. The characters are well thought out, and there’s great female friendship, but don’t get it twisted, this book is definitely for when you’re in an extra kind of mood, which, I’m obviously usually in.