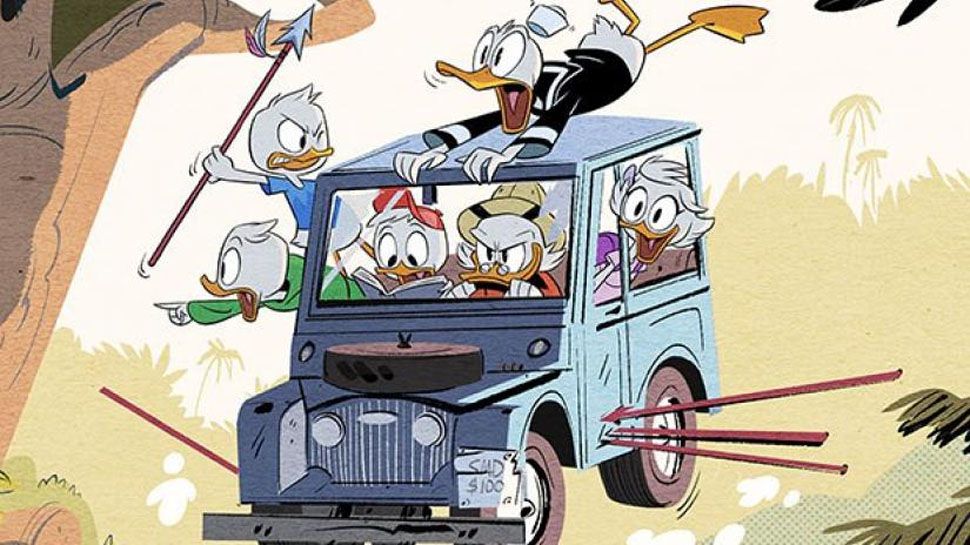 Have you been watching the new DuckTales? The Disney Channel’s reboot of the beloved 1987 series is clearly a labor of love for the entire creative team. From the hilarious pilot to the full-throttle and deeply emotional season finale, it’s done a phenomenal job of balancing humor with heart and new myth-making with Easter eggs for longtime fans. This particular cartoon duck aficionado is very pleased indeed.

Of course, it’s far from perfect. There’s still only one girl (Webby) and one adult woman (Mrs. Beakley) out of a core cast of seven. Moreover, DuckTales has an awkward legacy to build on. Yes, it’s inspired by the show that revolutionized what after-school cartoons could be, as well as by some of the most masterful adventure comics ever printed. But it’s also inspired by a long tradition of imperialist pulp fiction and all the racist stereotyping that comes along with it.

When talking about Disney ducks, all roads lead back to Carl Barks. Barks worked in the Disney studio as an “in-betweener” and storyboard artist before co-writing and drawing the very first full-length Donald Duck comic, 1942’s Donald Duck Finds Pirate Gold. Thus began three decades of writing and drawing duck comics, back when there was actually a market for such things in the States. In 1947 Barks created Scrooge McDuck; over the years he additionally gave us Duckburg, Gyro Gearloose, Magica DeSpell, Flintheart Glomgold, the Beagle Boys, Gladstone Gander, the Junior Woodchucks, and more.

And Barks was unquestionably a genius. His swashbuckling, madcap adventures are as compulsively readable now as they were seventy years ago, and have inspired generations of artists in multiple industries. (That giant stone ball deathtrap in Raiders of the Lost Ark? Yeah, that’s from Barks’s 1954 Uncle Scrooge story, “The Seven Cities of Cibola.”)

But Barks also drew on the pulp stories he’d been raised on. And as funny as his gags are, as complex as his Scrooge is, he also filled his pages with stories of heroic white-coded Americans systematically looting other cultures of priceless treasures, and countless drawings of ethnic stereotypes. Over and over again, Barks’s ducks run afoul of “natives” decked out in every cartoonish shorthand imaginable (grass skirts, bones, animal prints, you know the drill) who they alternately swindle, wow with their Western savvy and technology, or escape being eaten by.

This has long been a problem for creators who want to use those characters, or for publishers reprinting those stories. For example, 1949’s “Voodoo Hoodoo” reveals that in his younger days, Scrooge hired thugs to force a nonspecific African “tribe” off their ancestral land so that he could build a rubber plantation there. (This is a very early Scrooge appearance, hence the out-of-character criminality. Still.) In response, the tribe’s “witch doctor,” Foola Zoola, sets a zombie named Bombie (yes, really) on Scrooge’s trail. Here’s what Foola Zoola looked like originally: 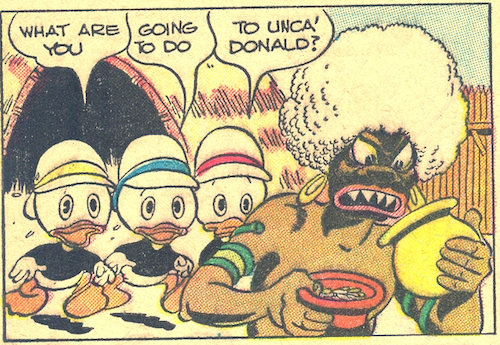 Here’s how he looked in reprints up through the late ’80s (typically referred to as “censored” versions, even though that’s not actually what’s happening here): 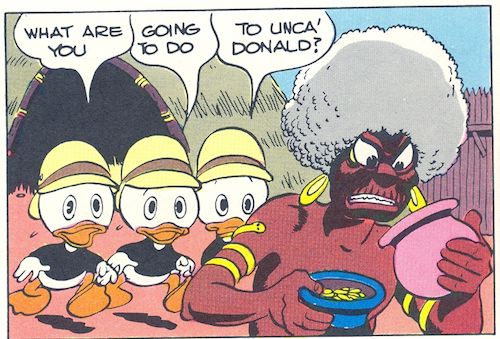 Weird how no one ever refers to the recoloring of the nephews’ hats as “censorship.” Hmmmm.

And here’s how he looks in the Eisner-winning The Life and Times of Scrooge McDuck by Barks scholar and mega-fan Don Rosa. Rosa chose to retain the filed teeth for the menacing quality while removing the caricatured nose and lips:

It’s still really racist, but at least Scrooge is SUPPOSED to be seen as the bad guy here?

We can split hairs all day over which offensive features should be retained or dropped (and probably that’s not a decision that white creators or critics should be making at all), but the fact remains that this character has been elevated as an important figure in Scrooge’s history and featured in an Eisner-winning comic with multiple 21st century printings and editions. And this is the subtext that lies beneath DuckTales’s all-ages family hijinks.

See, because Barks was so influential, the globetrotting, treasure-hunting template he set for Scrooge & Co. persists to this day—in the few Disney comics published in English, in the many, many Disney comics published in places like Italy, the Netherlands, and Brazil (in tiny Finland, their Donald Duck book, Aku Ankka, has a weekly circulation of over 600,000—three times the size of a really gangbusters superhero #1 in the U.S.), and in both iterations of DuckTales. Revisiting the 1987 series can be a jarring experience for ’80s and ’90s kids who remember it through rose-colored glasses. Though the stereotyping isn’t as vicious as it was in ’40s and ’50s comics, it’s still there—complete with lots of over-the-top “ethnic” accents delivered by mostly white voice actors.

While I can’t speak to how Uncle Scrooge and DuckTales’s racist, imperialist legacies are handled in international traditions, an American comic did try to address it. Back in 2011, Boom! Studios published a short-lived run by Warren Spector and an assortment of artists. It included an arc called “Rightful Owners” in which Scrooge realizes that he should return the various treasures he’s purchased or pilfered to their home countries. It was a nice thought, but fell down in execution: the first culture he attempts to return an artifact to tells him to hold on to it since he can protect it better than they can, and the plot line then gets distracted by outwitting Scrooge’s rival John D. Rockerduck instead of making reparations. So actually, it was a story about Scrooge and family being praised as allies without actually having to give anything up. Hmm. 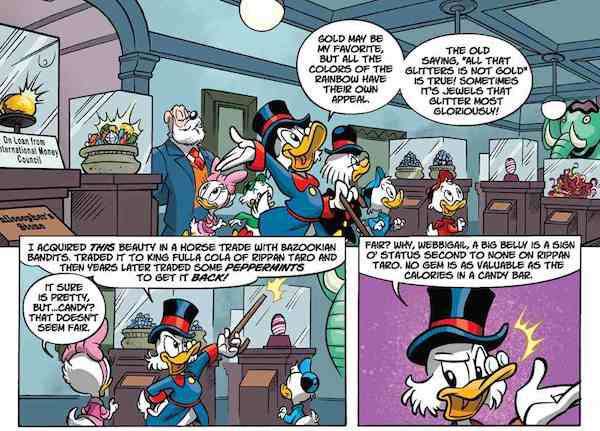 Webby starts to realize her beloved adoptive uncle is a robber baron in “Rightful Owners.”

The new TV show has by and large steered clear of the colonialist tropes that used to be its stock in trade, in a way that makes it clear that the creators are being thoughtful about race. Characters coded as particular ethnicities are played by voice actors from analogous backgrounds (B.D. Wong as Toad Liu Hai, Bassem Youssef and Cree Summer as Egyptians Toth-Ra and Amunet, an all-Greek cast of ancient Greek gods, Jaime Camil as Don Karnage). Fenton “Gizmoduck” Crackshell, now voiced by Lin-Manuel Miranda, has not only had a name change to Fenton Crackshell-Cabrera, but his feathers are now brown instead of white, and he and his mother speak a mixture of English and untranslated Spanish to one another. (The second Gizmoduck episode even showed him dealing with microaggressions from the insufferable new villain Mark Beaks.)

That said, fewer adventures among unenlightened natives doesn’t mean none—the episode in Egypt involves teaching a pharaoh’s servants about modern concepts like democracy and Tex Mex. And I’m sorry to tell you that the Toad Liu Hai mentioned above is a sinister and greedy mystical kidnapper who looks like this: 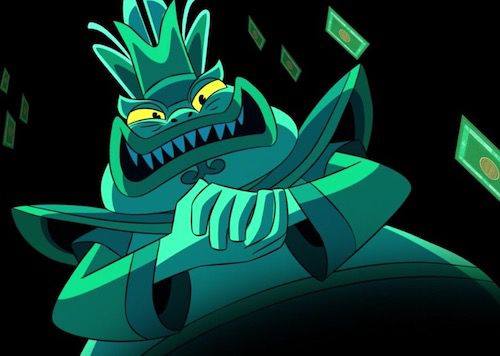 Meanwhile, there’s a new comic, too, from IDW. It’s been largely mediocre, with some issues that seem like they’ve been run through Babelfish a few too many times, but the issue that really put me off was #3—specifically a story called “Beware of the Phenomenal Pumpkin People!” by Joey Cavalieri, Graziano Barbaro, Andrea Greppi, and Roberta Zanotta. In this flashback tale, Scrooge, Donald, and Donald’s twin Della (the triplets’ long-lost mother) crash land in the Amazon, where they discover a community of miniature pandas who live in a patch of strangely colored pumpkins. They promptly make Donald their king, mostly to fight the monsters who keep invading their village. Luckily for Donald, it turns out that the monsters are only pandas who’ve eaten purple pumpkins, and eating pink pumpkins turns them back into pandas.

This has all the bad tropes and then some. The pandas are helpless and voiceless—they speak in an unreadable font that only Scrooge can translate. They immediately embrace Donald as their literal white savior, and even though everything in their culture revolves around these pumpkins, from food to clothing to architecture, they need the arrival of three Scottish American strangers to explain how the very substance that is the center of their lives works. Don’t forget Scrooge and Della patronizingly scolding them like children for eating the wrong kind of pumpkins! 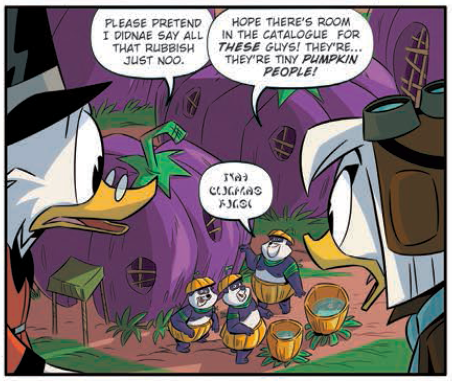 There seems to have been an attempt to randomize the elements in this story to avoid racist tropes by placing pandas (usually coded as Chinese in funny animal stories, for obvious reasons) and pumpkins in the Amazon, but the underlying tropes are just as recognizable here as they are in Narnia or Pandora or any other fantastical setting. And they’re just as unacceptable.

Too often the racist aspects of Barks’s work are dismissed with “Well, it was the times, and anyway he was a genius.” Even the commentary from Donaldist scholars (it’s a thing) in Fantagraphics’s otherwise flawless reproductions of Barks’s work tends to hand wave its flaws. But that work is still being used as the basis for a TV show and hundreds of comics a year, and part of the work involved in using an old and sometimes problematic IP is being thoughtful about the issues that may have been present in the past. That’s doubly true when your audience is composed primarily of kids.

I believe that the current DuckTales crew is trying their damnedest to reconcile a love of the old show and even older Barks stories with creating an anti-racist, inclusive show that isn’t harmful to any of the kids in their audience no matter what their background is. I applaud the progress they’ve made, and hope to see it continue (particularly by further diversifying the writing and character design staff).

But they have a ways to go, and that progress needs to extend to IDW and the comic book creators as well. No, the audience isn’t as big, but as we’ve seen, a comic book can have a long reach. And DuckTales, whether animated or printed, should be for everyone.