Comics anthologies don’t get nearly as much attention as they should. There are many reasons they tend to remain lower profile: non-traditional funding and publishing routes, indie publishers, and less well-known (but no less talented) creators mean local shops and larger online retailers either don’t push the titles or don’t carry them. Original characters mean casual readers aren’t immediately drawn to them by familiarity. And some readers are concerned that confining writers and artists to a single topic or concept will result in a bunch of stories that are too much alike to stay interesting.

Here’s the thing: the internet gives us direct access to publishers. If you read an indie or small-publisher comic you like, sign up for their newsletter. You’ll stay informed about what they’re working on and also, it’s nice to occasionally get email that isn’t spam. A lot of indie comics publishers have their own shops, so if they put out an anthology you want you can order it directly from them; if they don’t, your LCS or a local bookshop can special order. It might take a minute to get there, but don’t pretend you don’t have a TBR to work on while you wait.

As to the OC issue: look, it’s not cheating on your favorite IP fam to start seeing other characters. After all, if you go back far enough, they were OCs too. Making new friend doesn’t mean breaking up with the old ones, it just means a bigger stable of comfort characters to reach out for when the real world sucks.

And the theme…well, I’ve watched two authors write 15 stories from one theme, so imagine what 10 can do. You can just throw that concern right in the trash and marvel at the wonder of the human brain and its ability to lie professionally in multiple languages about complex psychological concepts without blinking.

So, now that I’ve sold you on anthologies, let me recommend a few. 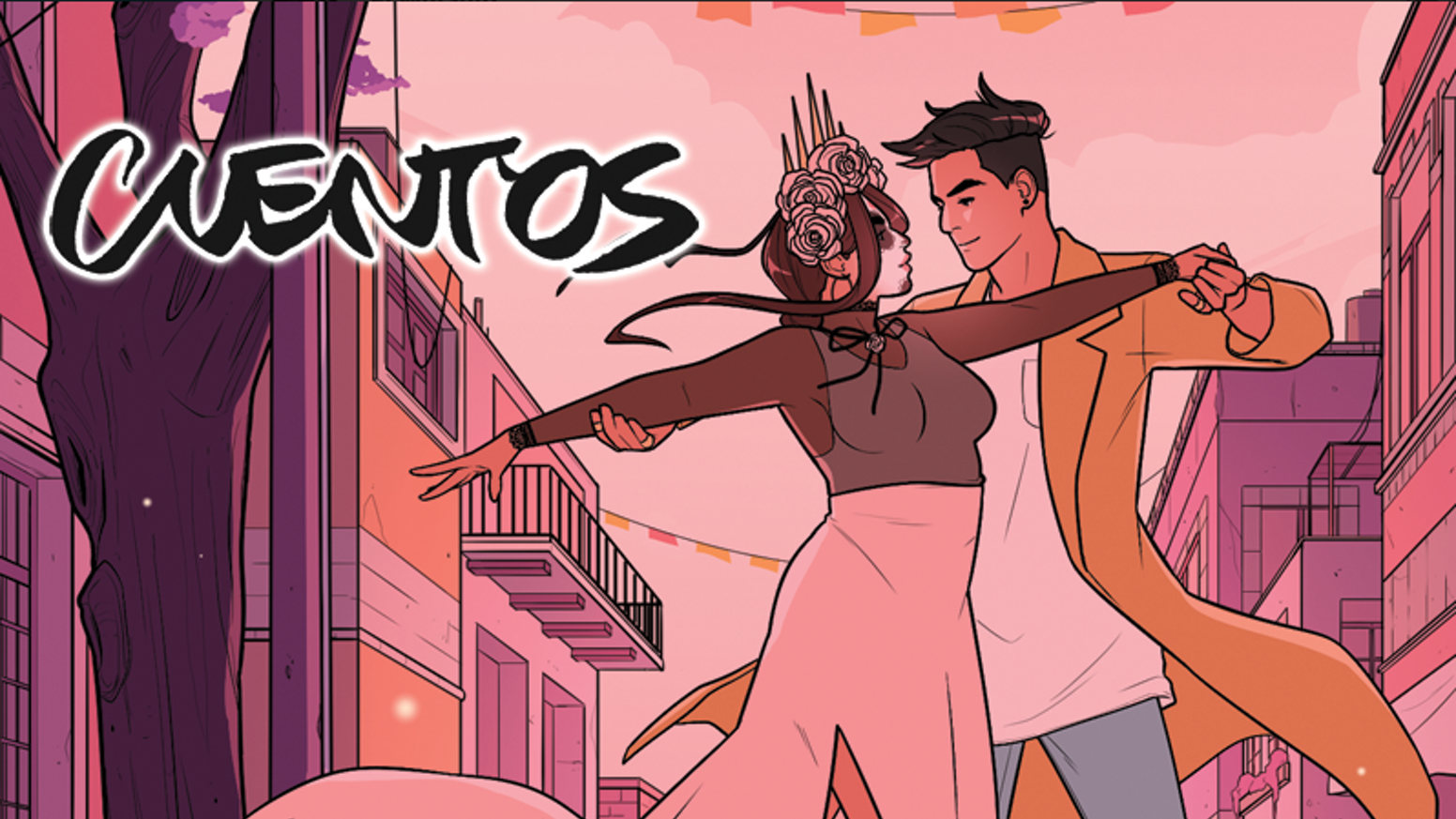 Cuentos was a Kickstarter project that had me at bilingual, Latinx+, and mythology. The stories and art featured in the anthology are all drawn from various Mexican, South American, and Caribbean cultures, a gorgeous combination of indigenous lore, urban legends, macabre monster stories, and the fantastic. Though it’s rare in western comics for the writer to also do the art, the Cuentos creators pulled double duty (with one exception) and having the opportunity to see the same vision executed in two different media by the same person is a really amazing experience (especially for a writer who cannot draw to save her own life), to spot the curves of a drawing in a turn of phrase or the shadows described lurking around a stairwell in one passage reaching clammy tendrils out from the illustration.

I also love that Cuentos has not only the stories and comics but also the creator biographies in both Spanish and English (My Spanish is rusty; I did need English version help in a few places). Making the entire volume bilingual rather than some entries in English and some in Spanish makes the non–Spanish speaking reader feel as though they’re being given the very special gift of a translation; these aren’t our stories and we’ve done nothing to deserve them. They’re being shared as a kindness and we need to appreciate the spirit with which they’re being offered and pass them along with the same love. 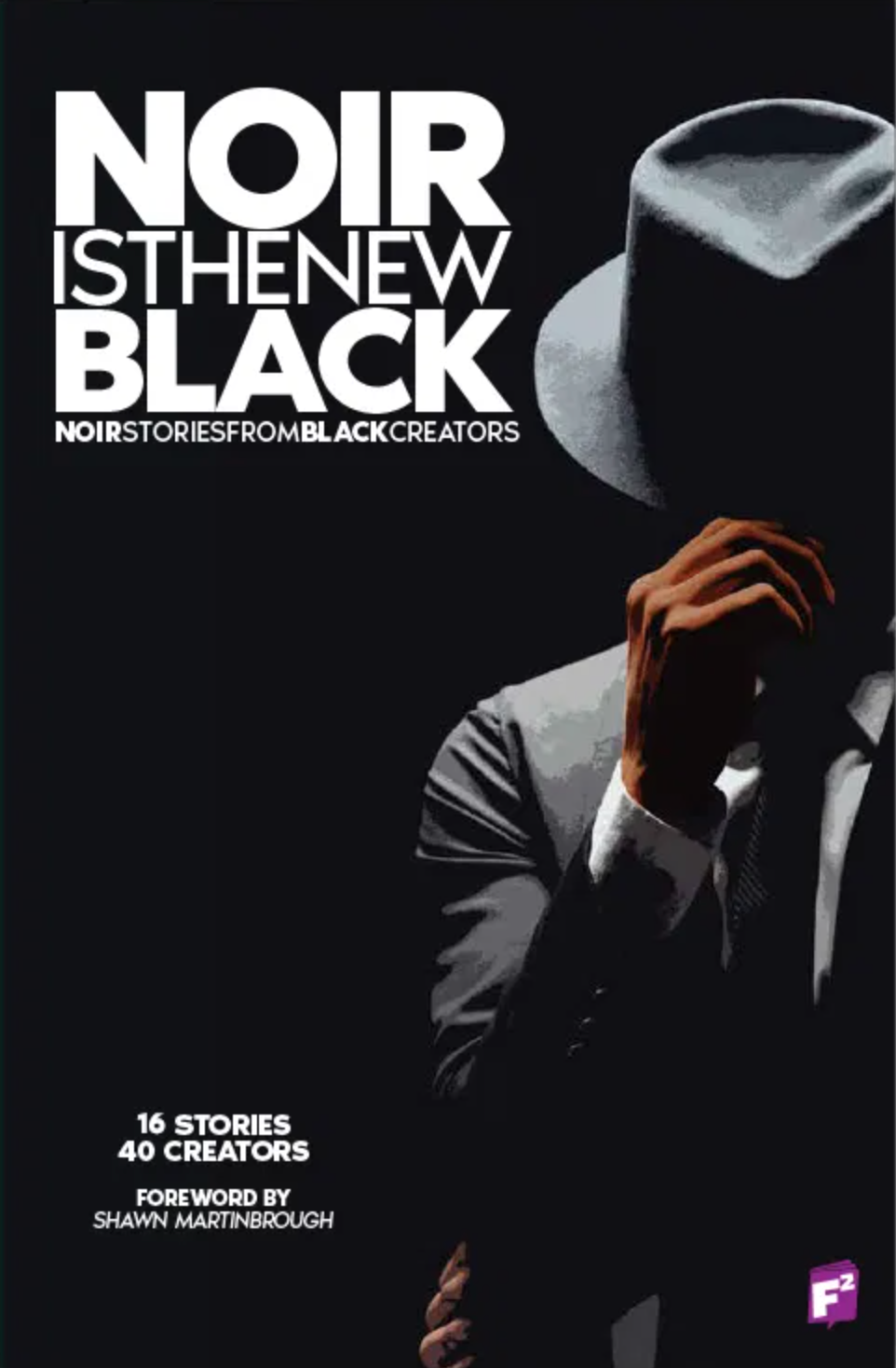 This collection absolutely and completely blew me away. I had planned to talk about which of the entries were my favorite, but I can’t because I’d end up listing 3/4 of the table of contents.

Some of the stories herein are based on the traditional noir mold. Some start that way and end up in a place you would never expect. There are several LGBTQIA+ focused tales, a couple of which grabbed my heart and really dug in (one also happens one to be a ghost story, the other a family crime saga). History. Politics. Sex. Goat heads. Sex and goat heads. A little bit of everything really and all of it impeccably written, gorgeously illustrated, and immaculately organized into a hell of a book.

I’ve read a lot of comics and a lot of comics anthologies and I have to say Noir is the New Black is probably my new all-time #1. I scarfed it down in one sitting which I don’t have time to do very often these days so when I make time it’s pretty telling vis a vis the relationship I’m having with the book that’s in my hands at that moment. As a collection it’s sharp, smart, and unafraid. So get thee forth. 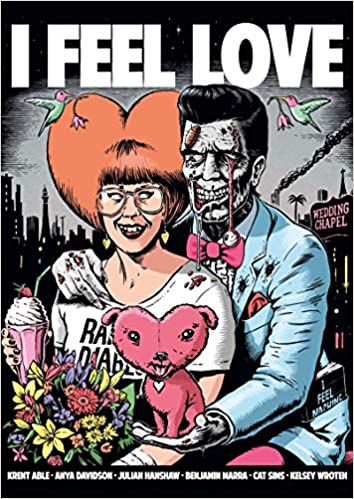 I Feel Love (ed. Krent Able and Julian Hanshaw, Self Made Hero)

So, I’m going to come out and say it: I Feel Love is fucking weird. That is not a knock. I actively seek weird out. As I tell my kids at least twice a week: weird is good. And this anthology couldn’t really be anything else, because love is weird. We don’t understand it. We can’t explain it. And yet most people look for it, or at least think they should be actively engaged in doing so. We put it at a premium. We invented a stupid holiday to celebrate it. And even when it crushes us, we usually try to go another round.

I Feel Love examines a lot of different aspects of the concept. Some of them are very much on the Eros side of the thing (like, really, really Eros, consider yourself warned). Some of them aren’t so nice. Some make us confront the idea that we may think we know what we want and realize what we want is not to be in love at all. Or that they key to loving others is to love ourselves, not only intellectually but actually.

There are a lot of layers.

Come. Unpeel them. If you dare.

I highly recommend all three of these anthologies, whether you’re an experienced comics anthology reader or just starting to wade into the pool. Many of the writers in each of these have contributed to other collections which is another great things about these group projects: they help you discover new writers to follow. Which, you know, also empties your bank account. But at least you have something to show for it.