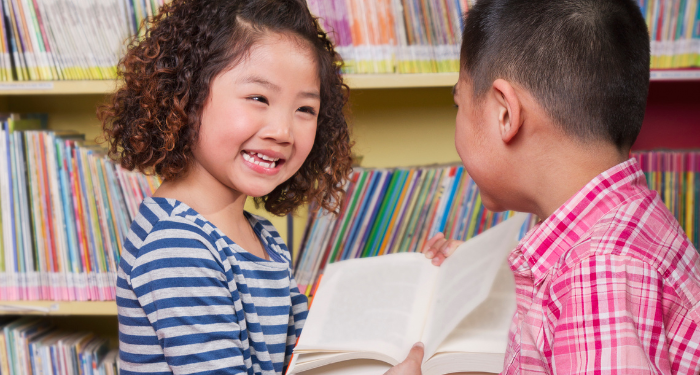 It’s January 2023! How can it be 2023?! I’m also writing this from November 2022, which is a solid reason for feeling affronted. While it is far too early in the year to be speculating about award-winning children’s books, so many of January children’s book releases scream award-worthy. For example, the jaw-dropping illustrations by Dare Coulter in Kwame Alexander’s latest picture book, An American Story, are so gorgeous and evocative that I am ready to hand it a Caldecott. New picture books by Ibtihaj Muhammad, Julie Flett, and Anne Wynter all feel like instant classics, while popular adult novelist Emma Straub makes her picture book debut with a delightful and silly story about hats.

I’m ready to give awards to several books on January’s middle grade list as well, where novelists explore the ramifications of school shootings, school segregation in the 1950s, 1930s Ukraine during the Holodomor, toxic masculinity and domestic abuse, and so much more. 2023 isn’t holding anything back when it comes to books. It was hard to narrow this list of January children’s book releases down to just 12 books, so I recommend signing up for The Kids Are All Right newsletter, where I and middle grade author Karina Glaser will be reviewing even more children’s book new releases as well as making themed lists. Happy New Year! May your 2023 be filled with excellent books! 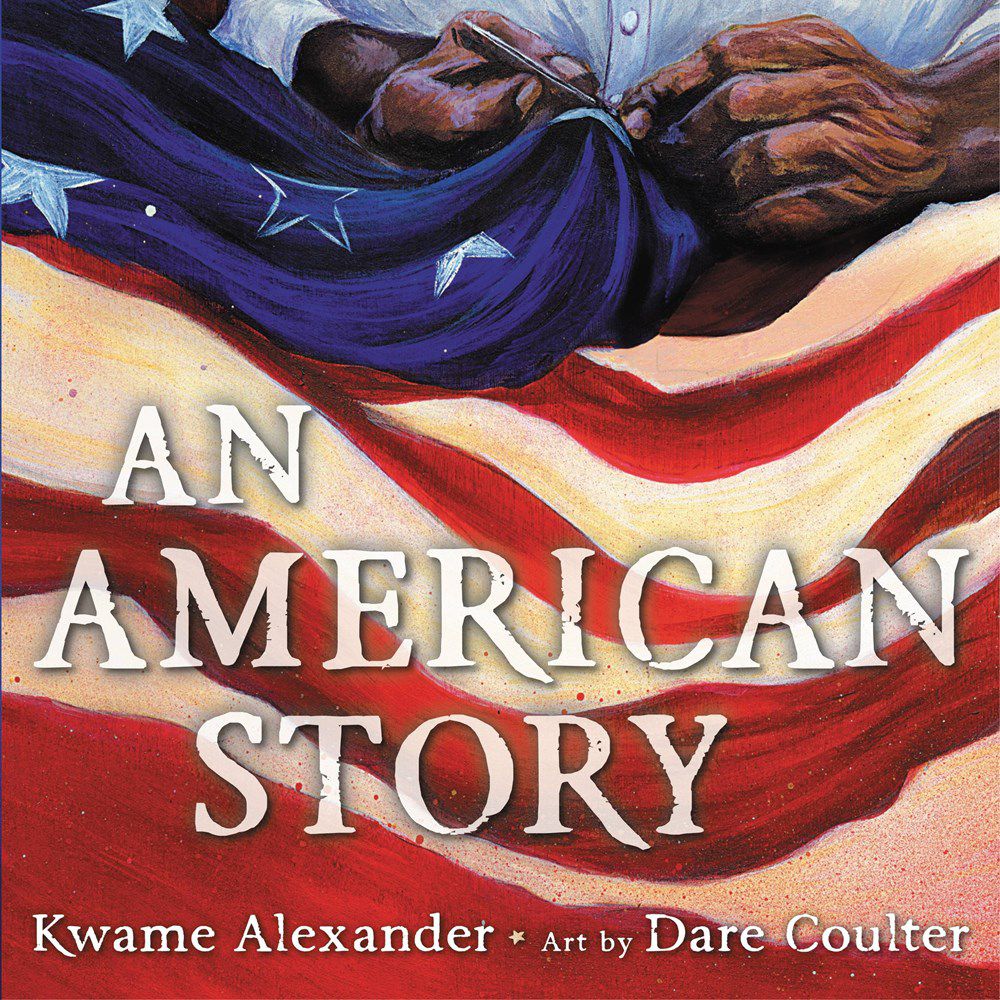 In an interview with School Library Journal, award-winning author Kwame Alexander explains the impetus for writing this picture book. After an incident where his daughter’s 4th grade teacher struggled to answer student questions about slavery, he decided “to write a book that would give teachers an entry point into how to teach slavery.” An American Story opens with a teacher doing just that, teaching a classroom full of students about the United States’ history of slavery. In lyrical verse, Alexander writes about an African village where Black folk listen to stories by the fire, a ship packed with shackled men and women, people leaping overboard to escape, and more. Coulter’s mixed media illustrations are absolute masterpieces, deeply moving and evocative. This is a must for every classroom. 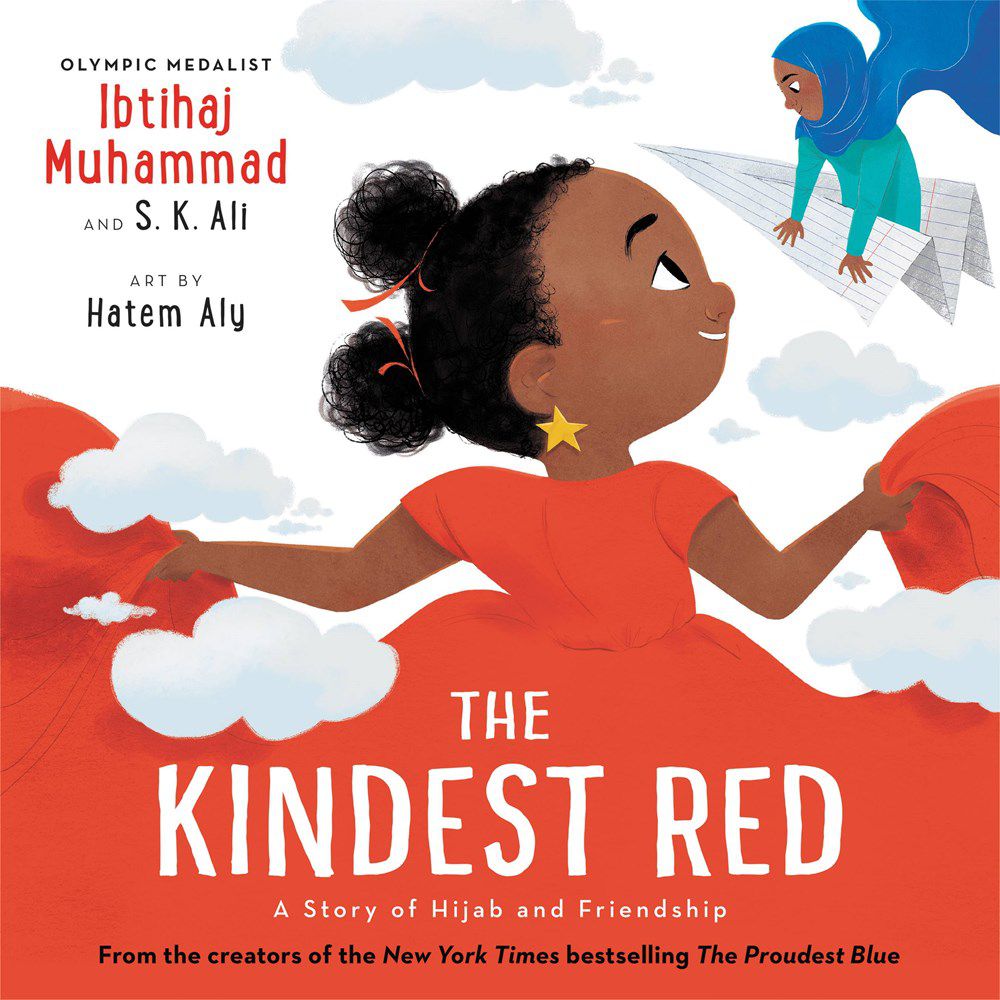 This standalone follow-up to The Proudest Blue is a lovely story about kindness, friendship, and family. Two big things are happening at school today: it’s picture day, and Ms. Ramirez wants the students to create their own worlds and draw pictures about their worlds. Faizah wears a special red dress passed down from her mother and sister for school pictures. For the school assignment, she draws a world full of kindness, where everyone is a friend and helps those around them. When Faizah realizes she and her sister aren’t matching for their school pictures, her imaginary world of kindness inspires her friends at school to help out. 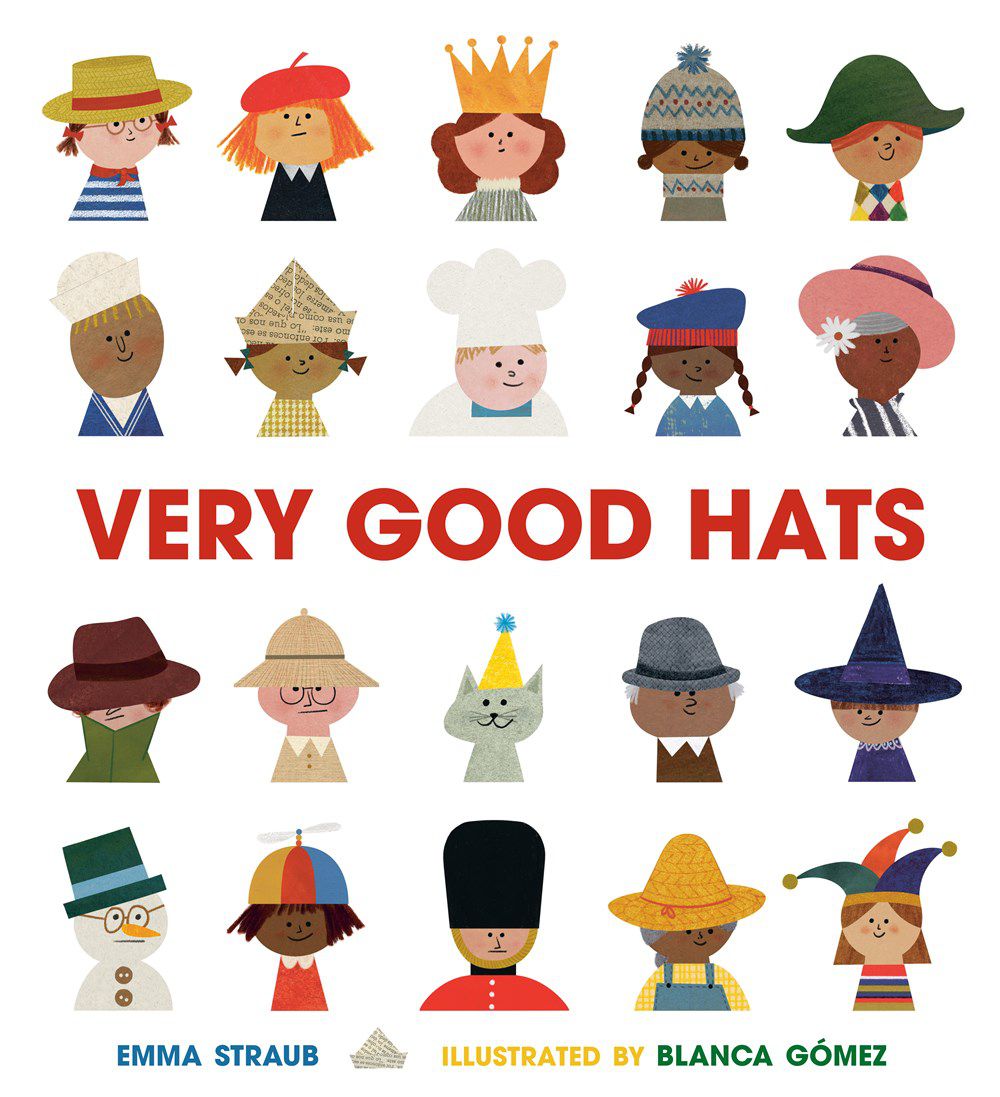 Best-selling novelist Emma Straub makes her picture book debut in this adorable and funny read-aloud about hats. Hats can be many things: the roof of houses, leaves that fall just the right way on top of heads, perfectly balanced books, ice cream bowls. All it takes is a little imagination for a whole new world of hats to open up. Gómez’s delightfully cute illustrations are a perfect companion for Straub’s simple and funny prose. This picture book is sure to inspire a lot of hat play for kids. 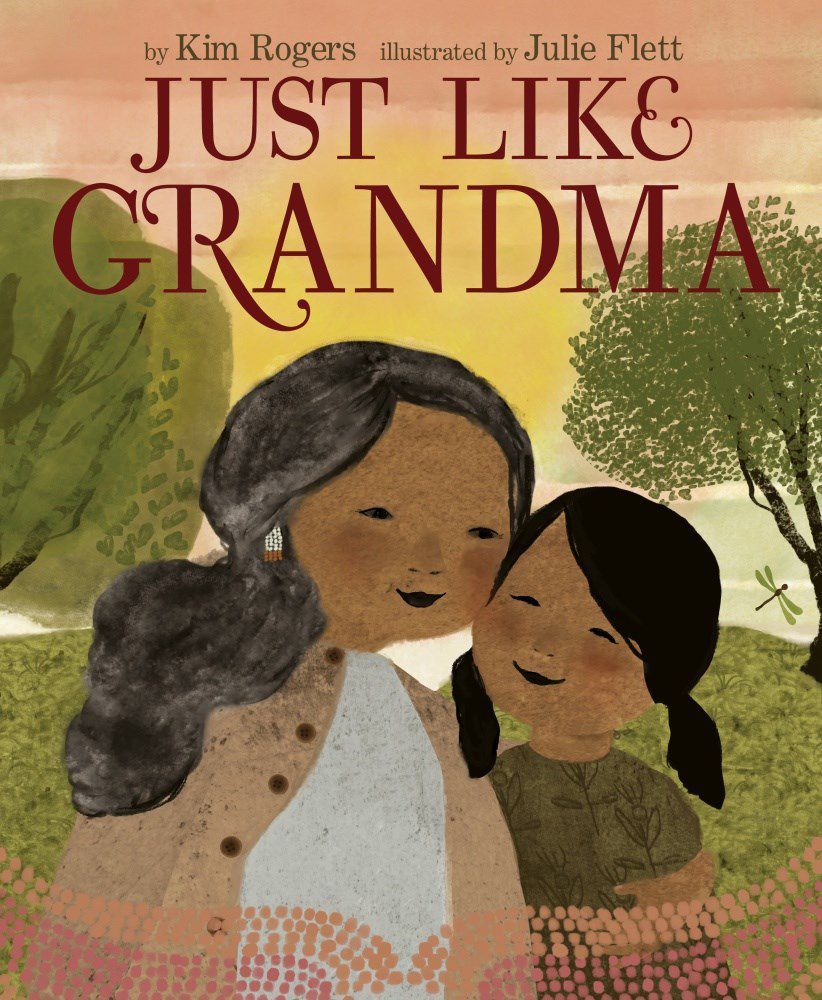 This is a super sweet intergenerational picture book centering an Indigenous grandmother and granddaughter with warm and tender illustrations from one of my all-time favorite illustrators, Julie Flett. Becca wants to be just like her grandma, whether she’s watching her grandma dance in a powwow, bead moccasins, or play basketball. With Grandma’s help, Becca learns how to do these activities and more, and in the process, finds out some things she never knew about her grandma. Kim Rogers, Wichita, writes a lyrical and playful homage to the special relationship between grandmothers and granddaughters in this picture book. 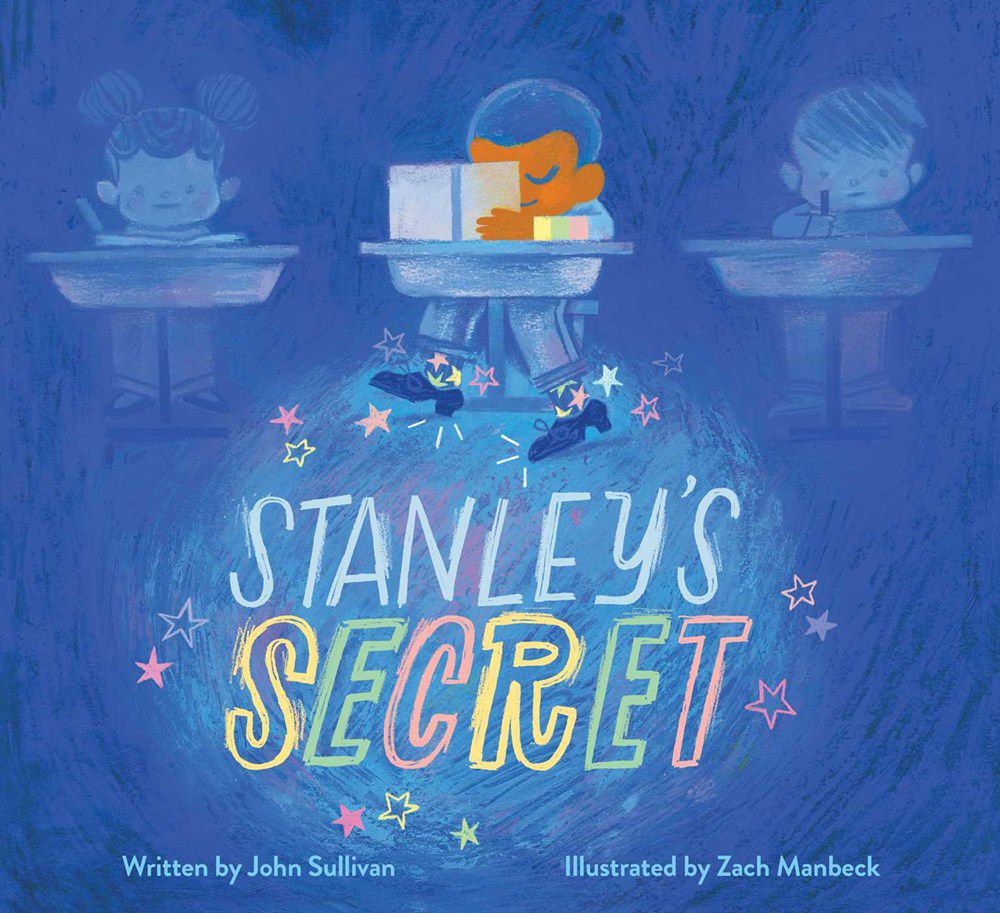 This heartwarming picture book reminds me of my own quiet, shy childhood. Stanley dreams of tap dancing in front of an audience, but he’s too shy to tell anyone about his dreams beyond his two pet mice. Instead, he practices tap dancing after school in empty classrooms and hallways as he helps the janitor clean. However, his secret is discovered when the school installs security cameras. The principal thinks he should participate in the school talent show, but how could he share his dancing with the world? Accompanied by energetic, retro-style illustrations, this picture book encourages readers to express themselves and share their talents. 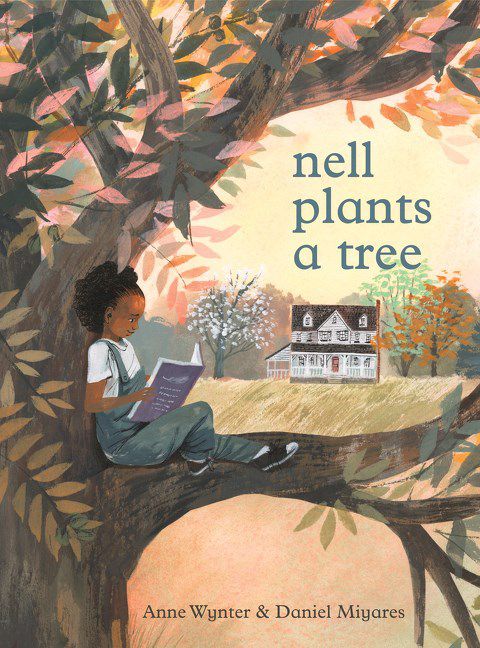 Author Anne Wynter bases this gorgeous, intergenerational picture book on her childhood experiences growing pecan trees. Wynter seamlessly integrates two parallel timelines: that of the grandmother as a child planting a seed and a future where grandchildren gather around and in the pecan tree that seed becomes, watching birds hatch and having picnics in its shade. It’s a lovely, poetic read that feels like a classic. Daniel Miyares’ illustrations are warm and rich. 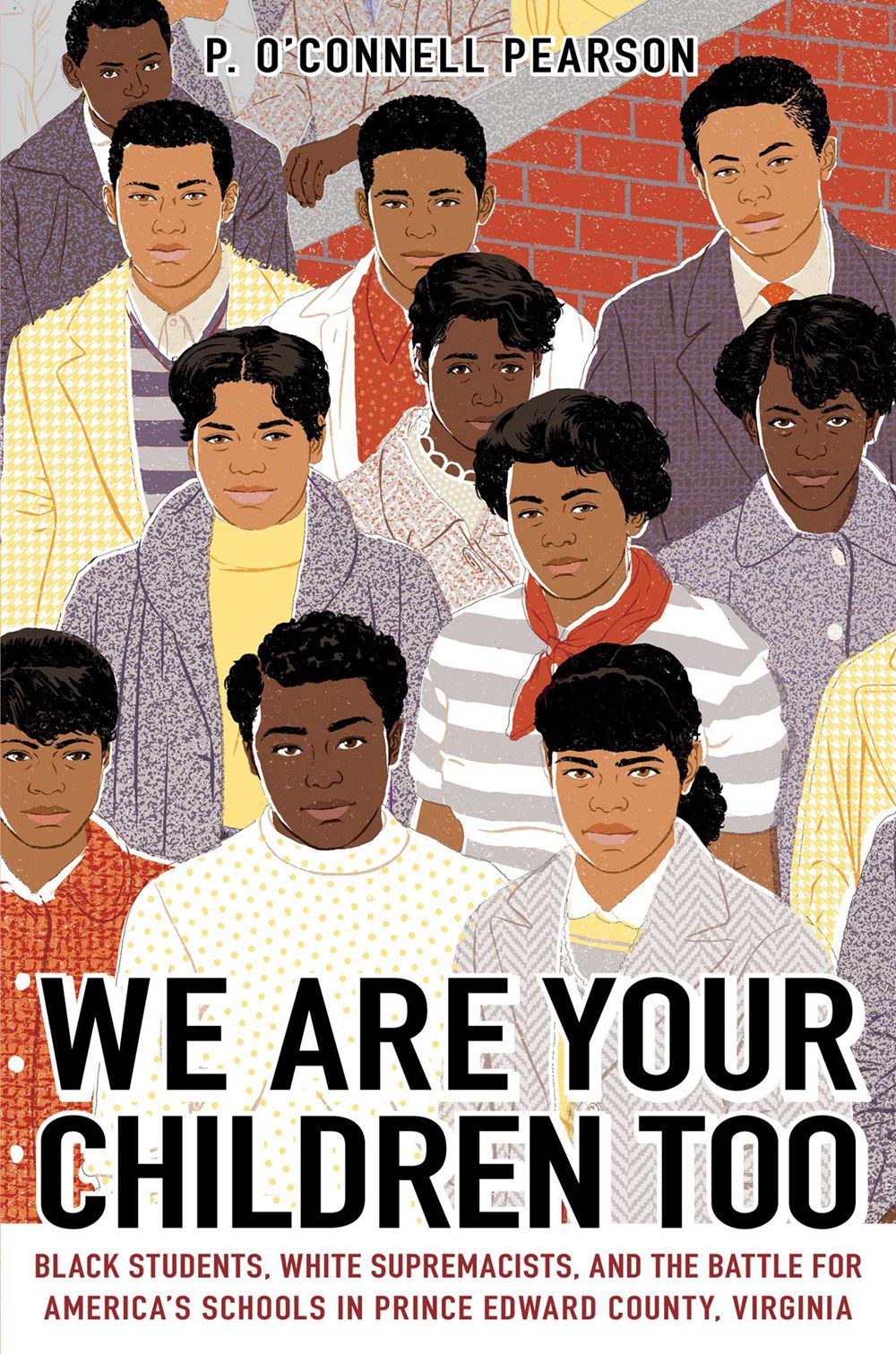 We Are Your Children Too by P. O’Connell Pearson (January 10; Simon & Schuster Books for Young Readers)

This fascinating nonfiction middle grade tells the story of how Prince Edward County, Virginia became the only place in the United States to eliminate all public education after the passing of Brown v. the Board of Education in 1954. The all-white school board decreed that they would rather no one receive an education than for schools to become integrated. All schools remained closed for Black and white students for five years. However, wealthy white families funded a private school that admitted white students only. Black and poor white families were forced to find schooling elsewhere or go without. Many families moved or sent their children to live with relatives where they could attend school. It’s a disturbing period in history, and Pearson traces how racism in the area from the 1600s on led up to the book’s primary events. It would be a great reference book for school libraries to have for kids looking for more resources on the Civil Rights Movement, activism, and education. 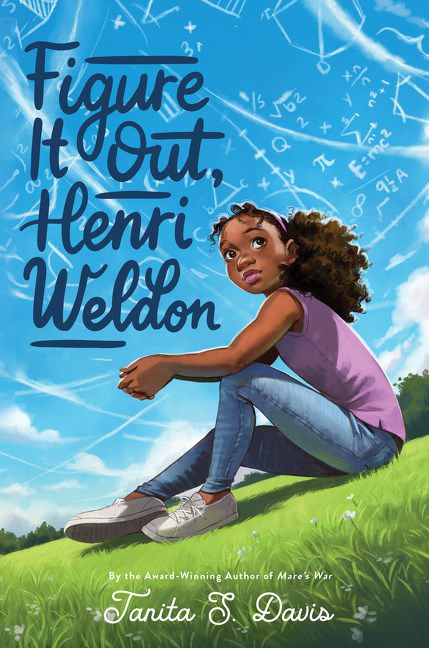 7th-grader Henrietta Weldon, or Henri for short, has dyscalculia, a learning disability that makes math especially hard. Previously, Henri attended a private school to get more one-on-one tutoring for her disability. However, her mom is starting a PhD program, and with the family strapped for cash, Henri will now attend public school, where her older brother and sister also attended. She’s excited about going to a new school and soon makes friends. However, Henri’s sister Kat hates her new friends for good reasons, and Henri is finding her new schedule — which includes soccer and poetry — overwhelming. How can Henri balance new friendships, her passions, school, and a sister she fights with constantly? Her mom thinks she should concentrate on school and drop everything else, but Henri disagrees. This is a fantastic new middle grade novel that is funny and super relatable. 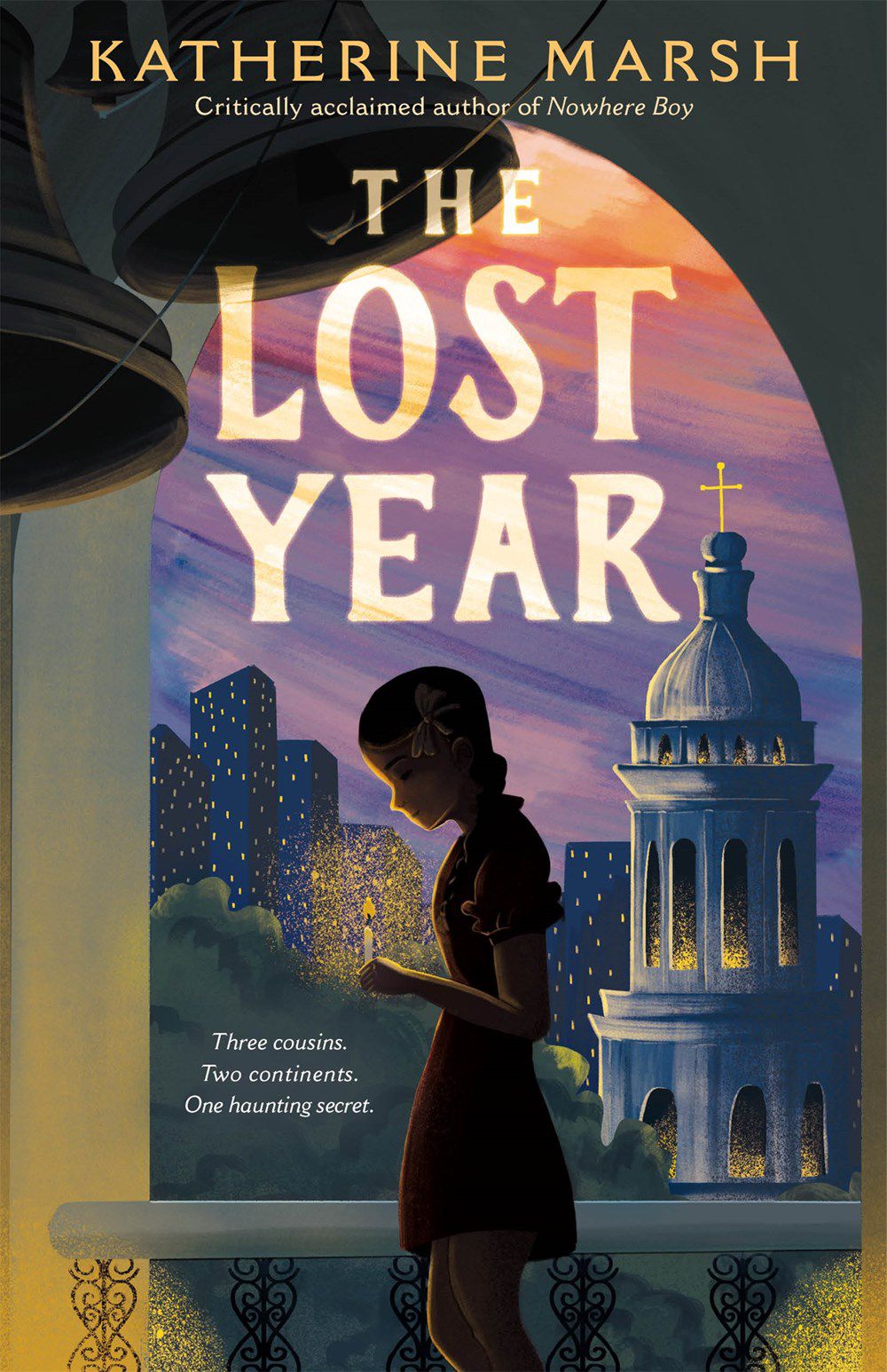 This wrenching and beautifully written middle grade novel entwines two timelines. In the present, 13-year-old Matthew begrudgingly moves in with his 100-year-old great-grandmother to ride out the Covid-19 pandemic while his journalist father works in France. While helping his great-grandmother, he discovers more about her past, and the novel switches to the perspectives of three Ukrainian cousins during the 1930s, revealing devastating details about the Holodomor — a Soviet government-created famine that killed millions of Ukrainians. While it sounds like a complicated narrative — with multiple points of view and timelines — Marsh seamlessly integrates the alternating viewpoints and timelines. It’s a moving, relevant story about an important historical event largely unknown in the U.S., inspired by Marsh’s family history. 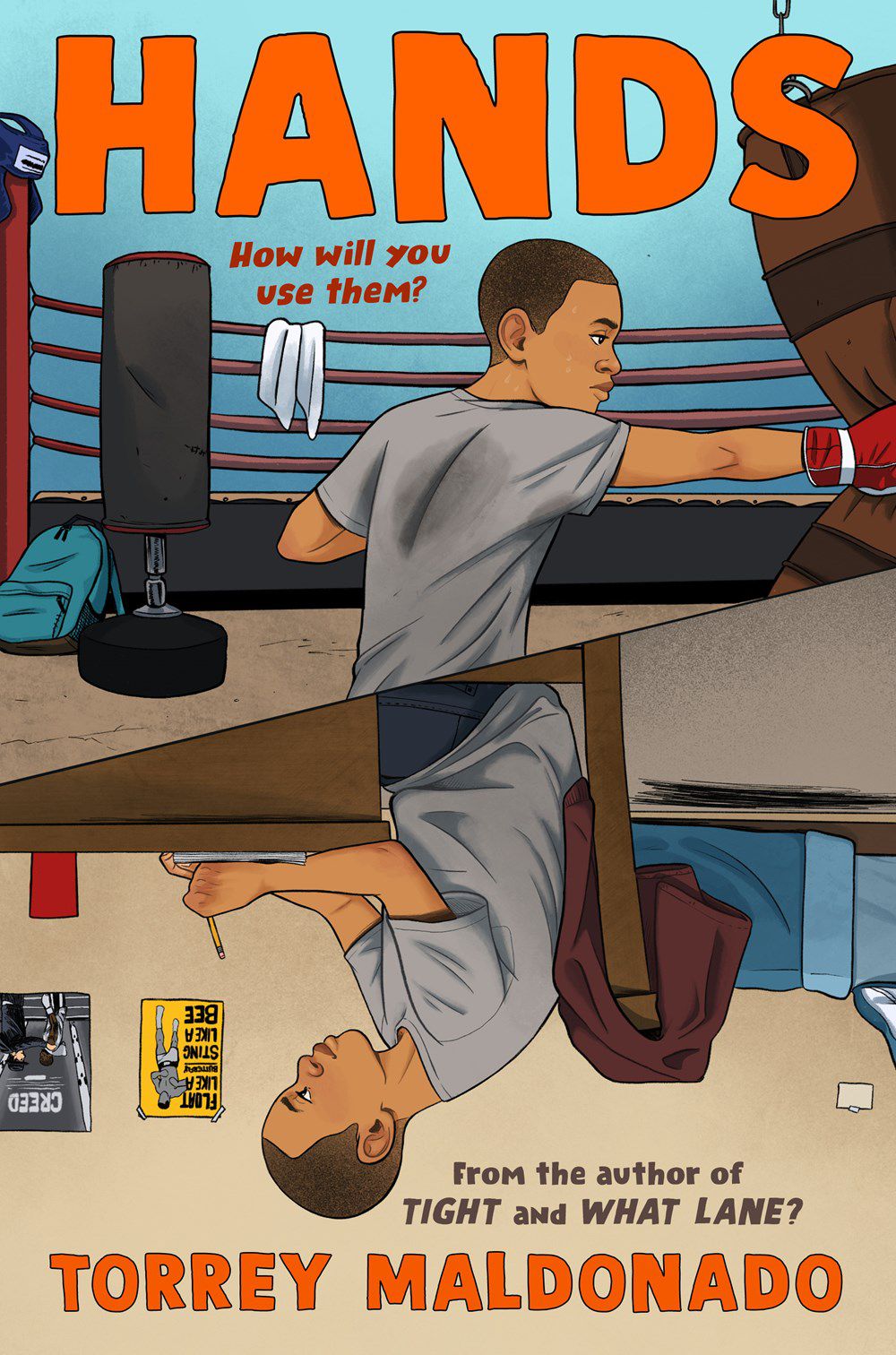 12-year-old Trevor, or Trev for short, is a talented artist. However, when his stepdad is imprisoned for hitting his mom, Trev decides he needs to be able to use his hands for a different purpose — to protect his mother and sisters. Trev begins taking boxing lessons, but with his emotions spiraling with all the stress he’s under, the physicality of the sport has him reacting in too-violent ways. Maybe he should return to art and help his family and community that way, but how will art protect his loved ones? This brief but packed novel explores toxic masculinity and Blackness in a nuanced, moving way and packs both a literal and metaphorical punch. 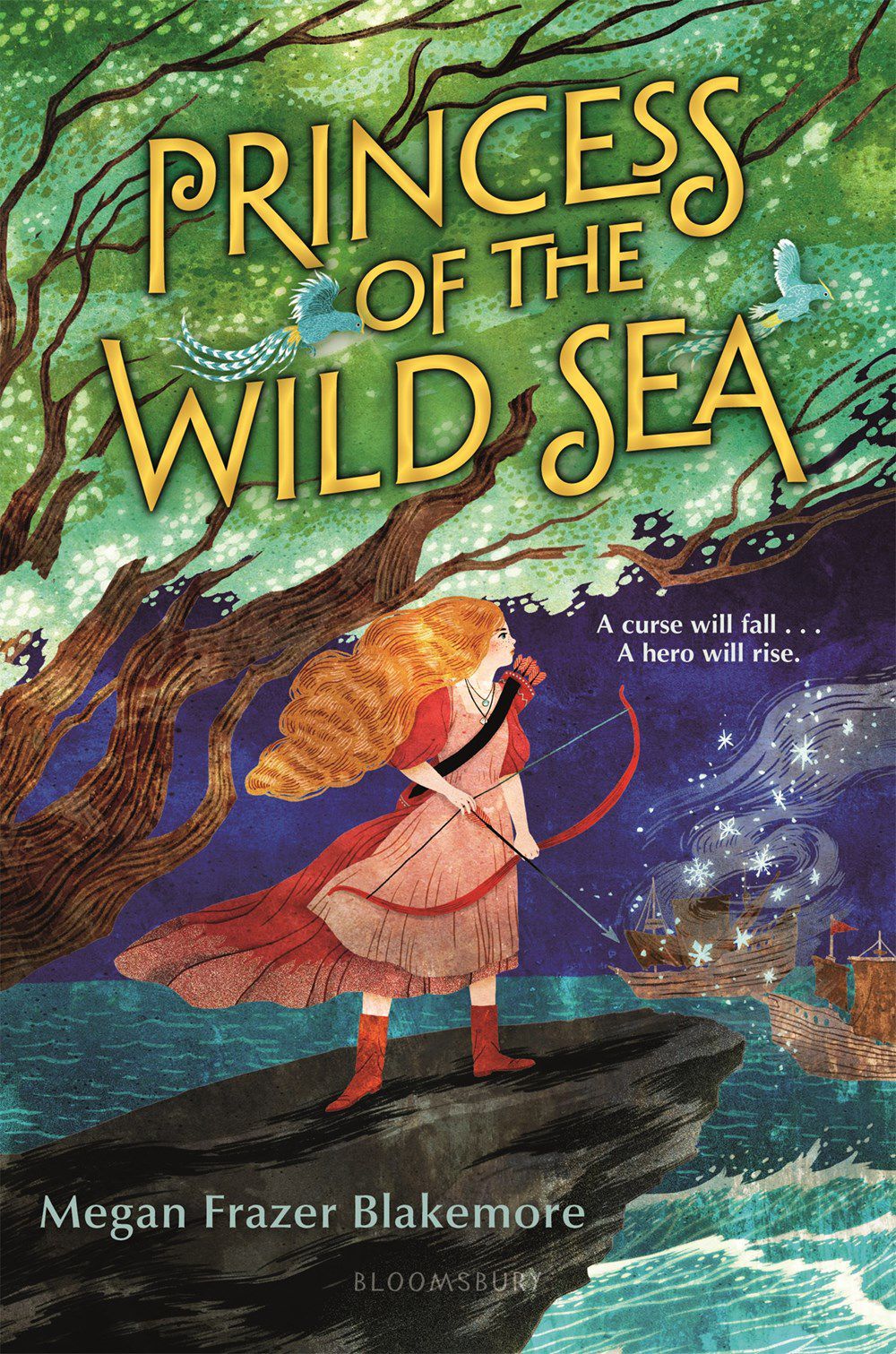 This fantasy retelling of “Sleeping Beauty” is perfect for kids who love the movie Brave. When Princess Harbor Rose was born, one of her fairy aunts cursed her. To keep her safe from the prophesied war and death that she’s been cursed with, Harbor’s mother whisks her away to a remote island where more of Harbor’s magical aunts live. No children live on the island, and Harbor has both a magical and lonely childhood. When the prophecy’s time arrives, and the boy Peter — the prophesied hero — arrives, Harbor realizes that to save her people and her family, she’ll need to love herself, curse and all, and become her own hero. 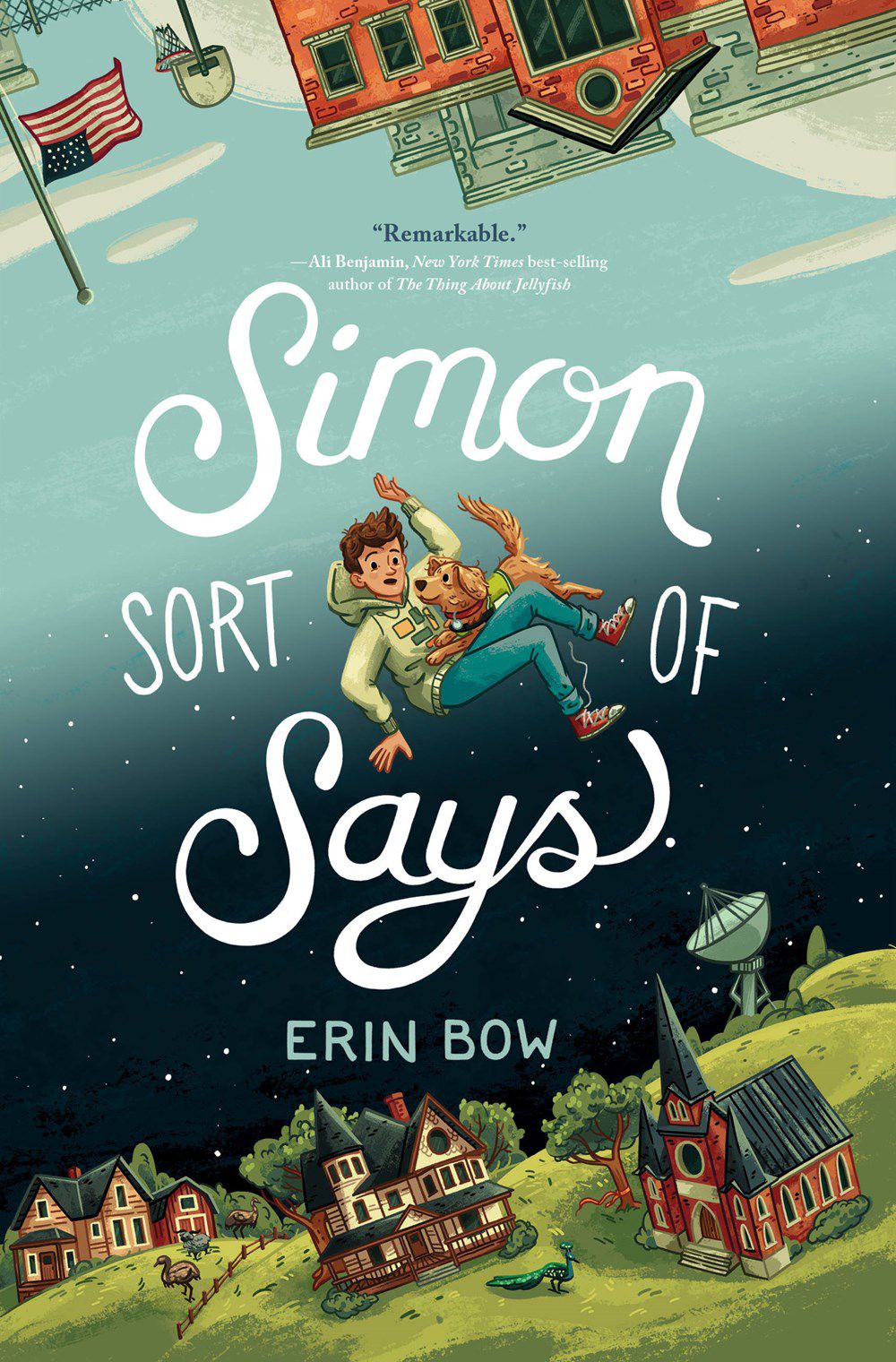 After a school shooting leaves Simon as the only surviving member of his classroom, his family decides to move to a place where no one knows him and where he can have some peace and quiet — the National Quiet Zone in Grin and Bear It, Nebraska. The internet is banned in Grin and Bear It so scientists can better study space, and Simon can return to a somewhat anonymous childhood. Simon wants to start a new life and leave the past behind him, but, of course, there’s no way to leave that kind of trauma behind. His friends Kevin, who is Filipino American, and Agate, who is autistic, try to help Simon. But the three get into mischief when they fake alien signals to fool the scientists. Bow tackles really tough topics in this novel with grace and empathy while also threading in laugh-out-loud humor throughout.