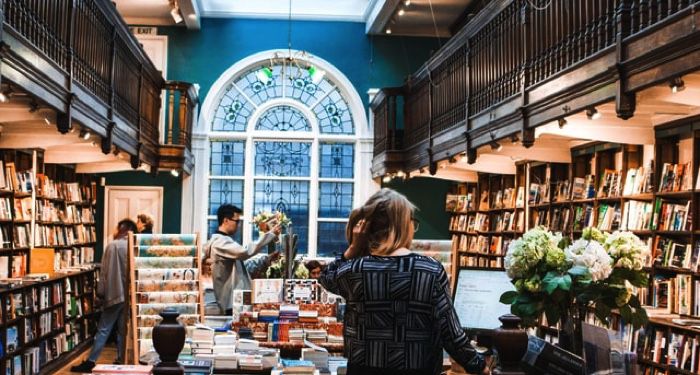 But the thing is, even though I’m a dedicated independent bookstore shopper, I don’t often use my local bookstores for discovery. By the time something shows up in the window at Barnes & Noble, I’ve probably already decided whether or not I’m going to read it.

Now, I can’t lie and say this isn’t because books have been my job — or part of it — since 2010. I’ve worked largely in kids’ books for the last few years, and even though I don’t only read kids’ books, I’ve still learned how to learn about books in general.

How I learn about new authors and their books is the same way other people do: through word of mouth. Through Twitter. Through Instagram. Through TikTok. Through my book club discussions. Through excited, or exasperated, texts from friends. Through Book Riot’s emails in my inbox.

So I was just a bit frustrated to see a recent New York Times article with the same old complaints about how book discovery is dead. The article trots out the same publishing issues that news outlets have been discussing since the advent of Amazon: bookstores are dead, book discovery is dead, and there’s no good way to buy books by new or lesser known authors outside of Amazon.

Oddly, it only brings these trials up after a nice, cozy lede about how book sales are up, up, up! “Last year, readers bought nearly 827 million print books, an increase of roughly 10 percent over 2020, and a record since NPD BookScan began tracking two decades ago.” The article fails to note that, despite the disruption of a lockdown, the beginning of a pandemic, and countless supply-chain issues, book sales only dropped .2% (that’s point two, not two) in 2020. That’s on top of the fact that 2022’s first quarter sales have beat 2019 Q1 and 2020 Q1 sales.

But, according to this article, book discovery is a huge problem. And it is! It’s a huge problem… for publishers. The article quotes Peter Hildick-Smith, president of a group that analyzes the book industry. He says, “there’s an endless appetite among the tech people and publishing industry people to find the Holy Grail of book discovery, but I don’t think anyone has found a tool or an algorithm or an A.I. platform that does the job for you.”

I don’t know if Hildick-Smith meant that last clause to be a bit shady, but it can certainly be read that way.

The other urgent problem that the book world is having? That individual titles aren’t selling enough copies. “Of the 3.2 million titles that BookScan tracked in 2021, fewer than one percent of them sold more than 5,000 copies.” The article only cites figures from 2021, with no historical figure to show whether or not this is bad or unusual. Anne Trubek, publisher of independent midwestern press Belt Publishing, dug into this statistic in her recent newsletter, if you’re interested.

The New York Times article goes on to list a half dozen book discovery services. Some are hoping to free their users from Amazon. Some want to connect readers to authors. Others aggregate popular social media posts in order to help readers find the buzziest books. (Aggregating tweets? In the year of our Lord 2022?) One, bless its heart, is pitching itself as “Netflix for books,” as though that wasn’t tried a hundred times between 2012 and 2018. I was in those pitch meetings.

I have a theory. I think there are various reasons that people get into the book recommendation algorithm business, but I think one of them is that they want to figure out how to make money doing something noble. Maybe there isn’t an obvious way to use that venture capitalist money in a way that makes the world better, so maybe try throwing it at books! Books are great! I get the inclination. I’ve been throwing money at books since I got my first allowance.

But the problem with book algorithms is they can’t work without information, and it’s very difficult for a tech company to collect information ethically. Once you give a corporation access to your social media accounts or sales history, you can’t get it back, and you can’t stop that company from selling your information to someone else — and they probably will.

But if you are having trouble finding your next favorite book, you luckily don’t need algorithms. You’ve already got lots of options.

For starters, you could find the book-loving celebrity of your choosing and jump on their bandwagon. If you’re lucky, and you live near an independent bookstore, a bookseller would love to ask you about the last book you loved and try to find one that scratches that same itch. You could go to a book talk at your library.

Then there are services you could sign up for, like TBR, Book Riot’s Tailored Book Recommendations. For a small fee, a dedicated reader can read your survey responses and find just-right books for you, from an author you’ve never read before. (Full disclosure: I write recommendations for TBR.)

You could flip through social media or do a favorite book swap with a friend. Go to a Little Free Library and challenge yourself to read something you find there. My point is, book discovery can happen any number of ways without being tied to some algorithm behind a curtain. And it does. Book discovery is a publishing problem, not a reader problem.

If you’re interested in discovering new authors and books, here’s a guide that includes some helpful breakdowns.