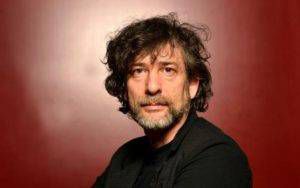 My introduction to Neil Gaiman was through American Gods, which I discovered in the fall of 2003, a few years after it came out. While he was hard at work making the magic happen that would become a bestselling novel, a comic book adaptation, and eventually a television mini-series, something more mundane but equally as magical was also happening—he was journaling about it.

It’s hard to remember now when blogs were young and less common, I know. But Neil Gaiman has apparently always had an ear to the electric ground of technology (his tweets also reach back before everyone including TGI Fridays had an account), and he discovered this medium where you essentially write diary entries for the eyes of the online world only. And he liked it. And he not only liked it, but he believed it would be a cool way to document, for himself and for others, the process of researching and writing a novel. And behold, on the ninth day of February 2001,  Neil Gaiman’s online journal was took its first breath.

By the time I got around to it, the American Gods blog had already evolved into a more garden variety journal. I use “garden variety” in the lightest of senses here, because while his thoughts were often about travel and sleeping and not sleeping and actual gardening, they were also frequently honest, intimate, inspiring, funny, sad, touching, human, wonderfully everyday and profound in just the way you might expect. Oh, and bees. And dogs. They were often about those, for a while at least.

If you are a fan, you probably are very familiar with Neil’s Journal, which can be found on his website. If you are not a fan, or have not yet ruminated through its digital stacks, let me bring your attention to a number of my very favorite passages.

On Returning to Normalcy, Loving Autumn and a Lovely Moment With His Daughter

“…I’m not yet used to being home. (Yesterday I juiced all the Haralson apples, and I cooked lots of Hen of the Woods mushrooms, and I stood in the autumn sunlight and tried to explain to Maddy why I thought this was the best time of year of all, which I couldn’t do without going all Bradbury.)”–October 8, 2006 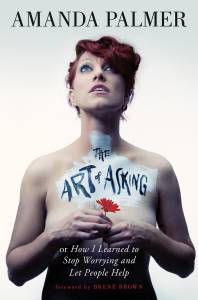 On Having Just Completed The Project Who Killed Amanda Palmer, Through Which He Met And Fell In Love With His Future Wife, The One And Only Aforementioned Amanda Palmer:

“It was a fun project. I made some fine friends out of it, with Amanda foremost among them as we discovered that we agreed about pretty much everything to do with making art and the way you treat your fans and readers, and such (although not, oddly enough, about getting naked and pretending to be dead on golf courses, which is definitely Her Thing). I already knew she made good music, and I learned that she’s really nice, and fearless, and very, very funny, and the sort of person who, at the end of an exhausting seven month world tour, would spend a month working for free with the kids at her old High School to help them put on a show.”–April 21, 2009.

On Sharing His Childhood Love of Doctor Who With His Own Children, With Unexpected Tears:

“When I got home from recording, I watched the final part of this season’s Dr Who last night with Mike and Maddy (and our friend Sarah). Maddy watched the end of it with her head on my chest, and it was only after it was over that I discovered that my tee shirt was soaked with her tears.

I love that Russell Davies and his team have built something I can watch with her, that she cares enough about to shed tears over…”–July 28, 2006

On Being Photographed At The Wedding of Comic Book Writer, Self-described Wizard and Charmingly Certifiable Nutter Alan Moore: 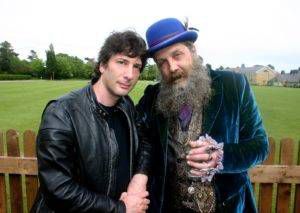 On His Ancient and Understandable Obsession With Sushi:

“Ate more conveyor belt sushi for lunch, but I think that’s it for me and conveyor belt sushi. (But surely, you must be sick of sushi by now? chorus the multitudes who have been reading this blogger. Er, no, not yet, says author.)”–July 6, 2001. He continued to write about eating sushi for another decade at least, though he either started eating less of it or just did it quietly, in secret.

On Well-Wishes for His Readers (Now available printed on every imaginable thing on Etsy):

“May your coming year be filled with magic and dreams and good madness. I hope you read some fine books and kiss someone who thinks you’re wonderful, and don’t to forget make some art — write or draw or build or sing or live as only you can. And I hope, somewhere in the next year, you surprise yourself.” (Dec. 31, 2004)

He journals now less than he once did, which he knows. Twitter suits him, and he’s as busy as ever with projects and marriage and fatherhood, which also suit him. And of course, as we learned from Sandman, he believes in things that are story-shaped and that means he believes in endings. The journal will end or so he has said, but the Internet never forgets. Lucky us.