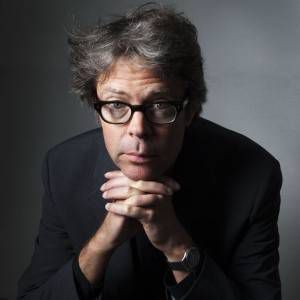 It would seem Jonathan Franzen is a cartoon snowball that has gathered mass as it rolls from the summit to the bottom of the mountain that is 20th century literature. Here he now rests, a gargantuan, gleaming iceball that has found its place in the sun.

His most lauded work, The Corrections, made him a critic’s darling in 2001, propelling him to become one of the most discussed and polarizing figures in literature since the turn of the millennium. Purity, his new tome, has received much praise as well (sort of), and has again made him the center of the discussion on what it means to be a “great American novelist” in the 21st century.

By his fans, he is often referred to as one of the few remaining writers to earn this lofty designation, some lone artisan continuing an ancient trade. Perhaps this is why reviews of his work often begin on a macrocosmic level, naming him as a successor to William Gaddis, Thomas Pynchon, and Don DeLillo. In a reviewer’s mind, I would guess these starlit names give context to the man and his work. After all, it’s clear to see that these authors have influenced Franzen’s work, especially Gaddis, who he’s written about in detail in his famous “Mr. Difficult” essay which appeared in the New Yorker in 2002.

In fact, Franzen lists a group of 13 authors that have inspired him in this essay, referring to the baker’s dozen as “a canon of intellectual, socially edgy white-male American fiction writers.”

Which brings me back to my less-than-subtle snowball metaphor. Calling Jonathan Franzen the “only great American novelist” or suggesting that he is some kind of bookish outcast crusading for the perpetuity of true literature is a much more malicious statement than it would appear at first glance. It suggests that real American literature is written by white men, always has been written by white men, and now is being written solely by a white man.

I’ll level with you. I liked The Corrections. I’ll be the first to admit that there are times when Franzen’s work has shined. What’s more, I don’t think the perfidious title that is often bequeathed on him is a fault of the Franzen himself. The mere fact that more than a decade ago he was able to identify the exact type of writer to which he gravitated is a statement in itself. It’s a sign that on some level he’s aware of his shortcomings. The problem is that critics, fanboys, and the publishing industry in general allow the aura of Franzen to keep beaming. He continues to be praised shamelessly, elevated to some untouchable echelon.

It’s as if we didn’t heed the warning, broadcast by the author himself 13 years ago. He blatantly, and based on the essay’s language somewhat abashedly, announced the singular nature of his influences.

That’s why I like to believe that Franzen had deeper purpose in writing “Mr. Difficult.” While I ultimately disagree with most of his conclusions, it gives readers much insight as to where he’s coming from as a writer. With no expectations, there can be no disappointment. The Corrections, at its simplest level, does an adept job of capturing a small, selective segment of the American population. Though it is chock-full of platitudes, the nuanced prose makes it an enjoyable read. Hell, as an upper middle-class white boy from the Midwest, it could’ve very well become one of my favorites – if I wasn’t paying attention.

However, the literary landscape today is too rich to continue deifying this old relic, and continuing to worship its creator is misguided, for the reality is that Franzen hasn’t kept pace with contemporary literature, or really contemporary anything, for that matter. He is a privileged enough writer to vocally disdain Twitter, pokes jokes at any authors he finds too lowbrow, and generally only participates in society when he chooses. Every time he books an interview it’s guaranteed to spark a dozen think-pieces and cause a hurricane across the same social media he rejects.

How do we expect a man to write about the American experience when he refuses to participate in it?

More so, Franzen’s biggest advocate is himself. In his same “Mr. Difficult” essay, he swears off experimentation, as if he could foresee his own future irrelevance, suggesting that novels should be “conservative and conventional.” I can’t think of a better phrase to aptly describe his hallmark work. This stance seemingly gives him an out on all the books to come since 2001, because he can fall back on big ideas rather than the details that elevate books to extraordinary. This actually prevents him from having the ability to write anything remarkable, because he loses out on the minutiae that can only be put to paper if one chooses to exist in the present day.

This is why we must change the conversation about Jonathan Franzen. Like a student in a writing workshop who can’t take criticism, Franzen sits on the sidelines and participates only when there’s little to lose, using intellectualism to prove that he is a brilliant, unique snowflake.

When we reward and validate this behavior, we are silencing other voices, allowing the stereotype of a middle-aged white man surrounded by books in a library, clacking away at a typewriter, to continue to be our view of an American author. It is undeniable that Franzen is an American, that he reveals some of our worst tendencies, and that he is an author that deserves recognition, but he is not the only great American novelist. He is the crust on the biggest slice of pie. He is the continuation of a myopic interpretation of American literature. We must talk about Franzen for what he is, a giant squid in an ocean of brilliant writers, lurking in the depths, only emerging to strike awe and terror before returning to the unknown. Putting him on a pedestal is an injustice. It is the continuation of monochromatic tradition.