Neal Shusterman is the New York Times bestselling author of more than thirty award-winning books for children, teens, and adults, including The Unwind Dystology, The Skinjacker trilogy, Downsiders, and Challenger Deep, which won the National Book Award. Scythe, the first book in his newest series Arc of a Scythe, is a Michael L. Printz Honor Book. He also writes screenplays for motion pictures and television shows. His most recent book is Thunderhead, the newest in the Arc of a Scythe series. The father of four children, Neal lives in California. Visit him at Storyman.com and Facebook.com/NealShusterman. 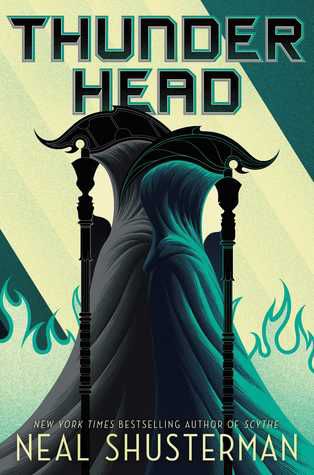 I often get asked about world-building. It’s something that I suppose I’ve done quite a lot of. For Scythe and Thunderhead, a huge chunk of the writing process was creating a thought-provoking world, and I took great pains to make sure it wasn’t like any world we’ve seen before. On top of that, the world had to be relatable, so readers could feel as if they’re smoothly slipping into it, rather than being assaulted by it. The reality must feel larger than the pages of the book, because it needs stay strong and true for the entire Arc of a Scythe series. If it starts to crumble anywhere along the way, the story crumbles with it.

World-building implies more than writing a story. It’s not just populating a tale with characters, it’s building a freaking world. It is, perhaps, one of the most difficult things a writer can do—and yet, it seems it’s always the first thing that fledging writers want to tackle. It’s like saying, “Hmm…I’ve always wanted to be a doctor. I know—I’ll start with brain surgery!” I mean, that’s the fun part, right? Who wants to make some red-tonsilled kid say “ahh” when it’s so much more interesting to remove the bicycle handlebar wedged in the kid’s brain.

I can say this because I, like everyone else, did the exact same thing in my first novel, which has never been published and never will be. It’s a book that I wrote when I was eighteen and thought I knew everything. The story is called Duke, and is filled with truly bad world-building.

Duke is named after my favorite album of 1980 by the band that is still my favorite band of all time: Genesis. Genesis was known for concept albums, but the concept of Duke was so frustratingly vague that it could really be about anything. So I made up my own story inspired by the music. The book is about this dude named John Dimnoggin. (Wow—clever name.) John was a nerdy, lonely guy who fell in love with a beautiful but unattainable rock star, and then one day he read a fantasy book and he right fell into the pages. (How terribly original.) And who happens to be there once he falls into the book? Why, the rock star! And it’s a world with swords and sorcery in a kind of medieval time like Lord of the Rings—only really, really bad. Oh, and a Pegasus, because wouldn’t it be cool if he rode a Pegasus?

So, anyway, there’s a diamond sword that he finds and they hail him the true ruler of the kingdom. But the evil kingdom next door doesn’t like that too much, and their king, a bad guy named Vellup (Really? Vellup?) wants to rule both kingdoms, but the prophecy says Duke will rule both kingdoms—and John, aka Duke, marries the rock star, who for some reason doesn’t remember she’s a rock star and has absolutely no logical reason to be in this other world.

Oh—and did I mention the ghost? Yes, there’s a ghost who comes at key moments and whispers sweet little expositions into John/Duke’s ear when the convoluted and confusing plot gets so convoluted and confusing we need someone to explain what the heck is going on. Then one day, when the ghost creeps up on him, Duke swings around his big diamond sword—and kills the ghost. But, if he’s a ghost, how can he be killed with a sword, you ask. Well, it’s my world. Who says it has to be consistent and who says it has to make any logical sense whatsoever? Diamond swords can kill ghosts, okay? Why? Because I said so.

So, without the ghost to help Duke out, Vellup decides its time to have a great war in the desert. Wait—what desert? Where did the desert come from? I don’t know, but deserts are cool places for a battle because you can see like a gazillion troops coming over a sand dune, and it’s way dramatic-like. So, Duke/John leaves his wife, the amnesiac rock star, and rides off for the big battle, kills Vellup, and flies his Pegasus into the setting sun only to find himself lying on his bed next to the book that’s turned to the last page. And where does he go from there?

Times Square! Because it’s really cool to end a story in Times Square. And there, somewhere down around 42nd street, between the marquis for Annie and Cats and whatever other shows were playing on Broadway when I was eighteen, he sees her—the rock star—and they push through the irritating tourists in their way, and John and the beautiful rock star embrace and everyone lives happily ever after. Except for the thirty editors who wrote:

Thank you for your submission, however it does not meet our editorial needs at this time.

As a freshman in college, I had a writing professor who said to me the two wisest words I had ever heard: “Stop that.” And so I did. As hard as it was, I stopped trying to build worlds and learned how to build characters and relationships and stories. And I discovered that I loved it. I loved getting into people’s heads as much as I enjoyed wild fantasy.

Getting into characters’ heads—that’s like its own type of brain surgery. And, after several years and several books, I took a shot at world building and you know what? With the grounding in character, and experience with storytelling and descriptive language within our world, I somehow became a better world builder.

So, for all of the fledgling writers out there who are in love with magical, mystical, supernatural, and larger-than-life alternate realities, I would offer two words: “Stop that.” Don’t stop it forever, but challenge yourself to tell real stories about real people and real places. Learn the craft of writing before attempting brain surgery. And, once you do, all worlds will be your oyster!