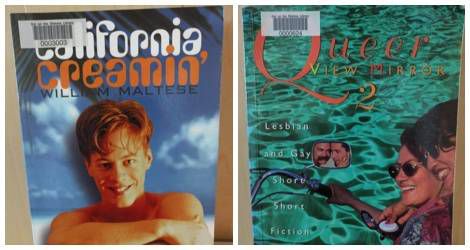 Along with another librarian-in-training, I recently took on the job of coordinating an LGBTQ+ library called “Out on the Shelves.” One of our first tasks was an extensive weeding project (i.e., deciding which books to remove from the library). We knew that a lot of the books we had were older. But we had no idea how majestically awful and hilariously cheesy some of the gay book covers we would find would be. This is a list of my personal favourites from the weeded books: some of them are so bad they’re good, some of them are so bad they’ve gone past good and back to bad again, most of them are so ’90s it hurts. Two notes: 1) let it be known I have the utmost respect for my queer elders, even though they may have made some questionable choices regarding cover photos and copy writing; 2) sorry GBQ dudes, I’m not trying to single you out, but most of these books are written by and for you. I guess you should take it as a compliment. 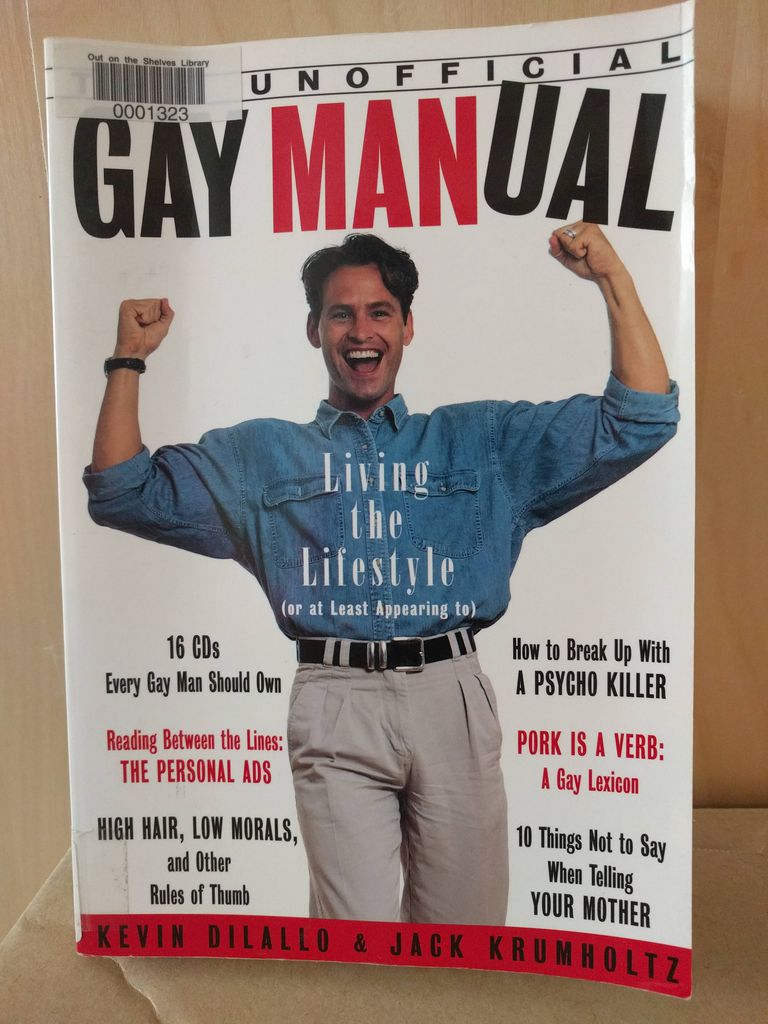 There is really nothing that’s not amazing about The Unofficial Gay Manual (See what they did there? So clever). That guy is so psyched about being gay, the ’90s, and being gay in the ’90s. I have no doubt he is living the lifestyle to this day, from having the gayest CD collection ever to integrating “to pork” into his vocabulary. 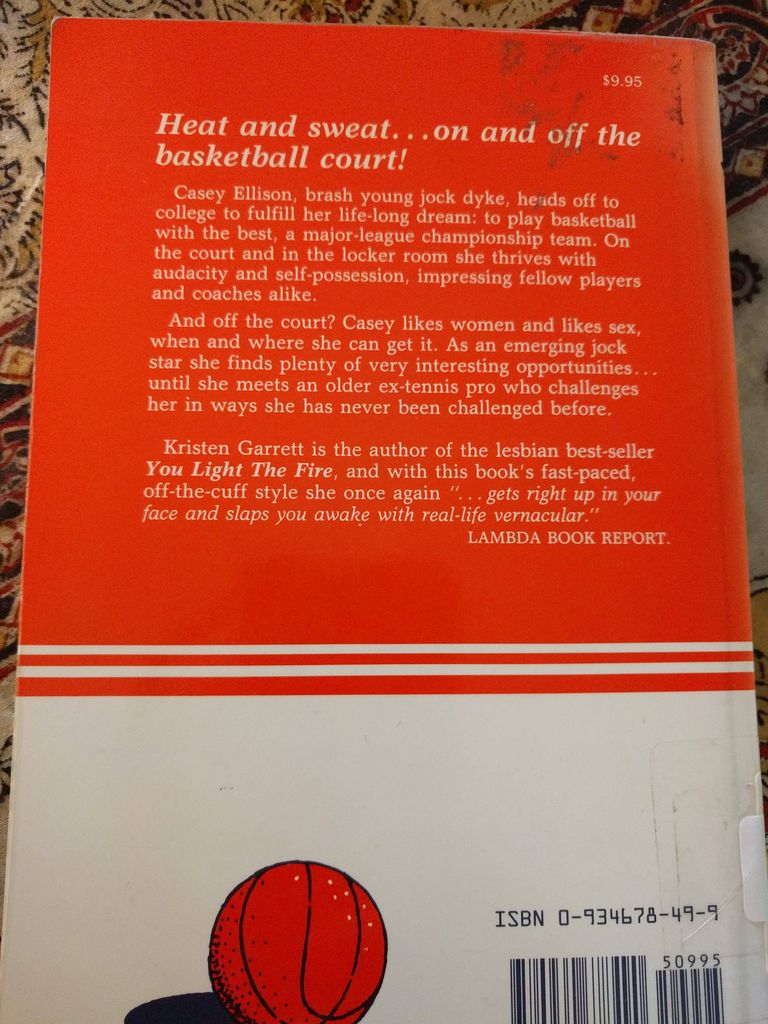 At first glance, this book may not be that exciting. After all, I’m only showing you the back cover of Lady Lobo. But please read the blurb in its entirety. In addition to being super pumped to share a name with this book’s undeniably sexy main character, I also have to applaud this copy writer for their outstanding use of ellipses (not once, but twice) as well as for inventing the phrase “brash young jock dyke,” an apt description of a lesbian archetype and many of the women I was attracted to in my early twenties. 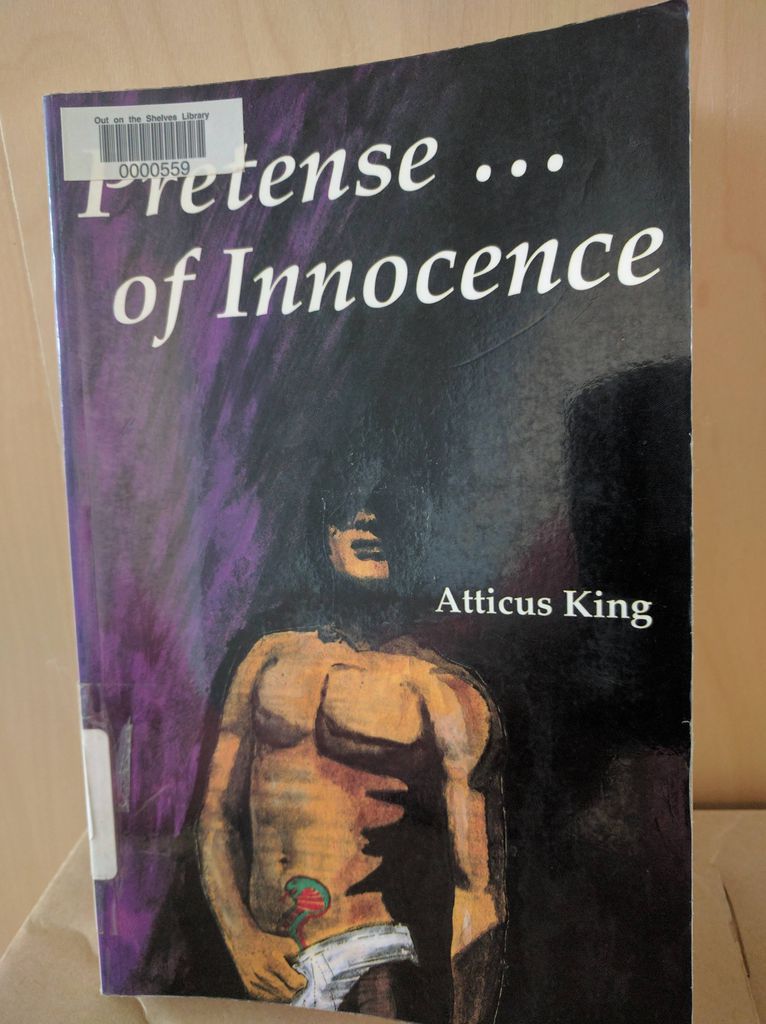 This is another example of an excellently executed use of ellipses, right there in the title of the book. In case you’re thinking Pretense … of Innocence is a little tamer than some of the other books I chose for this post, may I draw your attention to the snake that appears to be crawling out of this [strangely headless] man’s underwear. Does that… have some kind of symbolic meaning? 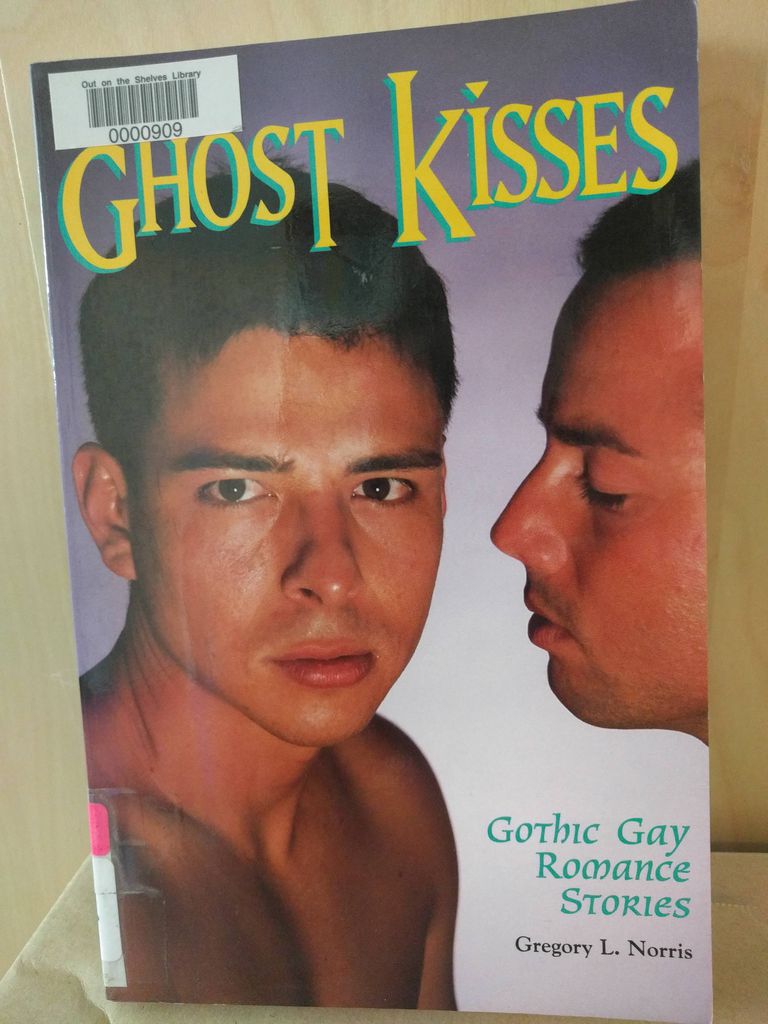 Ghost Kisses admittedly has kind of a terrifying cover, although perhaps not in the way the author had in mind. Is the guy on the right supposed to be a ghost, explaining why the guy staring into the camera appears to not know he is there? And what exactly is the look on his face? I suspect he was going for scared and yet turned on at the same time, a balance I don’t think he has quite struck. The ghost, on the other hand, appears ready to munch on the other guy’s ear. 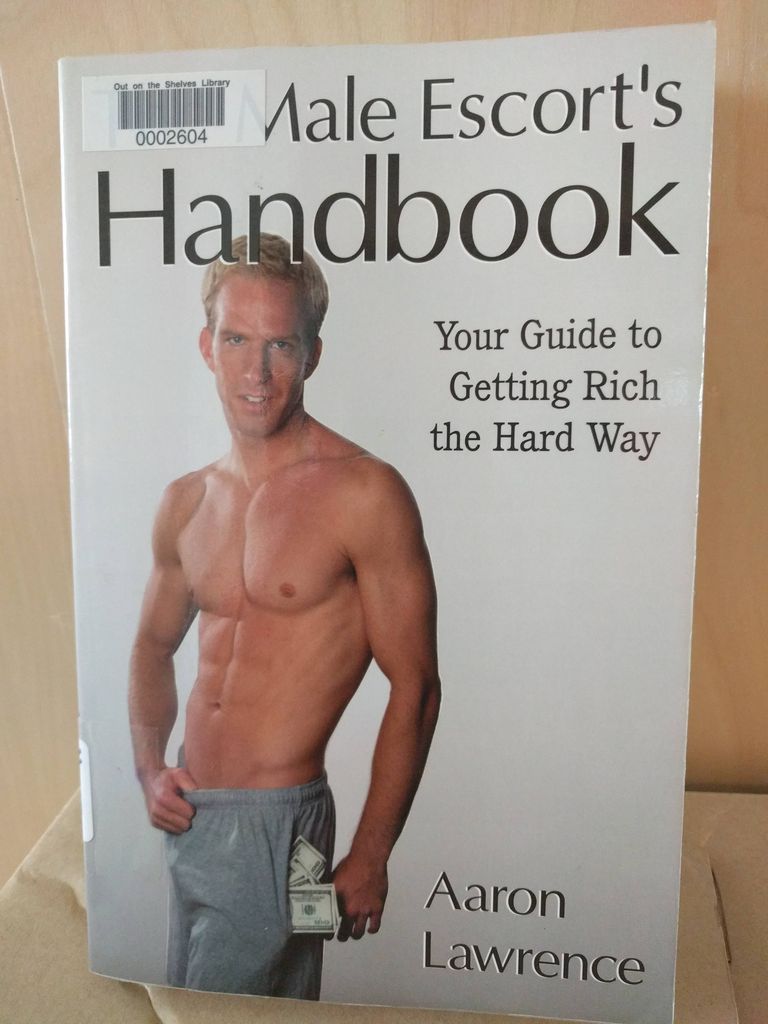 Clearly, whoever wrote and designed the cover of The Male Escort’s Handbook is a master of publishing and marketing, not to mention punning. The subtitle alone is gold. The cash falling out of the pocket of his sweatpants (are those sweatpant shorts?!) is the icing on the cake. 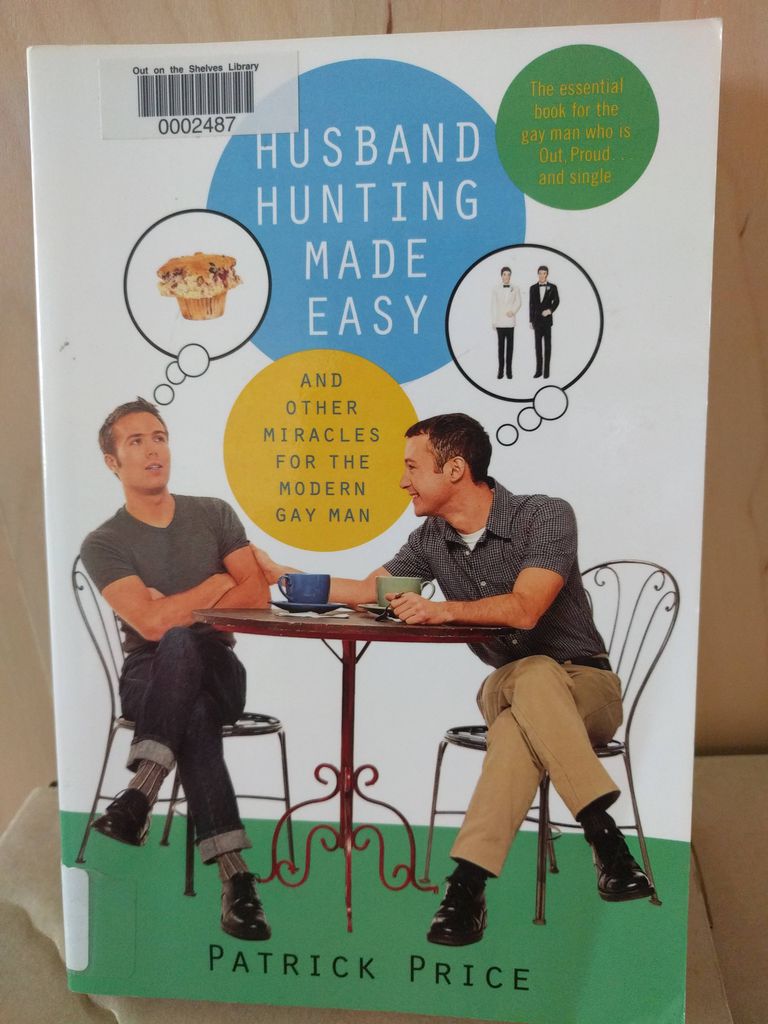 I’m imagining the editorial brainstorming that went into making the cover for Husband Hunting Made Easy. They were like, okay one guy’s gotta have marriage on the brain, so we’ll put a picture of two male cake toppers in his thought bubble. One person said “Yeah, but what’s his date gonna be thinking about then?” They looked at the boardroom table, full of coffee and pastries, and voila, they decided on a muffin. A half-eaten muffin, no less. 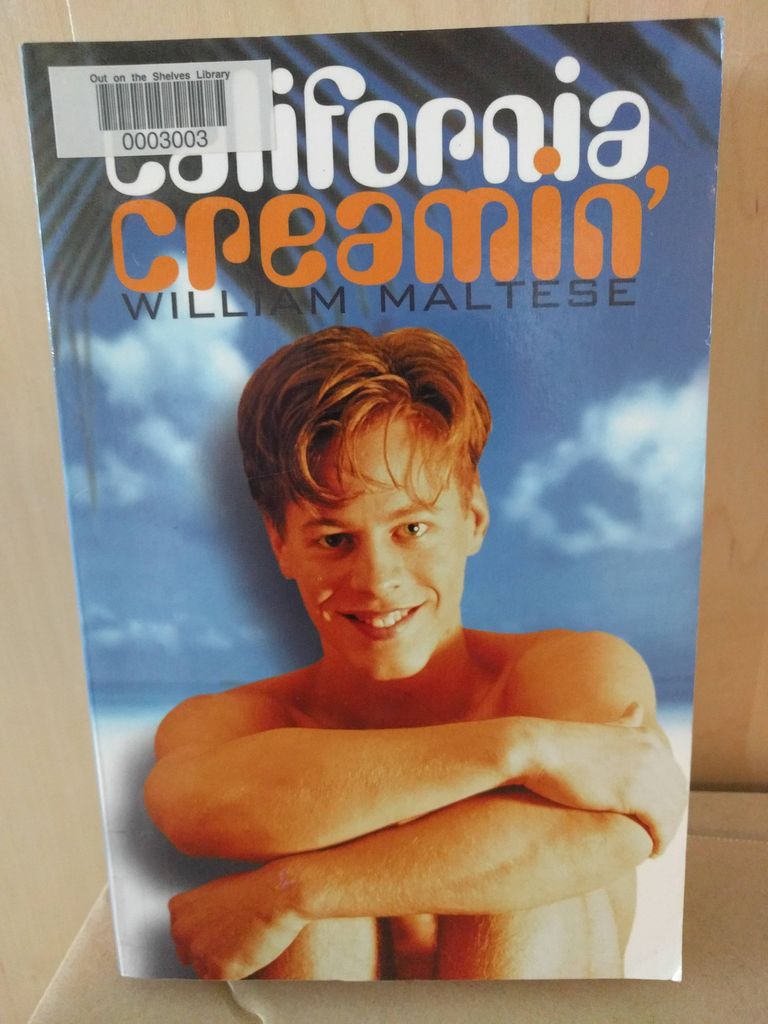 California Creamin’ definitively establishes queer men in publishing in the ’90s as masters of the pun. Not to be outdone by the dreamy Justin-from-Queer–As–Folk-lookalike and sassy puns on the front cover, the back cover proclaims California Creamin’ to be a book about “sunny days and dark, dark nights.” 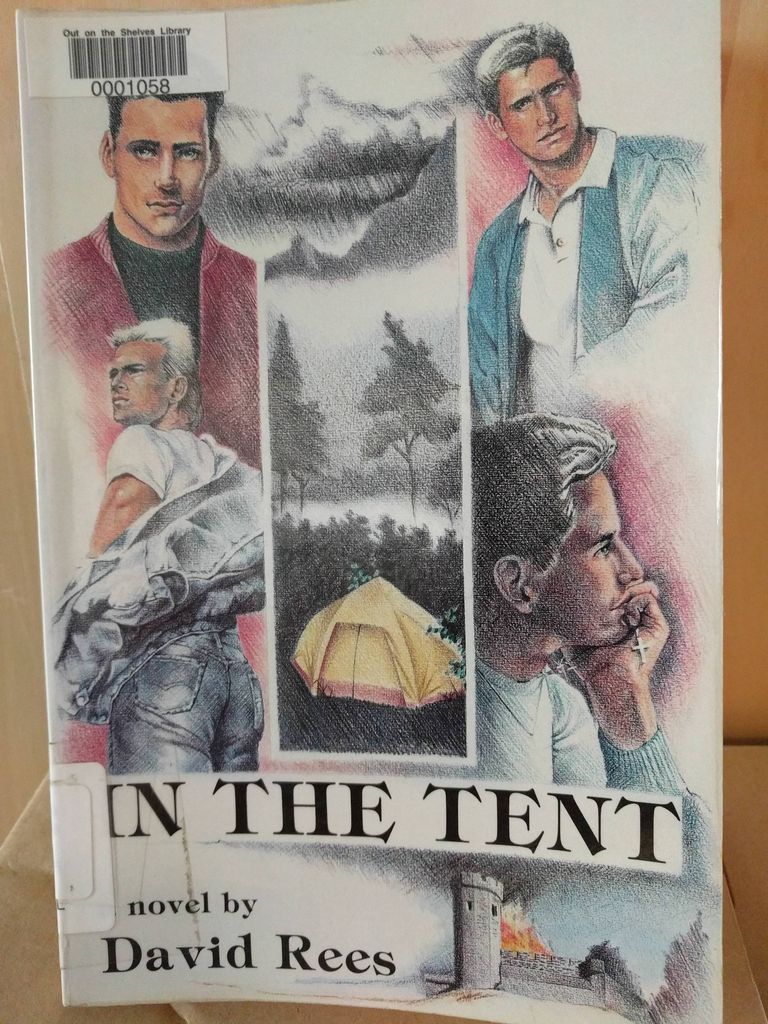 There is so much going on on this cover, I just don’t know where to begin. I mean, the title: it’s a clear nod to the secret knowledge queers everywhere have that if forced to share a tent with someone of the same gender, even the straightest of straight people might turn a little gay. There are so many symbols and other literary devices on the cover—is that a storm raging while the closeted gay character fights inner turmoil?—that this book seems crying out for a high school English class analysis. 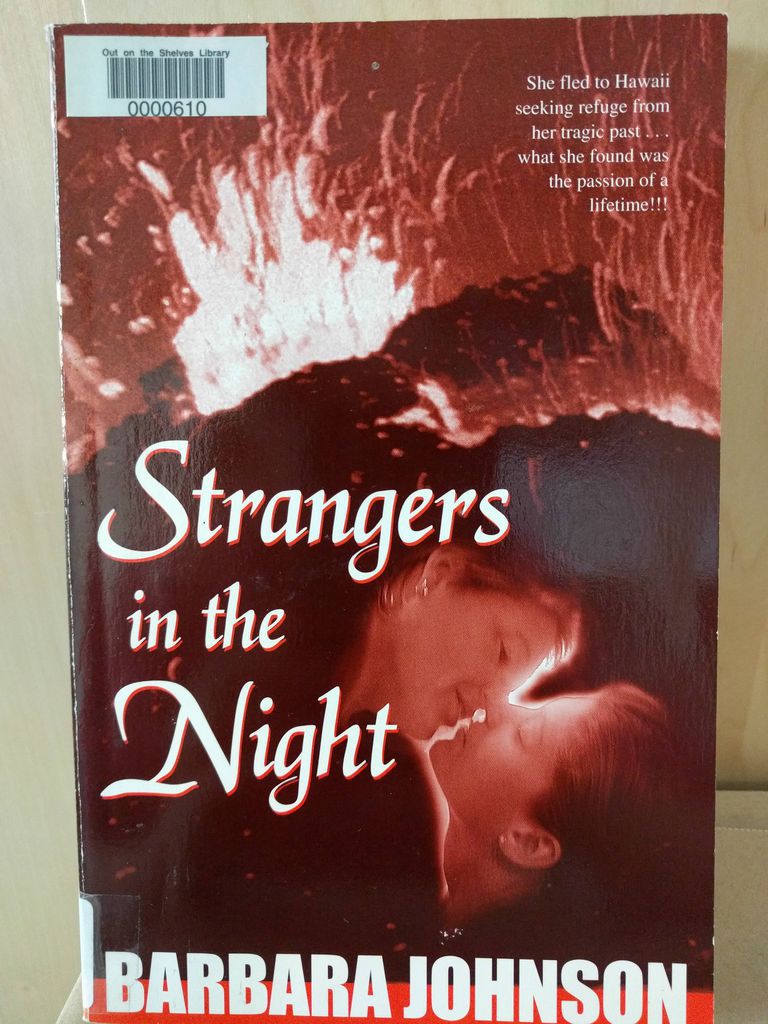 Clearly the erupting volcano in the background is a nod to the Hawaii setting of this ’90s lesbian romance, but could it also have another meaning? Also note the careful use of not one, not two, but three exclamation marks in the upper right-hand corner to emphasize just how passionate this affair truly is. 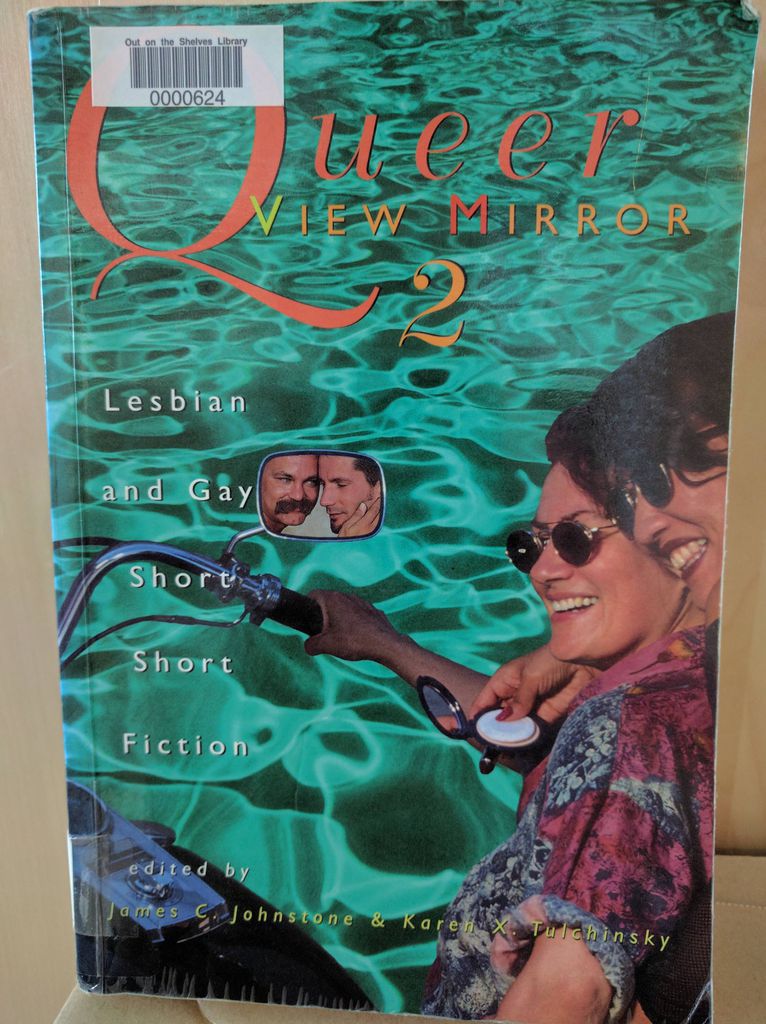 Boy, those two dykes sure look like they’re having fun riding a motorcycle… on top of a pool? While retouching their make-up using a compact mirror? While two men, one of whom has the bossest mustache ever, gaze suggestively into each other’s eyes at the perfect angle to be reflected in the women’s rear view, excuse me, queer view mirror?