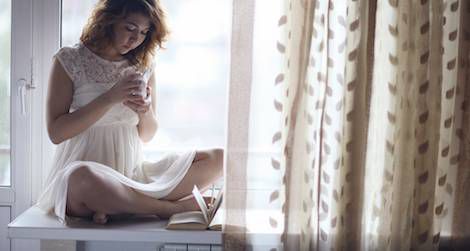 This is a guest post from Carolina Ciucci. Carolina is a book-hoarding, coffee-drinking, wine-loving professional bustler. Lit student, English/Spanish teacher, European Lit TA, @PixelProjectvolunteer. She never saw a project she didn’t like. Follow her on Twitter @wutheringreads.

“Wait, you mean you actually read this?” I get this question every once in a while, when I happen to mention that I’m reading a romance novel. So far, nobody has added the word “trash” before the question mark, but the condescending tones and the raised eyebrows make sure that I hear it anyway, loud and clear.

Every time somebody dismisses romance novels to me – or, worse, assumes that as a Serious Student of Serious Literature I do too – a fluffy little angel loses its wings. Here’s the deal: I love romance novels. It’s largely a genuine appreciation of it as a genre, and it’s partly gratitude for one simple fact: romance novels helped carry me through depression.

I was diagnosed with clinical depression at 19, shortly after starting university. Given that I could barely pull myself out of bed at the time, let alone care about Russian formalism or how to read between the lines, I dropped out in my second semester. I was privileged enough to have a wonderful, loving family that didn’t hesitate to continue to support me, both emotionally and financially, while I was doing quite literally nothing. A few years, a lot of antidepressants, and hundreds of hours of therapy later, I’m finishing my degree and work two jobs that I love.

But what does that have to do with romance, you ask? Well, you see, the only classics or literary fiction I could deal with at the time were those with happy endings. Now, this is shocking information, I know, but most classics are not prone to ending happily. I’m all for Dostoyevsky and Plath, but I think we can all agree that they’re not what one would call comfort reading. So, instead, I turned to romance novels.

Every time I finished a novel, I felt energized. If the heroine could beat murderers, scheming co-workers or wrathful Celtic gods, then I could damn well face my own misbehaving neurons. If she could own up to her mistakes, launch a successful career or pull through PTSD, then I could go back to school, even if one or two courses per semester were all I could handle at the time. I was inspired by romance novels every bit as much as I’d once been by A Christmas Carol or Little Women.

In truth, I have enjoyed romance as a genre ever since I was a kid (and maybe younger than I should’ve been). But what I felt for them during those years was more than simple enjoyment – they gave me faith that I could carry on and, if not completely beat my depression, sneaky chronic bastard that it is, I could at least learn to live with it. Build a satisfying life, maybe even find my own happily ever after. Because here’s another thing romance novels did – they let me know that happily ever after doesn’t mean hardship-free. It doesn’t mean not facing pain, or death, or loneliness. Happily ever after means accepting yourself and your circumstances, and making the best of them.

While I typically answer the aforementioned question with a simple ‘yes’ (and perhaps a death look for good measure),  this is what I really mean by that one word answer: Yes, I actually read this. Yes, I enjoy it. No, I don’t consider it a guilty pleasure. And I can tell you that a) I’m not even a little bit embarrassed, and b) I’m better off for it.