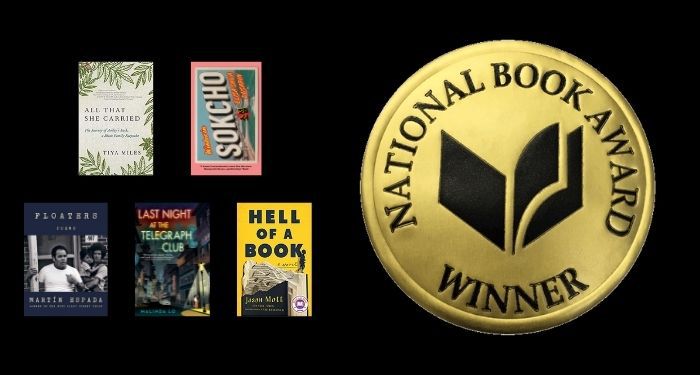 The mission of the National Book Foundation is to celebrate the best literature in America, expand its audience, and ensure that books have a prominent place in American culture.

Each year they award $10,000 and a bronze sculpture to the best books in five categories: Fiction, nonfiction, poetry, translated literature, and young people’s literature.

In a live-streamed ceremony hosted by Phoebe Robinson, author of You Can’t Touch My Hair And Other Things I Still Have to Explain, Everything’s Trash, But It’s Okay, and the newly released Please Don’t Sit on My Bed in Your Outside Clothes, the winners were announced on Wednesday, November 17, 2021.

The announcer was Dion Graham, audiobook narrator and actor.

The finalists for the National Book Award for Fiction were:

An additional five books were long-listed:

Nonfiction Winner – Tiya Miles, All That She Carried: The Journey of Ashley’s Sack, a Black Family Keepsake

Finalists for the 2021 National Book Awards in Nonfiction include:

Hanif Abdurraqib, A Little Devil in America: Notes in Praise of Black Performance

Lucas Bessire, Running Out: In Search of Water on the High Plains

Nicole Eustace, Covered with Night: A Story of Murder and Indigenous Justice in Early America

Scott Ellsworth, The Ground Breaking: An American City and Its Search for Justice

Heather McGhee, The Sum of Us: What Racism Costs Everyone and How We Can Prosper Together

Louis Menand, The Free World: Art and Thought in the Cold War

Clint Smith, How the Word Is Passed: A Reckoning with the History of Slavery Across America

The chair for the nonfiction award was Nell Painter and the other judges were Eula Biss, Aaron John Curtis, Kate Tuttle, and Jerald Walker.

Desiree C. Bailey, What Noise Against the Cane

Hoa Nguyen, A Thousand Times You Lose Your Treasure

Jackie Wang, The Sunflower Cast a Spell to Save Us from the Void

The chair for the poetry award was A. Van Jordan and other judges were Don Mee Choi, Natalie Diaz, Matthea Harvey, and Ilya Kaminsky.

The finalists consisted of:

Nona Fernández, The Twilight Zone
Translated from the Spanish by Natasha Wimmer

Benjamín Labatut, When We Cease to Understand the World
Translated from the Spanish by Adrian Nathan West

Samar Yazbek, Planet of Clay
Translated from the Arabic by Leri Price

Maryse Condé, Waiting for the Waters to Rise
Translated from the French by Richard Philcox

Bo-Young Kim, On the Origin of Species and Other Stories
Translated from the Korean by Joungmin Lee Comfort and Sora Kim-Russell

Judith Schalansky, An Inventory of Losses
Translated from the German by Jackie Smith

Maria Stepanova, In Memory of Memory
Translated from the Russian by Sasha

The finalists for the Young People’s Literature Award from the NBA were:

Kyle Lukoff, Too Bright to See

Kekla Magoon, Revolution in Our Time: The Black Panther Party’s Promise to the People

Safia Elhillo, Home Is Not a Country

Paula Yoo, From a Whisper to a Rallying Cry: The Killing of Vincent Chin and the Trial that Galvanized the Asian American Movement

The Literarian Award for Outstanding Service to the American Literary Community was presented to Nancy Pearl by Ron Charles.

The Medal for Distinguished Contribution to American Letters was presented to Karen Tei Yamashita by Viet Thanh Nguyen.