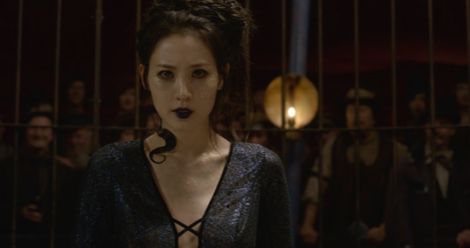 Editor’s Note: While we are no longer promoting J.K. Rowling’s works or products in light of comments she made against the trans community, this piece is a valid and important criticism of her work.

Last week, a new trailer of Fantastic Beasts: The Crimes of Grindelwald revealed a “twist” that J.K. Rowling has apparently been keeping under wraps for 20 years: that Nagini, Voldemort’s pet snake who often did his bidding for him by murdering and eating his enemies, is, in fact, an East Asian woman.

While J.K. Rowling might have meant this as a mind-boggling twist or an attempt to racially diversify the cast and crew of a franchise that is overwhelmingly white, it is anything but.

In fact, the entire concept is layered with problems. The first layer is that not only is Nagini a person, she is a woman. Despite no indication in the books that Nagini was anything but a snake, Rowling has made her a woman. A woman possessed and enslaved by one of the worst human beings in any universe. She kills and eats Voldemort’s enemies and her venom is taken from her to help sustain his life. Not only that, but from the original series, we also know that Nagini meets a horrid end, which perhaps isn’t so bad when she is simply a snake, but is pretty terrible when she is a human being who is a servant to Voldemort.

But not only is Nagini a woman, she is an East Asian woman – one of only two in the entire Harry Potter universe. The only other named East Asian character in the entirety of the franchise, which consists of hundreds of characters, is Cho Chang (many fans, particularly East Asians, have spoken about how the Cho Chang character is deeply problematic).

So why is it more problematic for Nagini to be East Asian? First, because here is an apparently East Asian character who spontaneously became East Asian decades after the original series ended. Some might call this shoehorned representation, a last minute change meant to pander to a 2018 audience that’s much more sensitive to cast diversity. Secondly, for one of the only two East Asian characters in the series to be an actual animal for the majority of the franchise and a literal pet to the most evil person in the universe sets off many alarm bells.

Plus, the whole thing is rife with stereotypes. As many people have already pointed out, the Nagini character’s portrayal bears a striking resemblance to the dragon lady stereotype which is most often associated with East Asians. The only other role that Nagini might fulfill in the movie also falls into a stereotype: of the submissive Asian woman. On top of that, Western culture already has a long history of portraying East Asians as non-human monsters. This is simply another addition to that dehumanising portrayal.

The entire concept of Nagini as an East-Asian woman is also a stark insight into J.K. Rowling’s ignorance when it comes to the cultural diversity of Asia. The name Nagini is derived from the Sanskrit word “naga,” meaning snake or serpent. Naga also refers to semi-divine creatures in Hinduism, Buddhism, and Jainism who can take a half-human, half-snake form, or even a fully human form.

When fans on Twitter called Rowling out on her lacklustre attempts at representation, she replied, “The Naga are snake-like mythical creatures of Indonesian mythology, hence the name ‘Nagini.’ They are sometimes depicted as half-human, half-snake. Indonesia comprises a few hundred ethnic groups, including Javanese, Chinese and Betawi.”

The Naga are snake-like mythical creatures of Indonesian mythology, hence the name ‘Nagini.’ They are sometimes depicted as winged, sometimes as half-human, half-snake. Indonesia comprises a few hundred ethnic groups, including Javanese, Chinese and Betawi. Have a lovely day 🐍

While Indonesia does have mythology about the Naga, the origins are rooted in Indian mythology, culture, and tradition. Moreover, Rowling seems to think that Indonesia and South Korea are interchangeable, as the actress for Nagini is not, in fact, Indonesian.

Perhaps if all of this had happened in isolation, we could give Rowling a pass for ignorance. But this is simply another failure at representation, and at actually listening to the voices of the marginalised, by Rowling, whose series places so much importance on accepting people regardless of things such as blood status, and fighting for justice for those who are marginalised.

Fantastic Beasts got off on the wrong foot with J.K. Rowling appropriating Native American legends to set up the American magical community while simultaneously failing to include any Native Americans in the franchise. The movie also managed to include only one black character, who had a relatively minor role, despite being set in 1920s Harlem, famously known for the setting of the Harlem Renaissance where African American creatives and intellectuals became prominent.

More recently, Rowling has also been criticised for supporting the casting of Johnny Depp as Grindelwald, a man who physically and verbally abused his ex-wife, Amber Heard. The Crimes of Grindelwald was also criticised for suggesting that Dumbledore will not be “explicitly” gay in the movie, despite Rowling revealing his sexuality specifically in the context of his love for Grindelwald.

While the year is 2018, Rowling might as well be stuck in 1997 when the first Harry Potter book was released. While the rest of the book community, particularly the kidlit community, have been striving for diversity in all areas, Rowling seems to be stuck in a world where gay people are only gay in theory and not on screen/page, and people of colour only exist to be sidekicks (if we’re lucky) and stereotypes. It’s disappointing that a series that fought for the downtrodden is now determined to keep treading on the marginalised.