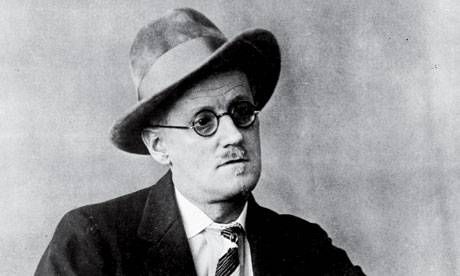 This is a guest post from Elizabeth Allen. Elizabeth’s work can be found at www.blackwhitereadbooks.com, where she is currently reading and reviewing all of the books referenced on Gilmore girls. She is also the cohost of two podcasts discussing the work of Amy Sherman-Palladino (“Under the Floorboards” and “Stumbling Ballerinas”). Basically, her entire goal in life is to be a bookish Lorelai Gilmore. She clearly dreams big. Follow her on Twitter @bwrbooks

How many Joyceans does it take to make Elizabeth read Ulysses?

One to call Elizabeth a swear word rhyming with bassdole.

Two to reverse all the damage inflicted on Elizabeth’s already-fragile psyche by the first two.

My reading challenge recently brought me to the precipice of a scary cliff. Ulysses. So I took the hands of Stephen Dedalus and Leopold Bloom… and leapt into that bowl of lather.

As the entire sentient world knows, Ulysses is not an easy undertaking. There is a reason study guides abound and even 92 years later, Kevin Birmingham released a discussion of the impact Ulysses had on the publishing world in June 2014 (The Most Dangerous Book: The Battle for James Joyce’s Ulysses). Joyce’s version of the events in Dublin on June 16th, 1904 have become a part of the culture as the ultimate in accomplishments for people who consider themselves readers (as we’ve seen in Book  Riot’s own surveys about the books people pretend to have read… Ulysses makes a rather impressive appearance at slot #2).

I read that infamous first line “Stately, plump Buck Mulligan…” on April 22, 2014. And didn’t reach “…and yes I said yes I will Yes.” until July 10, 2014. And in between those two sentences, my experience with the Joyceans was equal parts terrifying and exhilarating.

When I announced that the next book in my challenge was to be Ulysses, I received a good amount of support. Lori from The Broke and The Bookish was an especially beloved cheerleader, as she was attempting this reading at the same time (with the goal of completing by Bloomsday… spoiler alert: we both failed miserably). I don’t receive a ton of comments on my humble blog, but for the most part, people were interested in reading about my experiences with Ulysses.

And then I received my very first semi-negative comment on my blog in three years. I had posted about having difficulty getting the speech patterns in Ulysses and contemplated listening to it on audiobook. And while I know a lot of people argue this point, I wholeheartedly believe that audiobooks are considered reading. Do I know what happened in that book and can I speak intelligently about it after having listened to it? Yes? Then it’s reading.  ::bangs gavel:: This particular post prompted someone telling me that it was too bad that I was going to give up on something just because it was difficult.

I should’ve realized at this moment that Mr. Joyce has some rather passionate and opinionated fans.

While continuing through this literary angst, I posted a few articles and comments I discovered while searching the World Wide Web for comrades in arms… looking for readers who had no problem reading War and Peace but had become mentally and emotionally exhausted while trying their page-turning hand at Ulysses. My discussions surrounding this book were both tongue-in-cheek and self-deprecating… as I had convinced myself that my struggle with this book was a character flaw and a moral failing.

And it appears that some people agreed.

While I’m generally someone who likes to do things solely out of spite, the people calling me a “bassdole,” ranting that I just “didn’t get it,” weren’t the ones to inspire me to continue on. And their reaction made me realize something about how we need to act as true fans of literature.

Too long, we have worn our literary snobbery as a badge of honor.  We felt self-important for “getting it” while others didn’t. We patted ourselves on the back as each member of the mainstream professed their hatred for a book we (and The New York Times Book Review) loved.

However, if we love something as much as we proclaim, shouldn’t we be trying to help others get the most out of our beloved work? I started to understand the danger behind being unable to see past our own experience with the thing we love so completely. As a fan, isn’t our job to extol the virtues of the work… to try to convince others to just give it a chance? To give them an opportunity to see in it what we see?

In the end, it was that second type of Joycean- a lovely Tumblr blogger that took the time to actually provide me tips and suggestions on how to make my way through Ulysses– that gave me the emotional strength and self-confidence to get through a book I know I will always see as my personal reading Everest. This blogger’s tips acknowledged Joyce’s deliberate intention to confuse and frustrate his readers. She admitted that anyone who claimed to fully “get” a work such as Ulysses did not quite understand the story in the spirit with which the writer intended. She provided me hints and clues within the text to look for that would provide me a better understanding of the work. And most importantly, she made it okay for me not to “get” or enjoy Ulysses. And to truly enjoy reading, we need to feel safe enough to say “I know that book meant a lot to generations of people… but it was just not for me.”

In the end, I can say I enjoyed Ulysses. Can I say I understood all of it? Half of it? Even 1/12th of it? Probably not. But since I closed the back cover, I have been thinking about the message Joyce gave to his readers through Ulysses. And isn’t that the most important accomplishment of any literary work?

Andplusalso, I am a “bassdole” for plenty of other reasons.  You don’t need to invent new ones for me. Thanks!